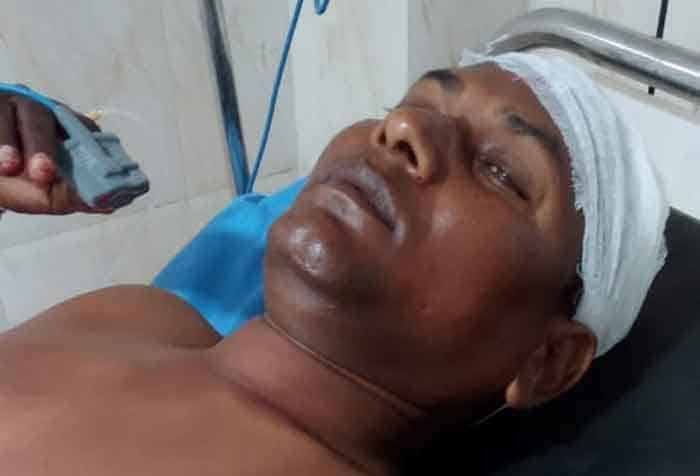 A brutal attack by unidentified religious fanatics on May 27, in Mau district in the state of Uttar Pradesh in the Madhuban police station area has confined Pastor Dinesh to the ICU with severe injuries, including 16 stitches on his head and 7 stitches on his arm.

After praying at a church member’s home, it had only been a few minutes of riding away before he stopped by the wayside to relieve himself. Hearing some noise behind him, he glanced behind only to be hit by a wooden rod on his head. Falling to the road in pain, he saw 4 raging men wielding wooden rods and knives. Before he could comprehend the situation, the fanatics began to mercilessly thrash him. His fight to fend for himself weakened when one of the fanatics swung a wooden rod with great strength against the back of his head. The Pastor found himself in a daze as he watched his assailants flee from the scene.

Speaking to Persecution Relief, Mamta, Pastor Dinesh’s wife, painfully recalls the series of events that took place on the 27th of May 2020. “I was unwell that day. My husband had just returned home after getting me some medicine. During the late hours of the morning, a lady from our church called to ask my husband to come and pray for her family. Since the family lived almost 20kms away, my husband asked if he could pray over the phone instead, but her husband then tried to persuade the pastor to come.” Mamta explains that in spite of trying to come to an understanding given the restrictions due to the Covid-19 crisis, the family kept calling and coaxing her husband to come just for a word of prayer. Pastor Dinesh was also aware of Mamta’s condition but because the family seemed desperate, Mamta herself convinced him to go.

It was 3pm in the afternoon that day when Mamta last seen her husband in a hail and hearty condition. He made his way on his motorbike to Mazipur, a village that he would reach in about an hour. After reaching the home of the family, Pastor spent time chatting with them after which they began to pray together. The prayer meeting went on for the next couple of hours. Once the pastor concluded the meeting, he hurried back home on his motorbike, keeping in mind his ailing wife who was waiting for him. Sadly, both Pastor Dinesh and Mamta did not anticipate this ordeal.

Pastor Dinesh was taken to a private hospital which is around 18kms from his home. He was admitted into the ICU unconscious and with grave injuries. His body is covered with cuts from the knives and his arms and feet are swollen and blue. He has also received 16 stitches to his head and 7 stitches to his arm. The attack took place on the Madhuban road and a complaint has also been filed at the Madhuban Police Station to this effect. The Police have already begun investigations but have not identified the assailants yet.

Pastor Dinesh and his wife Mamta live in a village called Jamalkul which features in Mau, a district in Uttar Pradesh, the largest state in India. Regular Sunday Prayer meetings are conducted at another village which is around 12kms away from where they live. The Church congregates on a property of their own which is also known as Prarthna Bhavan (Prayer House). Around 50-60 people gather on an average every Sunday.

At present, Mamta’s brother has been a great source of help to her. She is presently struggling all alone. Financially, the family is not very well to do. With Medical bills soaring through the roof, Mamta has kept her property papers as surety with an acquaintance in exchange for Rs15000. Filled with grief, Mamta was in tears as she confided with our Persecution Relief representative, “I have also managed to collect a few thousands from nearby relatives as Pastor Dinesh is in the ICU at a private hospital and bills have already crossed Rs35000.” Persecution Relief greatly encouraged and comforted her during this challenging time and is currently supporting Mamta financially, to help her cover the huge medical expenses which she has to bear.

In 2019, Persecution Relief recorded 109 cases of Christian Persecution in Uttar Pradesh and a dreadful 47 cases in the first quarter of 2020 alone, causing the state to maintain its disturbing title of the ‘Most Hostile State’ towards Christians in India.

US Commission on International Religious Freedom (USCIRF) ranked India’s persecution severity at “Tier 2” along with Iraq and Afghanistan. Over the past seven years, India has risen from No. 31 to No. 10 on Open Doors’ World Watch List, ranking just behind Iran in persecution severity.

US’ youngest Congresswoman-elect can’t afford rent
Communal violence in the country up by 25% in first five months of 2015 #acchedin
Rights on Minerals Should be Vested in Tribals'
Bihar - Dalit boy burnt to death: NHRC issues notices to Chief Secretary, DGP