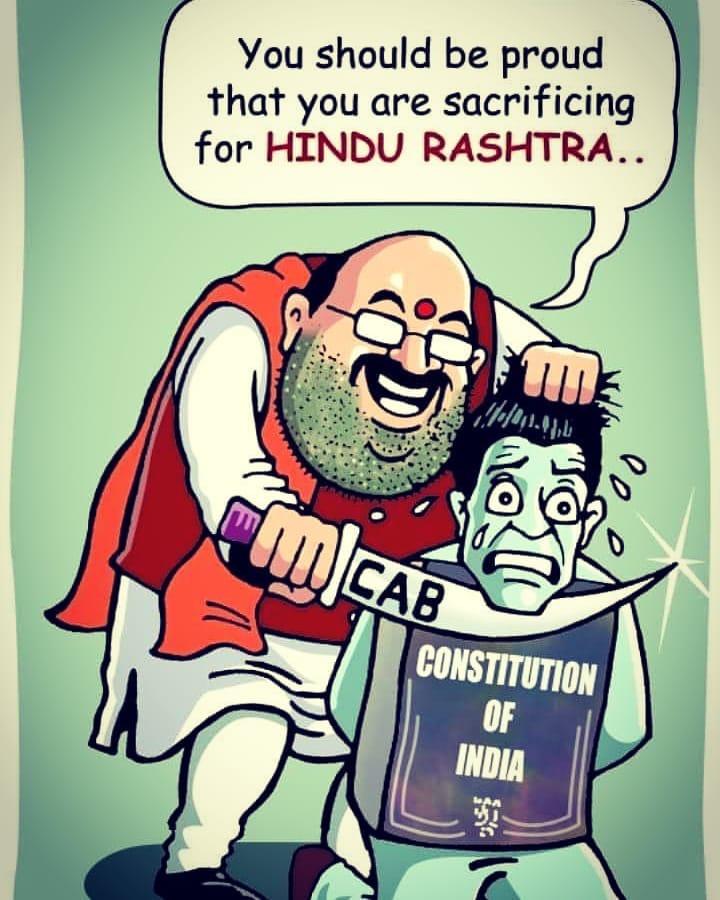 CAB, NRC have nothing to do with protecting those being persecuted but with persecuting those who are protected

Before I start with my weekly socio-legal gyaan, let me share an interesting story with you. ‘The Principles of Moral and Political Philosophy’, a book by William Paley, contains an anecdote about a king named ‘Temures’ (another source says he was referring to the Turco-Mongol-Persianate conqueror Timur or Taimur). Temures promised the garrison of Palestinian village Sebastia that “no blood would be shed if they surrendered”. They surrendered. He buried them alive, without shedding a drop of blood.

I wonder if Timur was digging graves while he waited for those inside the garrison to decide. If he was digging graves and if you had been there and if you happened to know Timur’s history and nature and could have seen these events I suspect you might have screamed and cautioned the people inside the garrison against surrendering. Look beyond the words of the promise; why would he be digging graves if he intended to keep his promise you might have argued. I imagine that in the face of your exhortations, Timur’s soldiers would have argued: ‘this man is trying to mislead you, our king is a peace-loving man who treasures life above all else’. You might have been sympathetic if the audience remained confused. On the face of it, the words which constituted the promise seemed harmless. The deceit could be understood, only if seen together with the graves being dug.

Let’s come to the present day and the present challenges. The government has tried to sow a great deal of confusion about the hotly debated Citizenship Amendment Bill (CAB). All we want to do is give refuge and citizenship to the ‘persecuted’ members of six religions – Hindus, Jains, Parsis, Christians, Sikhs and Buddhists from three countries, namely Pakistan, Bangladesh and Afghanistan. Who can possibly have a problem with this, they ask. They say this law does not take citizenship away from anyone, leave alone Indian Muslims. To the question that if the desire is to protect the persecuted why not the Tamilians in Sri Lanka, or the Ahmadiyyas in Pakistan or atheists in Bangladesh or the Uighurs in China or the Rohingya in Myanmar, the answer is dismissal – because again, on the face of it let’s assume, they’re saying that out of all these communities they want to save only a few. They’re still saving people. They describe the bill as ‘humanitarian’. Prime Minister Narendra Modi has called it a law “in line with India’s centuries-old ethos of assimilation and belief in humanitarian values”.

The Bill alone is only half the story, only one piece of the puzzle. Many, including lay people who mean well and mean no harm, focus only on this and find themselves confused. One taxi driver asked me whether those who will be given refuge will come by road or will government send planes? Another said all parties opposing it are against the Hindus, if the government wants to rescue the Hindus what is the problem?

The other half of the puzzle is the NRC. After the completion of the NRC exercise in Assam, when it was revealed that a majority of those found to be illegally living there were Hindus, India’s Union Home Minister Amit Shah rushed to offer assurances. He said not a single Hindu, Buddhist or Parsi will be sent back from the country. An old video which has once again become viral has him saying that no one needs to worry because first the Citizenship Bill will come and then the NRC will follow.

It is another matter that Shah has now changed his tune and said in Parliament that one shouldn’t try to link CAB and NRC. There is a reason that almost every leading newspaper editorial, several Supreme Court judges, academics, scientists, legal luminaries, activists have expressed scathing and vehement opposition to the Bill, and why protests have broken out across the country.

CAB+NRC has nothing to do with protecting those being persecuted but with persecuting those who are protected, so far by the idea of a plural India and the Constitution of India. The CAB, unless expeditiously stayed and quashed by the Supreme Court, will act as a sieve for the aforementioned communities. With this protective cover for these preferred communities, NRC will be conducted across the country. Just like in Assam, lakhs of people will be condemned for clerical errors in identification papers, for not having identification papers. Just like in Assam, people will die standing in lines, countless will be driven to suicide, and after all this the final condemned will largely, if not only, be Muslims.

All this will happen only if we the people don’t defend India strongly enough, if we don’t educate (ourselves and others), agitate and organise to defend India and if the Supreme Court fails to stay and then quash this vessel of devastation in time which I have complete faith that it will, unless it also prefers Timur’s brand of interpretation.

Security personnel disperse protesters during curfew in Guwahati on Thursday

Untouchability Thrives In India Fighting the caste menace
Muslims stopped from praying in UP mosque, FIR filed
Yet another open letter to Modiji
Mowgli meets the Maoists: Satya Sagar #mustread