CJI Breaks Down in Front of Modi, Seeks More Judges 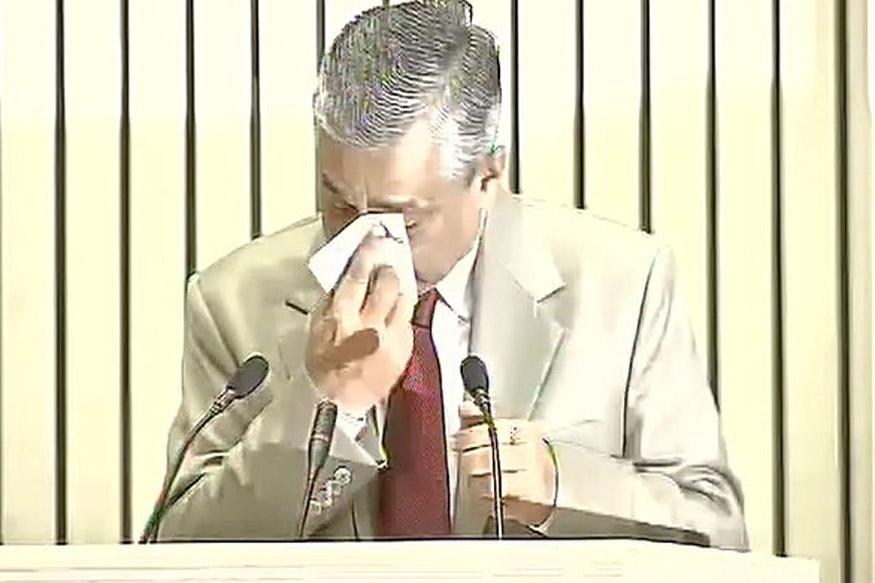 Chief Justice of India TS Thakur breaks down during his speech at a conference of Chief Ministers and Chief Justices of High Courts in Delhi. (ANI)

New Delhi: An emotional Chief Justice of India (CJI) TS Thakur on Sunday broke down in front of Prime Minister Narendra Modi and lamented “inaction” by the Executive in increasing the number of judges from the present 21,000 to 40,000 to handle the “avalanche” of litigations.

Modi later assured Thakur of Centre’s resolve in finding a solution jointly with the judiciary.

“And therefore, it is not only in the name of a litigant or people languishing in jails but also in the name of development of the country, its progress that I beseech you to rise to the occasion and realise that it is not enough to criticise. You cannot shift the entire burden on the judiciary,” the Chief Justice of India said in a choking voice.

Addressing the inaugural session of Joint Conference of Chief Ministers and Chief Justices of High Courts, Justice Thakur said that since 1987, when the Law Commission had recommended increase in the number of judges from 10 judges per 10 lakh people to 50, “nothing has moved”.

“Then comes inaction by the government as the increase (in the strength of judges) does not take place,” he said. He added that following the Law Commission’s recommendation, the Supreme Court in 2002 had also supported increasing the strength of judiciary.

A Parliamentary Department Related Standing Committee on Law then headed by Pranab Mukherjee had also recommended taking the judge to people ratio to 50 per 10 lakh from 10.

As of today, the judge to people ratio stands at 15 judges per 10 lakh people which is way less than as compared to the US, Australia, the UK and Canada.

“Those whom we are inviting are also concerned about the ability of the judicial system in the country to deal with cases and disputes that arise out of such investments. Efficacy of the judicial system is so vitally connected with the development,” he said, referring to Modi government’s ‘Make in India’ and ‘Ease of doing business‘ campaigns.http://www.news18.com/news/india/cji-breaks-down-in-front-of-modi-centre-assures-more-judges-1233966.html

Stop Genetically Engineered (GE) Trees Campaign #Enviornment
An Appeal to Chief Justice,Karnataka High Court Mr Vikramjit Sen
In India, a Spectre For Us All, And A Resistance Coming
Hunger Death: Another Birhor Tribal succumbs to starvation