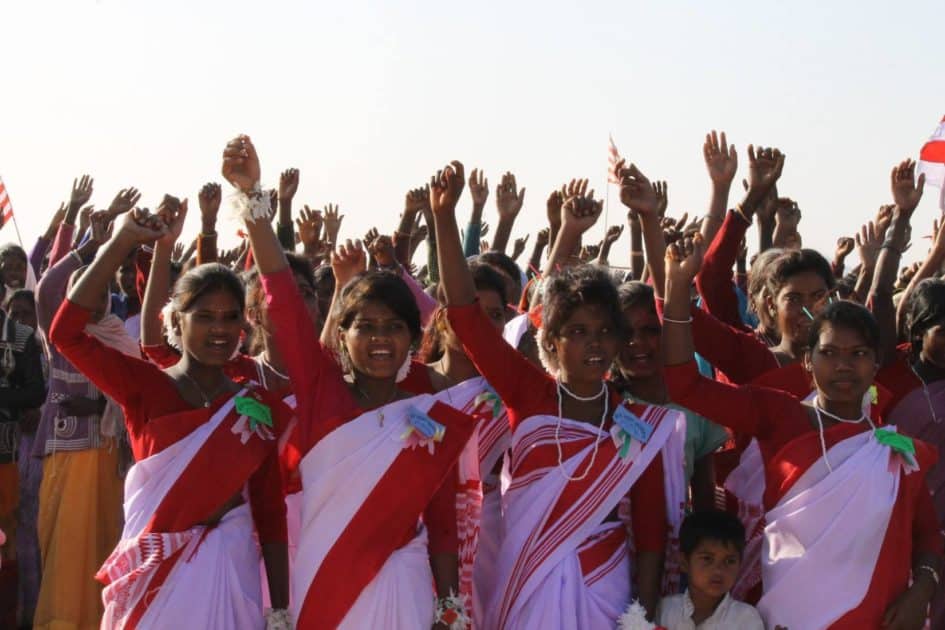 On 18 June 2020, the Indian central government initiated the process for auctioning 41 coal blocks[1] for commercialisation. These coal blocks are located in different states within India and most of them fall under Fifth Schedule areas. The Indian government claims that their decision to auction these coal areas is a big step[2] towards making the country Atmanirbhar Bharat (self-reliant) in the energy sector. The government envisages an investment of 33,000 crore, which would create 2.8 lakh jobs including 70,000 direct and 2,10,000 indirect jobs. Presently, India produces 60.40 million tons of coal per annum (2018-2019), and the new initiates would be adding 15 percent to it.

However, coal auction has opened the flood gate for the private sector, which will suppress the rights of the people mostly the Adivasis, who comprise the indigenous Peoples of India. As of now, the public-sector undertaking companies have monopoly over the coal production in India. The ECL, BCCL, CCL, WCL, SECL and MCL are the major actors, who have played a crucial role in coal mining. But after the auctioning of 41 coal blocks, private entities like Adani, Tata and others will be taking over. These actions of the government’s  has, unsurprisingly, generated  insecurity amongst the Adivasis. Their land and traditional habitations can be acquired at any point of time without their consent. The threat of losing livelihood resources has multiplied in those areas, where the Adivasis have been struggling to protect their forest rights. The case of Rinchi village is one such example to understand the threat of such a coal auction.

After hearing about the proposed auction, Birendra Oraon, village headman of Rinchi village in Latehar district of Jharkhand, is a much worried man. The Adivasis and other traditional forest dwellers of his village may lose nearly 300 acres of forest land, which they have occupied and cultivated for generations. The District Level Committee (DLC) has rejected the claims of 72 Adivasi families, stating that a coal block  will be  in the region.[3] Another 27 claims are also in the process of rejection. Despite the fact that  the villagers have been running from pillar to post, no one is ready to hear their cries for justice.

Rinchi village is situated in the middle of two coal blocks ─ Rajbar and Banhardi. The government has leased out these coal blocks to Cooking Coal Limited and Tenughat Vidhyut Nigam. Both the companies were not able to, thus far,  realize their claims due to resistance of the people. Now, these very same coal blocks are ready to be auctioned to the private companies. If the coal block is opened up for mining, these villagers will lose their land without any compensation, as they do not have entitlement papers of the land. Indeed, the government will claim the land as its property and the villagers will be declared as encroachers of the forest land and they are likely to be forcefully evicted from their livelihood resources.

The struggle of villagers for their forest rights entered a new phase after the Indian government passed the Forest Rights Act in 2006, even though its intention was to right the historic wrongs. They came to know about the FRA from the representatives of Adivasis organisations. 99 families, including 80 Adivasis (ST), 11 other backward communities (OBC) and 8 Scheduled Caste (SC) families of the village filed individual claims in the Gram Sabha (village council). After verification of the claims, the Gram Sabha with its recommendation for recognition of the forest rights, submitted the claims to the Sub-Division Level Committee (SDLC), Latehar. The SDLC after proper verification recommended 72 claims to the DLC, Latehar for recognition of the forest rights and sent back the other 27 claims to the Gram Sabha for re-verification as these claims lacked site maps, evidence or verification from the local authority.

The DLC in its meeting held on 23 April 2015 rejected all 72 claims, giving the coal blocks as the reason. As per the DLC meeting minutes, the Divisional Forest Officer (DFO) informed the DLC in the meeting that the land is proposed for the coal block. After hearing the concern of the DFO, the DLC rejected the FRA claims[4] of the Adivasis. The act of the DLC is a clear violation of section 4(1) and (5) of the FRA. It is clearly mentioned in section 4(5) that no member of a forest dwelling Scheduled Tribe or other traditional forest dweller shall be evicted or removed from forest land under his occupation till the recognition and verification procedure is complete.[5] The DLC has bypassed the recommendations of the SDLC and Gram Sabha.

The DLC rejected the claims of the 72 Adivasis, including that of the village headman Birendra Oraon, who had filed a claim for 4.77 acres of forest land. The SDLC had recommended recognition of his rights, but the DLC rejected it. Similarly, Sunita Devi had claimed her rights over 4.80 acres of land, which the SDLC had recommended, but DLC rejected her claim too. Another villager Mangal Minj had filed a claim for 9.83 acres of land, again recommended by the SDLC, but the DLC rejected it. The DLC clearly misused its power given under the Section 6(6) of FRA, which reads that the decision of the District Level Committee on the record of forest rights shall be final and binding.[6]

Interestingly, the DLC did not inform the Gram Sabha about the rejection of FRA claims. Since the DLC was not informing them about the status of their FRA claims, they decided to file a petition under the Right to Information Act 2005. They were shocked after receiving the information under the RTI. Their claims were rejected. The DLC is the ultimate authority to decide on an FRA claim, so they had no way to appeal against the injustice. However, they decided to protest. They have held a series of meetings and protests, but no one has been ready to hear them.

Interestingly, the DFO, whose prime duty is to protect the forests, is much interested in the coal block. He seems to be ready to allocate the forest land for coal mining but he is against giving rights to the Adivasis on the same land. The DLC rejected the recommendations of the SDLC and Gram Sabha, which clearly shows that the DLC has vested interests. The apprehension is that the coal mafias are behind the rejection of the FRA of the Adivasis. The rejection of FRA for the coal block is a clear violation of FRA section 4(5). In other words, this decision of the Latehar DLC is a continuation to the historic injustice meted out against Adivasis.

Meanwhile, the Gram Sabha actively communicated with the government authorities. After verifying the 27 rejected claims they sent the list back to the SDLC. The SDLC took up the matter in its meeting held on 4th August 2016, and found some lacuna in the claim documents, so the decision was taken to send it back to the Gram Sabha. As per the meeting minutes of the SDLC, Gram Sabha had submitted the claims forms with proper verification. However, the attached document was not attested by the Circle Officer. This is apparently why it was decided to send it back to the Gram Sabha for  the proper verification of documents.[7] After receiving the documents, the Gram Sabha conducted a meeting, and got the signature of the Circle Officer on them and submitted them to the SDLC on 16 March 2017.

However, the villagers were not informed about the status of their claims despite many efforts to extract the information. The villagers apprehend that their claim may also be rejected for the coal block. This is a clear example, which exposes that the State has been primarily batting to serve the corporate interests  by violating the people’s fundamental rights. The biggest threat is that once the 27 remaining claims are rejected, the State may throw out these villagers from the vicinity  in order to  mine  coal.

The auction of 41 coal blocks without consent of the Governors of Fifth Schedule States, Tribe Advisory Councils and Gram Sabhas, is a gross violation of the provisions of the Fifth Schedule of Indian Constitution, PESA Act 1996, Forest Rights Act 2006 and the Supreme Court’s Samata Judgement and Niyamgiri Judgement, which legitimate the role of Gram Sabha in managing the natural resources of a village. However, the Indian State has suppressed its Constitution and laws for benefiting the private coal sectors companies, who play a crucial role during the Indian election by flooding money. Indeed, the State-Corporate nexus has overthrown the rights of Adivasis. There has been onslaught on the Adivasis’ land, territory and natural resources, which needs to be check immediately for the protection of the Adivasis rights.

Bombay, Orissa, Meghalaya high courts to get new chief justices
#India - Legalise unbanked direct blood transfusion (UDBT) - Bloodless ban
We are all canaries in the coal mine #mustread
America enlisted RSS in one of the Biggest Terrorist Organisation in the World