This past week, Uttar Pradesh has been simmering with communal tension across different districts – Mahoba, Kannauj, Pratapgarh. Although the incidents started as minor events, the role of local political groups has only added vitriol to the social environment in the state that is known for recording highest number of communal incidents in recent times. 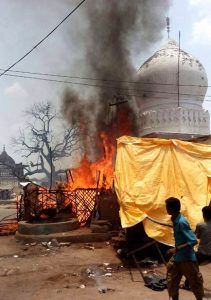 Communal clashes between two groups were reported from Mahoba district in Uttar Pradesh after a calf was found stabbed in the Kulpahad subzi mandi of the district. Following the incident on July 4, an angry mob torched around eight shops in the area that resulted to tension in the region. At least 10 people have been injured. District Magistrate Veereshwar Singh and senior police officials have deployed heavy police force to take control of the situation.

According to police officials, the situation in the region is under control now. Around 150 people have been arrested in the case. While the locals stated that police has been picking up people randomly – even those not involved in rioting – Kulpahad police station in charge Satish Chandra Shukla says the arrests are being made on evidence.

‘The incidences of shops being burnt have been videographed. We are also tracking those who are spreading rumors and fear. Arrests are being made after properly identifying the culprits,’ Shukla said.

Over the last six months, this is the second time that Mahoba has become the centre of communal tension. In January this year, the situation in the district grew tense after a 22-year old woman was allegedly abducted and raped by men from another community. In both the cases, the incidents were fuelled into clashes with the help of political parties. Circle Officer (Charkhari) Dhananjay Kushwaha said Kotwal Razzak Khan has been suspended in the case. Even as Kushwaha assured the situation in the region to be under control, the administration has imposed sec 144 till Eid. Provincial Armed Constabulary (PAC) has also been deployed to keep a close watch on law and order situation in the district.

Uttar Pradesh has been grappling with situations of communal tension as even small incidents continue to become political mileage hotspots for local parties. According to data tracked by Ministry of Home Affairs till 2013, communal incidents in the state increased from 118 in 2012 to 250 in 2013. Over the last two years particularly, western Uttar Pradesh districts such as Shamli, Muzaffarnagar, Meerut, and Saharanpur have been simmering with tension from time to time.

A day after the Mahoba incident, clashes were reported from Kannauj, over 100 kms from the state capital Lucknow. The incident took place on July 5 when a heated argument between a Hindu tenant and a Muslim landlord turned into a fight between groups from both the communities. Stone pelting and shooting was reported from both sides in which 20 people were injured and a man Akeel died from a bullet injury. Fourteen FIRs were registered and PAC personnel have been patrolling the area since the incident. According to sources, several BJP leaders and district in-charge Subrat Pathak had a huge role in inciting the Hindu mob. Interestingly, Pathak, who lost the 2014 Lok Sabha polls to Kannauj MP Dimple Yadav, was also appointed a member in the Indian Council of Agricultural Research by the Modi government earlier in June.

In the same week, violence was also reported from Pratapgarh district’s Gobi Mahuaban village. Heavy police force has been deployed in the region to take control of the situation.

A glimpse into Ram Nath Kovind’s views on discrimination against dalits
In Govt-RSS tango, 5 ministers meet Sangh
India abstains in vote on Palestinian health conditions at World Health Assembly #WTFnews
Can the World Come to Its Senses on Nuclear Weapons?