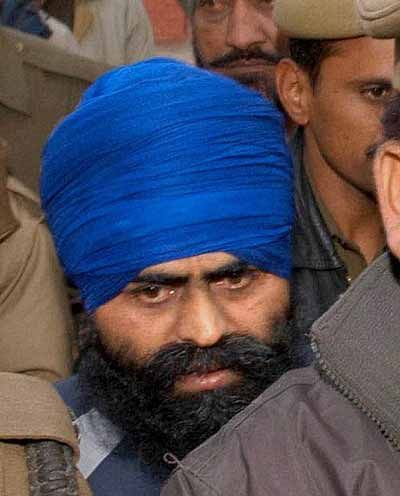 Delhi government has pleaded with the Supreme Court to commute death sentence of Khalistani terrorist Devinderpal Singh Bhullar to life imprisonment on the ground of his mental illness.

In an affidavit filed in the apex court, the government referred to the opinion of the Delhi Lieutenant Governor in which he had favoured commutation of the death sentence.

“On principles of human ethics and natural justice, I cannot bring myself to recommend the rejection of the mercy petition of Navneet Kaur (wife of Bhullar) and my comments may kindly be forwarded to the President of India for the final disposal in the matter,” the Governor had said.

The affidavit was filed in compliance with the order of the apex court which has issued a notice to it on Navneet Kaur’s plea for commutation on January 31 while staying his execution.

The apex court had also directed the Institute of Human Behaviour and Allied Sciences (IHBAS), where Bhullar is being treated, to file a medical report within a week on the condition of the death convict who is alleged to be suffering from a mental illness.

The plea of Bhullar’s wife for commutation of death sentence assumes significance in view of the apex court’s January 21 verdict holding that inordinate and inexplicable delay by government in deciding mercy plea of death row convicts can be a ground for commuting their sentence.

Bhullar’s wife has filed the petition for relook against the apex court verdict which rejected her plea to commute his death sentence to life imprisonment on grounds of delay on the part of the government in deciding his mercy plea.

Bhullar was convicted and awarded death penalty for triggering a bomb blast in New Delhi in September 1993, which killed nine persons and injured 25 others, including the then Youth Congress president M S Bitta.

He had filed a review petition which was also dismissed on December 17, 2002. Bhullar had then moved a curative petition which too had been rejected by the apex court on March 12, 2003.

Bhullar, meanwhile, had filed a mercy petition before the President on January 14, 2003.

The President, after a lapse of over eight years, dismissed his mercy plea on May 14, 2011. Citing the delay, he had again moved the apex court for commutation of the death sentence but his plea was rejected.

The apex court had on January 21 held inordinate delay by government in deciding mercy plea of death row convicts can be a ground for commuting their sentence and granted life to 15 condemned prisoners including four aides of forest brigand Veerappan.

In a landmark judgement, the court had held that prolonging execution of death sentence has a “dehumanising effect” on condemned prisoners who have to face the “agony” of waiting for years under the shadow of death during the pendency of their mercy plea.

Actress Pallavi Joshi walks out of FTII society over Gajendra Chauhan's Appointment
On the frontlines of the war on Naxalism, four women lawyers offer hope to those without any
Villagers oppose uranium mining, proposed nuclear plant at Gogi
Press Release - Attack on the democratic processes in Bastar under the guise of counter insurgency i...