Confessions of an RSS Pracharak’: Why this Book is a #MustRead 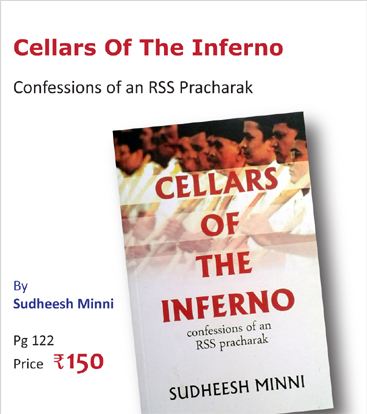 Confessions of an RSS Pracharak

RSS has been critiqued for long for its divisive and fascist ideology. Its role in spreading hatred, communal violence, killings – arson and loot, blasts has been pointed out by critics. However, the attempt of RSS to project itself as a cultural and nationalist organization working for the welfare of majority community, nation and practicing non-violent methods is still believed by many to be the truth. This is despite all the violence that is being instigated in the recent times.

The book by Sudheesh Minni titled ‘Cellars of the Inferno: Confessions of an RSS Pracharak’ breaks any doubts on RSS. Sudheesh was an RSS pracharak, who was inducted to its divisive ideology at a very early age of 5. He participated at different levels – both as a participant in shakhas as well as organizer of shakhas, both at the state level and the national level. He travelled across the country and spent about 25 years of his life with RSS. The initial conviction with RSS ideology later gave way to repentance for the activities carried. The book is a product of his repentance for his role as an RSS pracharak. The book provides an insider view of RSS, its activities, functioning’s, role in divisive activities.
Sudheesh was born in a small village in Kannur district of Kerala. His association with RSS started while he was 5 year old. He used to attend Balagokulam, which used to be organized on weekends. This was targeted at children. The natural curiosity of children to listen to stories of child Krishna was used as a means to instill hatred. Stories around Shivaji and Rana Pratap were also recited to children. Shivaji was depicted as a protector of Hindus from Muslim invasion. The facts of many Muslims being part of military machinery of Shivaji were never depicted. In the manipulated stories with ideological color, wars were never depicted as rivalries between kings for power and territorial expansion but as a war taking place between two different religions. The happenings of those times such as Mumbai bomb blasts were discussed in Balagokulams and were pointed as activities carried out by Muslims against Hindus.

The evening shakhas used to take place for an hour. Apart from yoga, nigooda (traditional war education), marching – what also used to take place was sports activities like kabaddi and khokho. In Kabaddi, children were instructed that on the other side of the line were enemies of the nation – who were Muslims, Christians and Communists. The children were instructed to touch as many enemies as possible during the game. This was followed by songs where they were made to feel proud of their Hindu identity. Inculcating superstitious thinking was common where in one instance it was pointed that a ‘political enemy would die out of snake bite, through god who would come in the form of a snake’.

The prathamik varg shikhak varg course used to be organized for a week during Christmas vacation. It used to be residential and go on for a week. It starts with morning prayers, followed by stick movement, discussions, speeches and evening sports. Each event has a strong anti-Muslim, anti Christian and anti Communist component. The content was primarily from Golwalkar’s ‘Bunch of Thoughts’ and ‘We and our Nationhood defined’. The last day was followed by lighting of lamp and a talk calling out the trainees to shoulder the responsibility of ‘protecting hindus’ who are in danger. With this they were prepared as primary instructors.

RSS has an organized structure. Based on duties, RSS has Khat Pramukh, Mukya Shikhshak, Shikshak, Shaka Karyavaha and Seva Pramukh. At the Mandal level are Mandal karyavaha, Saha karyavaha, Mandal sharirik pramuch, Mandal Boumik pramukh, Mandal Seva pramukh and Mandal sampark pramukh. Apart from this it has Taluk sangh chalak, Zilla pracharak and Zilla vyavastha pramukh. These were based on geography and functions such as sports, social activities and public relations. RSS had no economic agenda. It had its connection with more powerful sections such as large landholders. The concept of land belonging to the tiller was not a principle believed by them. These were seen in incidents where they stood by large landholders and against cultivating landless. This was seen as an arrangement through which they can get some land, monetary and political support for RSS activities.

The creation of rumors was a regular process. Rumors were manufactured to create the image of existence of threat to Hindu religious based activities and the community. An instance of Theyyam festival is pointed out where a rumor was spread of the festival going to be disturbed by the other party. Any suspicion of activities targeted against RSS was acted upon. Sathyan a famous athlete became a victim of such suspicion.

Sudheesh attended his first Sangh shiksha varg in Madurai for 25 days. Daily physical training, stick movement, speeches, discussions and exams were integral. The shibhir stressed that adoption of Christianity, Islam and Communist ideology had caused the destruction of Indian culture. It was emphasized that to protect Bharat Matha from becoming pieces and protecting its culture, they need to fight. The participants are made to draw map of Akhand Bharat which includes China, Afghanistan, Bhutan, Pakistan, Nepal, Bangladesh and Srilanka. It is emphasized that as sevaks, they should rest in peace only after getting back Akhand Bharat. Elimination of three enemies is projected as a way and means to attain Akhand Bharat. In the second Sangh shiksha varg attended by author, the points discussed also included strategies for Hindu revivalism, anti-hindu behavior of Gandhi, critics of hindutva ideology, pilgrimages, old temples, the need to protect hindu temples etc.

The author points that events, which otherwise are not religious have a hidden agenda when undertaken by Pracharaks. He cites his example whereby he tried to reach out to minority institutions to impart vedic maths to Hindu students. Once the students enrolled to the course beyond the school, they were slowly inducted with ideas of a Hindu nation. This happens even in Yoga classes run by pracharaks. Other activities include spiritual activities, yoga, social activities, tuitions, job trainings, coaching institutions for services by Pracharaks. During these events there was subtle introduction to aspects of RSS ideology. He feels that aspects such as vedic maths and yoga can be taught by completely eliminating it of its religious color. The pracharaks operated clandestinely.

The author talks of his experience in organizing the shibirs with children in tribal areas. Ideas of Hindutva were introduced in a primitive community ignoring their identity. An anti-muslim and anti-chrisitan feelings was also propagated among them. This was in a community who never believed in Hindu identity and that by itself was alien.
Referring to his participation in Naipunya varg (secret summit) of RSS at
Nagpur, it also had famous industrialists including Adani attending during inaugural session. To inculcate the idea of Hindutva among sections, separate cells were proposed for Industrialists, Government officials, Hindu priests, Teachers, Doctors, Media and Cultural cell. Each cell was to identify loopholes in identified areas, review once in three months and attack the government in power. Internet was to be used as a means to propagate. The closing ceremony was ended with a speech of retired judge who called for accepting Hindutva as a way of life. It points at the level of penetration of RSS ideology among the elite.

The author observes that RSS owned infrastructure have been reduced to places for corruption, sexual activities and preserving weapons. The need to prepare and buy arms for eliminating enemies is emphasized in Sangh. In the name of fighting back the enemies in Kannur, Karyavahak suggested the usage of Rifles instead of Bombs and swords. The author quotes an instance where he expressed his frustration to another sevak stating that Swayamsevaks are groups which indulge in women harassment, lootings and drinking. All this happens in the name of protecting religion.

Sharing about his visits on RSS mission to Northern parts of the country, he points that Swayamsevaks here also consisted of professionals such as Doctors, Engineers, Scientists, Police officials. Each had a sacred thread. Rich landlords with large landholdings were also part of them. The responsibility for running panchayati or block level shibirs was largely in their hands. Dalits who were landless were exploited. An instance is quoted where a rich landlord (a swayam sevak) was approached by lease farmer requesting for delay in paying due to crop failure. Instead the lease farmer was asked to send his wife and daughters to the landlord. Another instance was seen where demands of a tribal leader to install Ganesh in a temple in a tribal dominant locality was requested from Sangh leaders. This was rejected on the premise that this is reserved only for upper castes. When finally this was installed, the temple was put on fire.
The author points that while sangh mobilizes Dalits for events such as Babri Masjid demolition, the ones who instigated from upper caste continue to be safe. The Dalits who were made to participate became victims. This was equally true of Gujarat.

The Sangh mobilizes about crores of rupees in the name of Guru Dakshina. From within Kerala, about Rs. 250 crores is mobilized. Big industrialists, business persons, contractors, government officials also donate the RSS. A huge amount is mobilized from across the country. This is used for creation of communal incidents, planning terror activities, ending peace and harmony among communities.

The author parts away from RSS to join an alternative. He points that corporatization and communalization have come together and posing threats to the security and democratic values and secular fabric of the nation. Hence he emphasizes on the need for alternative.

The book by Sudheesh Minni is a necessary reading for those who still have an illusion about the RSS and Sangh Parivar. It also provides an anatomy and the way the parivar functions. Most importantly it helps in breaking the myth of RSS being a mere cultural and social organization working for protection of Hindus. It convinces you that more than protecting one, its activities are centered on propagating the idea of eliminating the other. In the idea of building Hindu identity, its attempt in maintaining caste and class based dominance becomes clear. It is a welcome reading for those working to expose the activities of RSS.

Author: T Navin works with an NGO as a Researcher