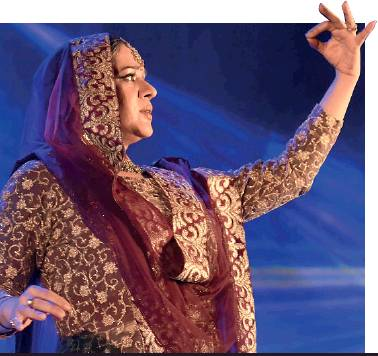 ‘I WAS TOLD ‘ QAWWALI NAHI CHALEGI YAHAN’,ALLEGES DANSEUSE MANJARI CHATURVEDI. IT WAS STOPPED DUE TO TIME CRUNCH, COUNTER ORGANISERS

A cultural evening organised by the Department of Culture, UP, in Lucknow on Wednesday turned into a controversial one when a Kathak performance by noted danseuse Manjari Chaturvedi was stopped midway. Manjari has alleged that the performance was stopped because it was on a qawwali. “I thought it was a technical glitch, but then the next act was announced. It was clear that this was not an error. When I asked the concerned officials, I was told ‘qawwali nahi chalegi yahan’,” she told a news channel. The artiste said that she was allotted 45 minutes for her act as per the plan, yet her performance was stopped. “I have never encountered this before in my twodecade-old career,” she said.

However, the organisers say that her performance was stopped because the event was running behind schedule. The cultural evening was a part of a threeday Indian Region Conference of the 7th Commonwealth Parliamentary Association. On each day of the conference, artistes from the state were invited to perform. On January 16, Manjari Chaturvedi had been invited to perform her dance ballet Rang-E-Ishq, which was to be followed by a dinner attended by Anandiben Patel, the Governor of UP, and Yogi Adityanath, the Chief Minister of UP.

A government official said that since the CM was to arrive and head straight for dinner, the organisers decided to cut short the performances. According to those present at the event, the music was suddenly switched off in the middle of Manjari’s performance and she was told to leave the stage and a Braj dance troupe was invited to perform instead. Jitendra Kumar, Principal Secretary, Tourism and Culture, UP, said, “I wasn’t even there at the event so I have no idea what happened. I have no knowledge of this.”

Talking about the incident, artiste Charu Shankar, who was also supposed to perform with Manjari, wrote on Facebook, “I was to recite some stories of Sufi saints and Coutesan Poets in Manjari Chaturvedi’s Sufi Kathak show in Lucknow. While she was dancing to a Sufi Quwalli song, around 20 mins into the show, suddenly the organisers stopped the music and put off the lights. When she came backstage we were told that this was done “kyunki yahaan quwalli nahin ho sakti” the audience was parliamentary dignitaries of UP, the CM had not yet arrived. We were shocked. Manjariji went on the stage, took took the mike and spoke strongly about this.”

The 5 Ws of journalism are no longer enough
Gujarat local polls: BJP faces rout in rural areas
Indian media has an absolute mania for breaking news: Sir Mark Tully
Asif Iqbal Tanha, Charged With Terrorism, Was A Poor Student Finding His Politics And Voice At Jamia