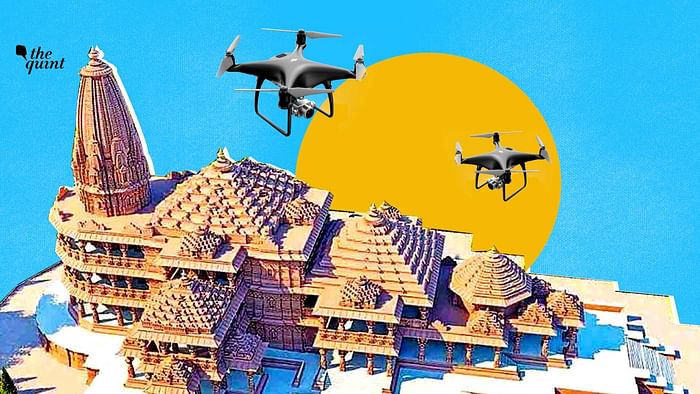 DJI Phantom Drones were used as part of the security, a senior officer of Ayodhya Police told The Quint.SUSHOVAN SIRCARUpdated: 07 Aug 2020, 09:12 PM

At the ‘Ram Temple bhoomi pujan’ held at Ayodhya on 5 August, the police are learnt to have deployed Chinese-manufactured surveillance drones which do not have permission to fly from the DGCA.

DJI system’s Phantom drones were used as part of the security and surveillance arrangements, The Quint has learnt.

Commercial drones manufactured by DJI, a Chinese company which controls over 70 percent of the global market share, do not possess the “No Permission No Take-Off” (NPNT) compliance needed from the Directorate General of Civil Aviaton (DGCA) to operate drones in India.

Currently, as per the DGCA’s Digital Sky portal, 15 models have been recognised. None of DJI’s models, including its Phantom series drones, are on the list.

Apart from the permissibility of the Chinese drones, the legality of aerial surveillance carried out by law enforcement agencies using unmanned systems is also under question.

In the absence of a Personal Data Protection Bill or any guidelines regulating the use of drones by the police, legal experts have highlighted that such surveillance would be deemed illegal.

In a nearly identical case regarding Delhi Police’s use of the same DJI Phantom drones, an RTI query had confirmed in February that it had hired and deployed drones for surveillance during the protests, the state Assembly elections and the communal violence in February.

Drones As Part of a 3-Layer Security

Ayodhya Police DSP Aravind Chaurasia told The Quint on Wednesday evening that the drones were deployed in three different locations across the town – Tedhi Bazar area, Shringaar Haat where Hanuman Garhi is, and Ram Ki Paidi where the Saryu river and ghatsare located.

Police also said the drone monitoring had begun five days prior to the 5 August event.

“We had deployed the drone cameras for multiple security purposes. We were monitoring the road and homes along the VIP route that would be used by the prime minister, surveilling the crowds around the event as well as keep a watch on rooftops of home,” Chaurasia added.

The drones were a part of a three-layer set security set up, explained Nipun Agarwal, ASP, Ayodhya Police.

“We had our drones for aerial surveillance by Ayodhya district police. We also had a team of 28 NSG commandos as well an Anti-Terrorism Squad of Uttar Pradesh Police,” Agarwal said.

The NSG team had been dispatched from Manesar and provided snipers to the security set-up. The ATS team have been stationed in Ayodhya since the Ram Janmabhoomi title suit judgment in November 2019.

“We have trained our men to use drones and they have been operating them on their own. We had procured some drones during the judgment itself and have also deployed them during the anti-CAA protests,” said Agarwal, adding “drones helped us check if people had stored stones on their terraces”.

What the Law Says

Drones or Remotely Piloted Aircraft Systems (RPAS) or Unmanned Aerial Vehicles (UAV) in India are regulated by the Civil Aviation Requirements (CAR) issued by the DGCA in August 2018 and operationalised on 1 December 2018.

The regulation specifies 5 categories of drones classified by weight:

All civilian drones are required by the CAR to obtain a Unique Identification Number (UIN). This applies to both, locally manufactured and imported drones.

No Permission No Take-Off (NPNT)

However, in order to obtain the UIN, the drone must have the ‘No Permission No Take-Off’ compliance in place. The manufacturer shall provide a Certificate of Compliance along with NPNT compliance.

Currently, as per the DGCA’s Digital Sky portal, 15 models have been recognised. None of DJI’s model including its Phantom series drones are on the list. In other words, DJI’s drones are currently not compliant with DGCA’s requirements and lie beyond the permitted categories.

The new Draft Drone Rules, known as ‘The Unmanned Aircraft System Rules, 2020’, have retained the UIN and NPNT provisions of CAR.

Once enacted, these rules will replace the existing CAR which were issued by the Director General of Civil Aviation (“DGCA”) in August 2018.

DJI systems has indicated its unhappiness with the NPT rule in India and in an official blog has stated “India needs to set clear operational guidelines with drones,” as the company feels the rule is outdated and restrictive in nature.

Mitul Arora, India Policy Lead at DJI wrote in blog in November 2019, “NPNT places heavy restrictions on the location, flight path, and time for operating drones, including a color-coded system for how and where drones can fly.”

“Densely populated areas – where drones can do the most good – are likely to be classified as red No-Fly Zones. Most estimate that 50% of the landmass in India will become a No-Fly Zone,” Arora states.

While Ayodhya Police’s drones have been found to be non-compliant with DGCA’s rules, the manner in which they are being used have been viewed as violating the fundamental right to privacy of citizens.

“It is important to consider that the privacy right under the judgment applies even in public spaces and to acts of aerial surveillance,” the Internet Freedom Foundation wrote in a representation to the Union Civil Aviation Ministry on 23 June.

“Such acts of mass surveillance need to be done only on the basis of legality, necessity and proportionality,” IFF’s letter further highlights.

Apar Gupta, executive director at IFF explains, “Such drones are fitted with camera systems to surveil without any clear legal authority, hence violating the fundamental right to privacy as laid down by the Supreme Court in the Justice Puttaswamy judgment.”

Gupta further points out that on 2 May, the Ministry of Civil Aviation had provided a ‘conditional exemption’ to government entities for using drones for aerial surveillance for COVID-19 related activities.

“It is important to remember that the ‘conditional exemption’ was for COVID-19 activities and even then such wide exemptions for surveillance can’t be made,” Gupta said. “The Aircraft Act and Rules have exemptions for the military but no such exemptions are in favour of civilian or public authorities such as police departments,” Gupta added.

Several Exceptions for Police Use of Drones

While Delhi Police has hired and deployed DJI’s Phantom drones since at least the anti-CAA-NRC protests with no action being taken by the aviation regulator, publications like MediaNama have documented similar unauthorised surveillance in several other Indian cities since November 2019.

“Law enforcement agencies have indulged in unabashed drone surveillance, without obtaining a permission from the ministry or the civil aviation regulator,” MediaNama writes in a 15 July report adding, this violation is a “fact which MediaNama has thoroughly documented in its reporting from Delhi, Mumbai, Amritsar, Kerala, and Telangana.”

The use of drones across Indian cities had spiked during the anti-CAA-NRC protests across India between December and March 2019.

“The DJI drones are illegal according to DGCA. But time and time again DGCA has ignored the police using DJI drones,” said Srinivas Kodali, an independent technology researcher.

“People like you should not have sex” – Young people with disabilities claim their right to reproduc...
UPDATE --Mangalore mob attack: Eight arrested for thrashing women inside a resort
An Open Letter to Narendra Modi from Irom Sharmila Chanu
Lebanon in Mourning After Bomb Blasts Kill 43