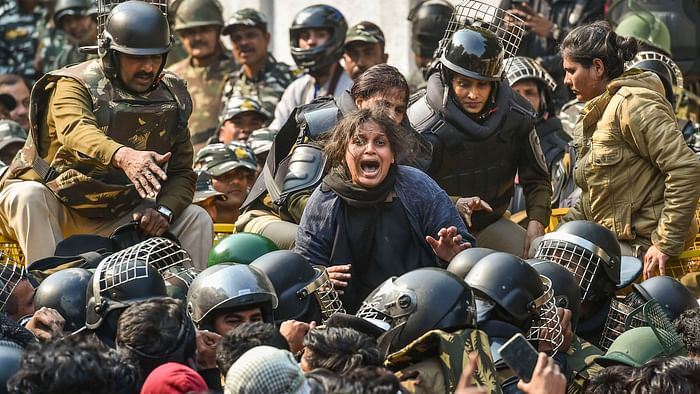 The NFIW report said at least 45 protesters, including 15 men and 30 women, were sexually assaulted by Delhi Police.ASMITA NANDYUpdated: 12 Aug 2020,

At least 45 people – including 30 women and 15 men – were sexually assaulted by Delhi Police during a clash with anti-Citizenship Amendment Act (CAA) protesters in Jamia Nagar on 10 February, a report by the National Federation of Indian Women (NFIW) has stated.

The report further highlights that there was “targeted sexual violence on women”.

NFIW, currently led by activist Aruna Roy, is a 66-year-old organisation working for women’s rights. The report was compiled by the organisation based on accounts and testimonies of survivors, medical staff, activists, legal professionals and other stakeholders.

As per the report, not just women, men, too, alleged that they were attacked in their private parts during the face-off.

The report, released on Tuesday, 11 August, states that around 70-80 persons have suffered violence, in an age range of 15-60 years.

“Those who suffered grievous injuries include 30-35 men and 15-17 women,” it adds.Also ReadJamia Violence: Students Who Were Beaten Question NHRC Report

What Happened on 10 February?

On 10 February, amid the ongoing protests against the CAA, the students of Jamia Millia Islamia had planned a march with banners and placards to the Parliament House.

“By 6 pm, the crowd swelled, as many local residents and supporters joined the protest. The police began to put up barricades to stop the protestors from moving forward,” according to the report.

Soon, the protest turned violent with the police springing into action and using force to disperse the crowd. Jamia Millia Islamia had also witnessed extreme violence and police action on 15 December 2019 during an anti-CAA protest.

Dr Abdul Nazar, director of Al-Shifa Hospital, had told The Indian Express on 10 February, “While most of those injured complained they were kicked in their stomach, one woman complained of injury to her private parts.”

According to the NFIW report, relatives of several men (students and protesters) who were picked up and taken to the nearby police station, too, have alleged that they were constantly beaten and kicked in their groins inside the bus.

The report notes, “As we could not get access to the MLCs, we have to rely on information given to us by the survivors themselves. Here we were helped by the medical students who tried to explain the statements given by survivors. We would like to reiterate that our report is based on testimonies given to us by survivors, their spokespersons, medical practitioners, legal and medical advisors.”

What Reporters Saw at Protest Site?

Reporters who were on ground on 10 February recalled that while they did not see police using batons on protesters, those in first-line were beaten with lathis.

The NFIW report also says that after talking to survivors and protesters present at the spot, it was “evident” that there was used of a chemical gas.

Quoting eyewitnesses, the report said, “At about 6:30 pm, a misty air was visible from a distance. On reaching closer they discovered that an odourless spray was being used on the protesters.”

“During our investigations, we also discovered that the complaints of choking, vomiting and limited mobility continued for over a week after the attack. Patients were checking in with symptoms of palpitations, muscle atrophy and spasms at different medical centres and hospitals in the vicinity.”

The police had earlier categorically denied the use of any chemical spray or torture techniques on students. A Reuters journalist, who was at the spot, had also said that he did not experience any chemical substance in the air.