Coronavirus: India’s lockdowns are a matter of life and death for its 450 million informal workers 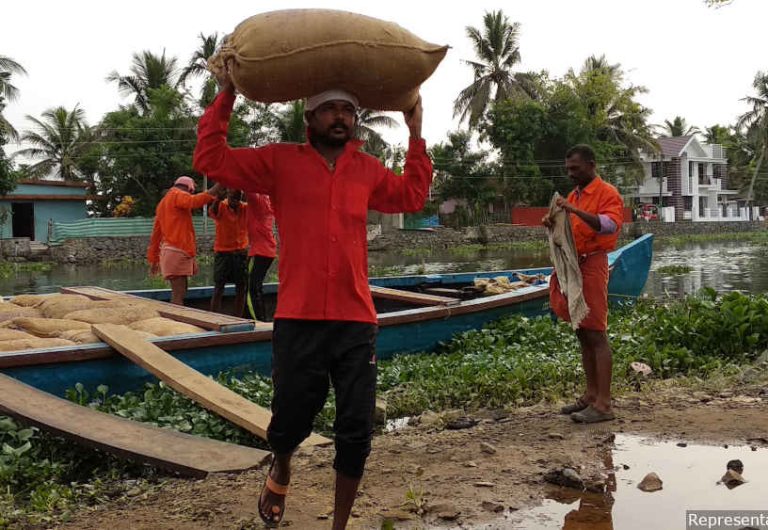 Ajmal Khan (right) at work before he lost his job when the Indian government announced a lockdown to curb the spread of the coronavirus. Photo: Adnan BhatFive minutes after the end of Prime Minister Narendra Modi’s one-day “Janata Curfew”, or “people’s curfew”, New Delhi autorickshaw driver Pappu Yadav stepped out in search of a few passengers and a few rupees. He only had the night – on Monday morning, India’s capital city went into complete lockdown as the country scrambled to halt the spread of the deadly coronavirus among its 1.33 billion people.

Yadav usually earns around US$10 a day, but he had already seen a sudden dip in income over the past few weeks as many Indians began practising social distancing and working from home. He now faces the prospect of at least a week without earning any money.

“I send money to my wife and kids back home every week. Last week, I sent less than usual. This week, I have asked them to borrow from one of our neighbours. I’m not sure how to run things beyond that,” Yadav said.

The 35-year-old shares a small room with three other migrant workers on the outskirts of Delhi, while his family lives in their native village in Bihar – some 1,000 kilometres to the east.

As the number of Covid-19 cases in India surged to 492, including 10 deaths, the Modi administration has announced lockdowns and transport restrictions in more than 80 states and districts until March 31, with some state governments issuing similar curbs. The authorities have warned that those violating these restrictions could face up to six months in jail.

But Yadav and India’s estimated 450 million other informal workers are facing a quandary that underlines how social inequality threatens to undermine virus containment efforts around the world. The informal sector makes up some 90 per cent of India’s total workforce and contributes about half of its GDP, but has no income security or health insurance and only limited access to health care.

From migrant workers to street vendors and contract workers, thousands of people working in the sector do not have the option to work from home or take time off to practise social distancing. On Saturday, New Delhi and Mumbai saw overcrowded railway stations and bus stops as people who had been laid off or were simply unable to find work were forced to return to their native villages, putting them at risk of infection.

Indian officials on Tuesday said the coronavirus was spreading out of big cities and into small towns across the country, with some pointing out that India’s rural areas are poorly equipped to handle the outbreak.

Those who decided to stay in the hope of continuing to make a living now have nowhere to turn. On Saturday, Ajmal Khan, a construction worker from Uttar Pradesh, was asked not to come to work the next day. The 54-year-old, who had been living at a construction site in Noida city, was also ordered to vacate the premises.

“A friend from my village who is staying in Noida has given me space for now. But I can’t live here for long. There are five people already living here and I have no money to spend,” he said over the phone.

Jyoti, a domestic worker in Delhi, makes around US$100 a month. She lives in a rented two-room flat with another family in a slum on the edge of a posh South Delhi suburb.

“We understand what the government is doing is for our own benefit. I don’t want to get sick,” she said. “But the government should have made some arrangements before making such an announcement. Or at least given us time to prepare.”

While their cramped living conditions mean social distancing is almost impossible for Jyoti and her family to practise even if she does not go to work, the slum – which houses over 500 families – does not even have a water supply for people to regularly wash their hands

Jayati Ghosh, a professor of development and international economics at the Jawaharlal Nehru University in New Delhi, believes the sudden lockdown could see the onset of an economic crisis if the government does not take the necessary steps in time.

“The effects have already begun to show on the people working in unorganised sector believes. Thousands have lost their jobs,” she said. “We are faced with people who have a hand-to-mouth existence with no savings and no ability to tide things over for a month or two. People can die of hunger before they catch the virus.”

Some state governments have announced measures to assuage the public’s fears. The southern state of Kerala has announced US$2.7 billion in aid, while in Uttar Pradesh will provide cash transfers of 1,000 rupees ($13.50) per month to more than 3.5 million day labourers and construction workers.

Delhi’s Chief Minister Arvind Kejriwal also announced measures to alleviate financial stress for the poor, including up to 5,000 rupees pension to be paid to 850,000 beneficiaries by April 7, and larger rations for those entitled to food subsidies. However, some experts feel these measures may not turn out to be enough.

The state and the central government will have to work together on this, said Purnima Menon, a senior research fellow with the International Food Policy Research Institute in New Delhi.

“These are social protection measures. But the government needs to think from a short-term, medium-term and long-term perspective,” said Menon, who is also worried about the implementation of such schemes and their impact on the ground.

“It’s one thing for the government to announce these schemes. We already know in India there are significant governance challenges even around implementation of basic social schemes. And in these tough times, these challenges will be further amplified.”

How sex toys are being redesigned to help survivors of sexual assault #Vaw
A Watery Death: Haunting Visit To A 'Ghost' Village
Is Aadhaar a platform for cyberlaundering subsidies, benefits and services?
#India - 1 woman dies for every 1,000 sterilisation surgeries in Tamil Nadu #Vaw #healthcare