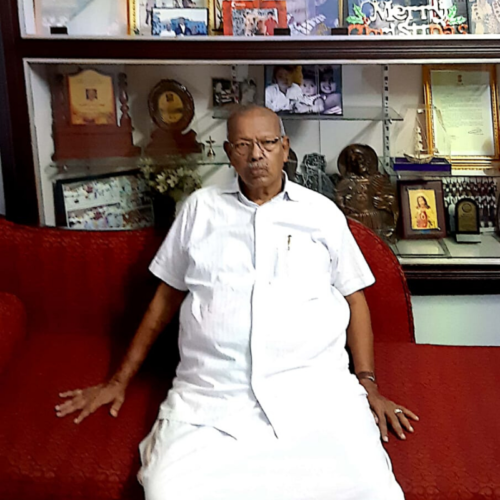 “I’ve been a trader here in Kozhikode for almost 57 years. At times like this we have to stop thinking about profits and simply stand with humanity.”

C E Chakunny from Kozhikode has taken on many careers in his lifetime.

Being a hardcore fan of cinema, Chakunny has enacted a range of side roles including that of a chief minister, an MLA and an opposition leader in many Malayalam movies.

But for the people of Kerala, Chakunny is not popular for the movies he’s acted in but the good deeds he’s done.

When the confirmed cases of COVID-19 shot up rapidly in Kerala, many shopkeepers experienced a severe loss in their sales.

Chakunny, who leases out more than a 100 buildings across Kozhikode to different shop owners realised that many of them were unable to pay the rent on time. So he exempted them from paying the rent for a month.

“I know the pain a person owning a business goes through during such trying times. I was in the same position a few years back and I realised that it was time for me to do whatever I can to help,” he explains.

After finishing his SSLC from his hometown in Chalisseri, Palakkad, Chakunny joined as a trainee at Vijaya Traders in Kozhikode.

After picking up the basics, he started ‘Chakunny and Company’ in 1968.

“I started off as a salesman and slowly started off my own business, so I’ve gone through my own share of struggles in the business world. So I couldn’t bear to see these shopkeepers go through such a great loss.” he explains.

“A few days back some of my tenants requested if they could pay the rent on a daily basis rather than paying at the end of the month. I was fine with that. But a few days later, when my son went to collect the rent, he said that some of the tenants couldn’t pay the rent at all. I went and spoke to them personally and understood that they were experiencing a serious dip in the sales.” says Chakkuny.

“When I went to see them in the evening one of my tenants told me that he had only one customer come in throughout the day. I realised that many of them had been taking loans to pay the rent till then. They were struggling to pay even their own employees.” he adds.

Chakunny immediately consulted his auditor and other family members who had ownership over these buildings and exempted a rent of Rs 12 lakhs which he gets from over 100 buildings in key areas in Kozhikode.

From voicing the grievances of air passengers to bringing out the concerns of NRI Malayalis, Chakunny has fought for many causes for the society and is currently an active member of various organisations including Malabar Chamber of Commerce, Calicut Chamber of Commerce, All Kerala Consumer Goods Distributors’ Association, World Malayali Council and Malabar Rail Users Association (MRUA).

“I’ve been a trader here in Kozhikode for almost 57 years and what I’ve learnt is that at times like this we have to stop thinking about profits and losses and simply stand with humanity. If there’s something within your capacity to contribute, you must do it,” he concludes.