Covid-19 to ‘push out’ 20% children from schools, universalisation a distant dream 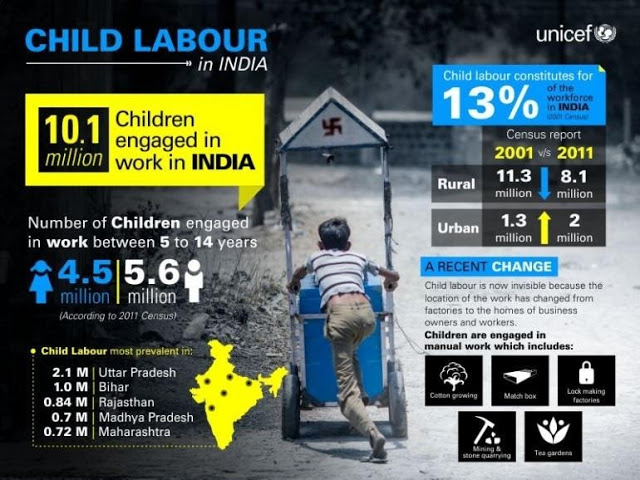 According to The Right to Education (RTE) Forum,on the occasion of the World Day Against Child Labour (June 12) has estimated that up to 20% children, are likely to be “pushed out” from the education system resulting in a huge school drop out because of the Covid-19 pandemic crisis, leaving “the goal of universalisation of education a distant dream.”

Signed by Ambarish Rai, national convenor, RTE Forum, which claims to network 10,000 organisations and working in 20 states for the implementation of the RTE Act, the statement says that this year’s World Day Against Child Labour was “celebrated” in an unprecedented circumstances in India, which has witnessed “probably the worst phase with thousands of migrant workers and others going back to their natives due to loss of their livelihood and absence of any sustainable resources in the wake of lockdown.”

“The children, particularly from marginalized and disadvantaged sections, including children with disabilities, girls and first generation learners are the worst sufferers. Long-term consequences like increase in child labour, trafficking and child marriage are feared as a result of the loss of access to education and disassociation with schools”, the statement says.
“Dr Ambedkar had said long ago that the right place for our children is school and not workplaces. But the present educational scenario and large figures of child labour shows a gloomy picture altogether. In a report on child labour in India, International Labour Organisation (ILO), has said that nearly 4 per cent of India’s child population (5-14 years) is working as child labour (either main worker or marginal worker)”, Rai says.

He adds, “According to ILO, there are about 152 million children engaged in child labour worldwide while in India, according to 2011 census data, 10.1 million children of 5-14 years age group (4.5 million girls and 5.6 million boys) are working as child labour. Further, 2011 census data says 8.4 crore children are out of school.”
The statement further says that the situation even before this pandemic was never good, but now, with the Covid-19 pandemic scenario, “the condition has worsened while we are on the verge of a definite and great economic recession.” It adds, “Certainly, these children are now going to face more difficult circumstances affecting their health, nutrition and education.”

Children between 15-18 years engaged in hazardous work account for 62.8% of the India’s child labour workforce

As for efforts to abolish child labour, Rai says, “No concrete measures were taken to end this evil. The Child Labour (Prohibition and Regulation) Amendment Act, 2016, passed in 2016 prohibiting the engagement of adolescent children in hazardous occupations and processes, is weakened enough by amending the list occupations considered hazardous from 83 to 3 (mining, explosives, and occupations mentioned in the Factory Act) and giving acceptance to work in family enterprises and entertainment industry.”

“Astonishingly”, he regrets, “Data show children between 15-18 years engaged in hazardous work account for 62.8% of the India’s child labour workforce”, underlining, “Engagement in any type of work is depriving these millions of the children not only from their right to education and health but also their right to play, access to leisure and basic freedom for a dignified life. The government should make a concrete roadmap to protect the lives of millions of the children ensuring their rights to life, health and education and to ensure eradication of child labour till 18 years.”
Meanwhile, the RTE Forum has suggested several immediate steps, including “sensitive and empathetic support” to the affected children with greater vigilance and stringent action against the violators of child labour laws; immediate admission/linkage of children of migrant workers in the nearest schools; and instructions to schools to track all enrolled children, especially girls, once normalcy returns to ensure that no child drops out.
At the same time, “steps should be taken for child protection, including identification of children at risk of violence and abuse during the lockdown. Helplines and other child protection measures should be declared essential services and kept open. Child protection committees at district and block levels should be activated to monitor child protection.”
Also, there should be “educational support” to all children so that children continue to learn and build resilience to cope with the current situation” , which would also “address the risks of children falling prey to child labour, trafficking, child marriage and large-scale drop-out from school.”