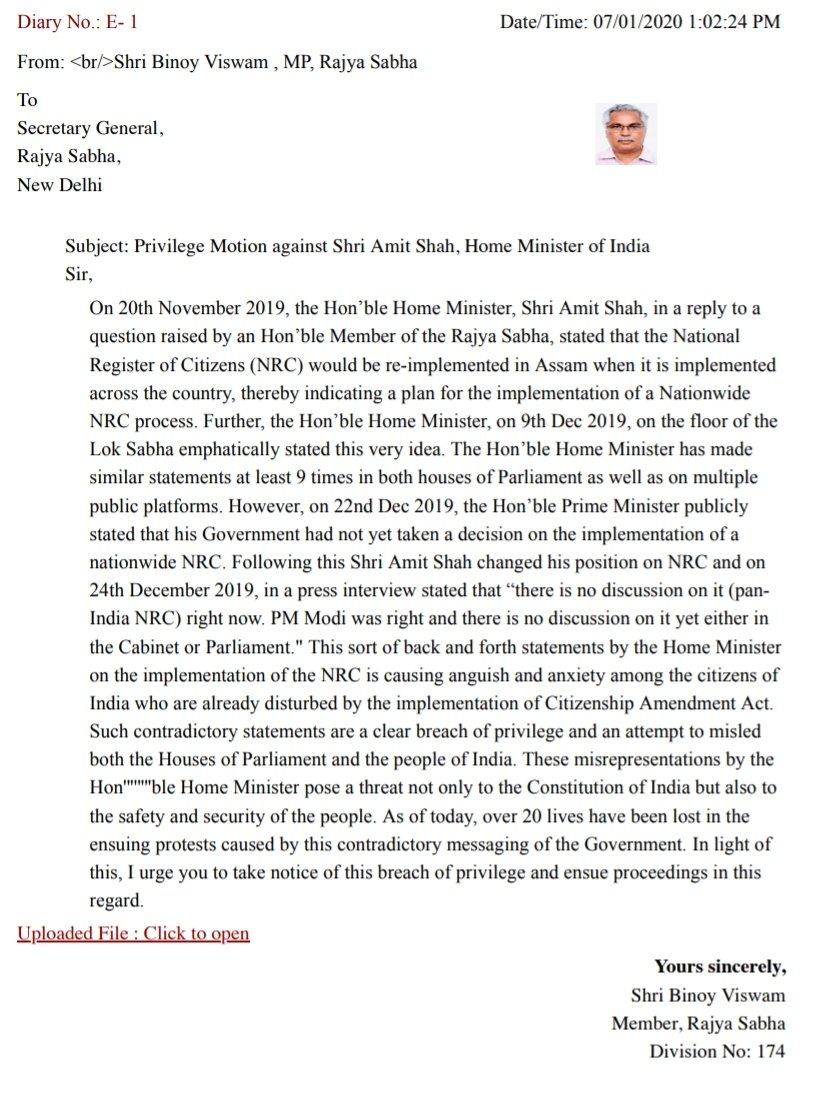 New Delhi, Jan 7 CPI MP Binoy Viswam has given to the Rajya Sabha a notice for alleged breach of privilege by Home Minister Amit Shah, accusing him of misleading the House by making contradictory statements on the creation of an NRC, causing ‘anguish and anxiety’ among people.

Listing instances of Shah allegedly stating that the scheme of a National Register of Citizens (NRC) would be implemented countrywide and then going back on it, Viswam, in a letter to the Rajya Sabha secretary general, has said such statements were a breach of privilege.

In his letter, he said Shah, in a reply to a question in the Upper House on November 20, 2019, had stated that the NRC would be re-implemented in Assam when it is implemented across the country, ‘thereby indicating a plan for the implementation of a nationwide NRC process’.

Shah repeated this on the floor of the Lok Sabha on December 9, 2019, Viswam added.

The Left leader alleged Shah made similar statements at least nine times in both houses of Parliament as well as on several public platforms.

In an interview on December 24, Shah, however, backtracked on his earlier statements after Prime Minister Narendra Modi said on December 22, 2019 that the government has not yet taken any decision on the implementation of a nationwide NRC, alleged Viswam.

‘Such contradictory statements are a clear breach of privilege and an attempt to mislead both Houses of the Parliament and the people of India.

‘These misrepresentations by the home minister pose a threat not only to the Constitution of India but also to the safety and security of the people,’ he said, urging tghe rajya sabha secretary general to take notice of this breach of privilege and begin proceedings in this regard.

#India - A Male Gang Rape Survivor speaks out #Gender #Sexuality #mustread
Please release my mother, Sudha Bharadwaj'
For the rich, India is as good as a tax haven
Battle over Narmada River - Gujarat Vs Madhya Pradesh - who suffers ?