Kolkata/Basirhat: When Sakina Khatun (28), an Indian power lifter was participating in the women’s lightweight (up to 61 kg) category in Power lifting at 20th Commonwealth Games in Glasgow, Scotland, besides the weight, the hope and aspirations of her family and village was also on her shoulders. And she did not disappoint them as she won the Bronze medal for the country.

Sakina is a real champion who embattled polio and poverty to participate in the CWG. Earlier this year she had disappointed in the IPC World Championships in Dubai, but that did not deter her and she remained focused. Sakina took part in women Lightweight division in power lifting and lifted a total weight of 88.2 kg to finish at third position. 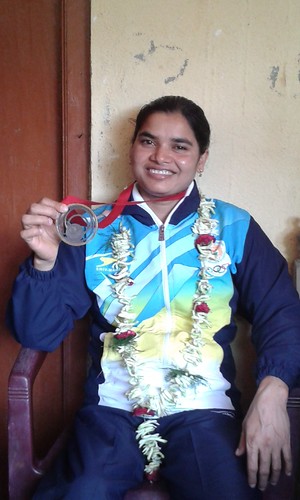 Sakina Khatun Indian Bronze winner in CWG shows her medal in her village
Sakina hails from village Korapara, under the Basirhat police station of North 24 Parganas district, about 80 Km from Kolkata. Her father Sirajul Gazi was a daily wage laborer, but due to old age he cannot work anymore. She has one brother Nur Islam Gazi, who works in a local tailoring shop and is the bread earner in the family. Her mother Noorjahan Begum works as maid-servant in the locality to support the family income. Although Sakina is still single, her elder sister Sufia Khatun and Younger sister Jahanara Khatun are already married.

Although effects of polio remained, Sakina was athletic from childhood and liked swimming and other sports. She practiced swimming in the local club and participated in special category in several tournaments as well. 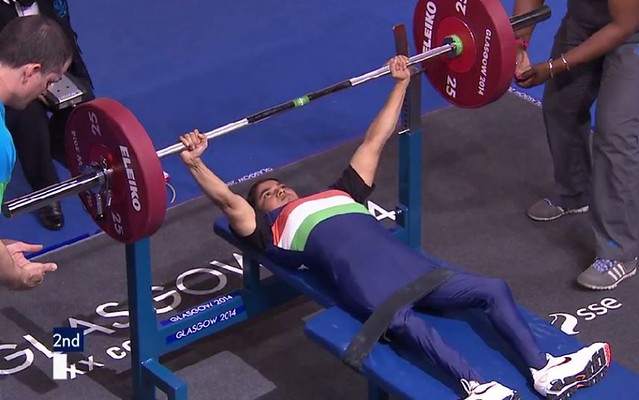 Sakina Khatun performing lightweight Women Power lifting in Commonwealth Games 2014, Glasgow, Scotland that won Bronze for India
Seeing the enthusiasm of the young girl a local Karapara Football Coaching Centre came forward to help her and arranged for a sponsor to bear the cost of her operation in leg, after which she gained some strength.

Sakina told TCN that football referee of Karapara Football Coaching Centre, Kalidas Majumder took her to local social worker and businessman Dilip Majumder, who agreed to help her. Majumdar helped her admitted in a swimming club at College Square in Kolkata.

It was at this club that coaches recognized her talent of powerlifting and suggested she should take this up seriously. But as the facilities for power lifting was not available in the state capital, it was Majumdar again who helped her getting training in Punjab and later in Bengaluru, where she has been for most of her last three years. He put her in Bengaluru under the guidance of Farman Basha, well known power lifter who finished 5th at the World Championship in Dubai earlier in the year but withdrew from the CWG with an injury after receiving three red flags for his first attempt at 145 kg. 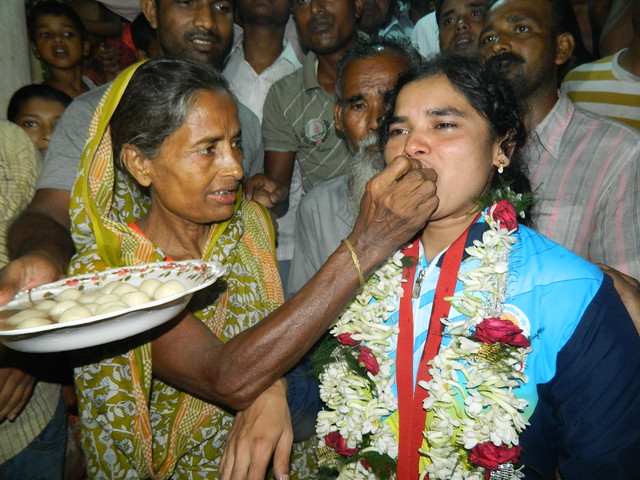 Sakina Khatun with her mother after returning home .
Her mother Noorjahan Bibi does not even know what game or which country she went to participate in the game, but is thankful to God. “I do not know which country she went, but I know she won the bronze,” she told TCN in Bengali, adding, “We are a poor family, have nothing at home, this is a gift from Almighty Allah. He has given us this reward.”

Talking about family Noorjahan also said that among her four children, Sakina is the only one who could pass secondary examinations. She also informed that at the age of two Sakina was attacked with polio and was under treatment in a government hospital in Kolkata for years. After about two years of her treatment, when she returned to the village, she was admitted to a local madrassa. 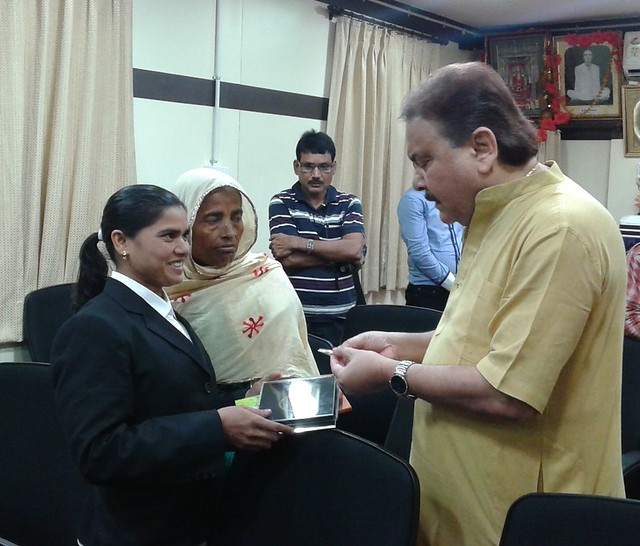 Sakina Khatun and her mother Noorjahan Bibi meeting Madan Mitra, Sports Minister of West Bengal on 7th August, 2014
Sakina’s borther Nur Islam and Father Sirajul Gazi both sounded ignorant of the game the proud daughter of the family plays, but expressed their gratitude for her Godfather and local sponsor Dilip Majumder and coach Farman Basha.

As Sakina won the medal, local media persons frequented her house and the proud family happily displayed all the medals and trophies she had won.

Dilip Majumder told TCN over telephone that, Sakina is like her daughter and he is happy that she has made not only him, but the country proud. He also informed that besides bronze, Sakina has earlier been national women power lifting champion on two occasions and came fourth in Hungary and Dubai early this year. 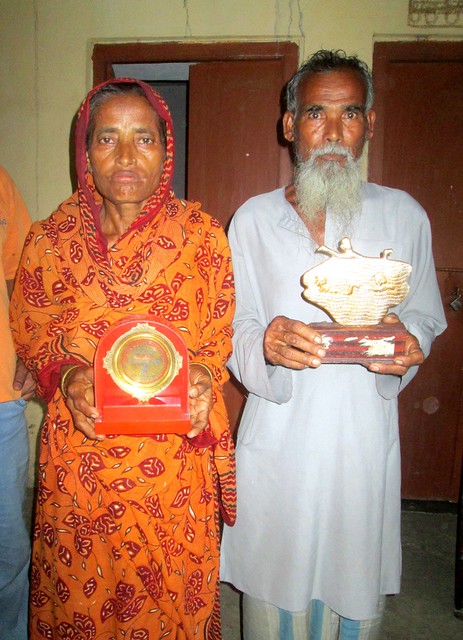 Sakina Khatun’s mother Noorjahan Bibi and father Sirajul Gazi showing her medals.
Sakina took three months training at SAI campus in Ahmedabad before the CWG that helped her win the medal, he informed.

Her mother Noorjahan also told TCN that although they get no direct benefits from the state or central government, their earlier kachcha house was converted into concrete under the Gitanjali project. She is now hopeful that Sakina get some government job.

Her wish was granted on August 7, when Sakina Khatun along with her mother Noorjahan Bibi met Madan Mitra, Sports Minister of West Bengal. Mitra assured Sakina that the state government will give her a grant of Rs one lakh, and if she wins another medal in the coming Asian Games, the government will give another 5 lakhs. He also assured her that he try to arrange a meeting with the WB CM. 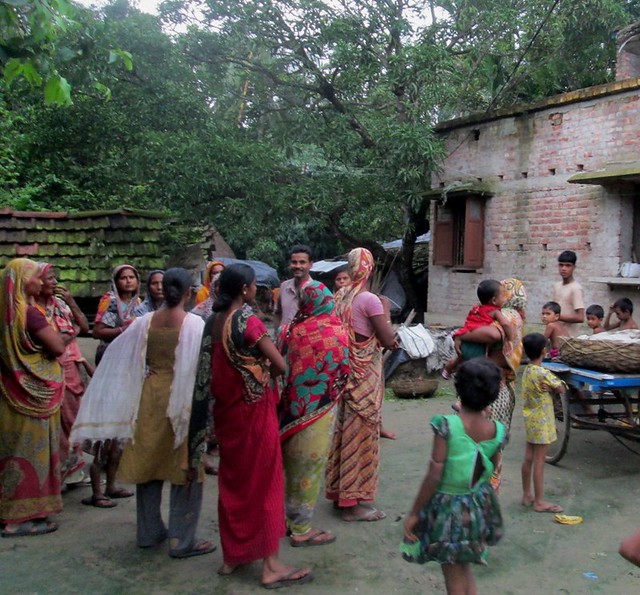 Korapara Villagers waiting for Sakina to welcome on her return.
She said that soon she will leave for Bengaluru to prepare for the coming Asian Games, and she now hopes that the government comes forward to help her financially by offering her a decent government job under sports category.

A religious person, Sakina says that this is an Eid gift from God. Sakina was in Glasgow during Eid. While expressing deep gratitude for her Sponsor Dilip Majumder, Sakina is hoping that some organization will come forward to help her as she does not want to remain a burden on him.