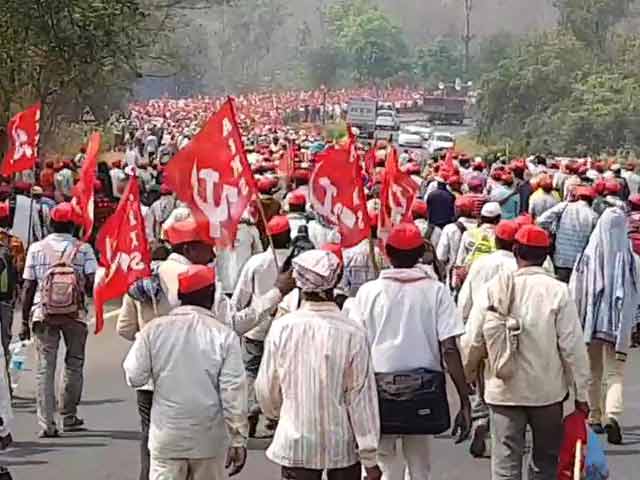 MUMBAI: The 1.5 kilometres from Sagar Naka to to Paar Naka in Dahanu was a river of red on Thursday last week. The forceful acquisition of land for Prime Minister Narendra Modi’s pet bullet train project had brought more than 50,000 farmers and villagers of Palghar district on to the roads to protest this action of the government.

The farmers, rallied under the banner of the All India Kisan Sabha( AIKS) to prevent the government for acquiring over 1000 acres of fertile agricultural land for the Mumbai-Ahmedabad high speed rail corridor(MAHSRC) and Mumabi-Vadora Expressway .

The MAHSRC r bullet train project being rushed into by both the Maharashtra and Gujarat governments is centred around a rail corridor that will originate from Bandra Kurla complex in Mumbai, pass through Thane and Palghar districts of Maharashtra and terminate at Sabarmati in Gujrat.

On April 9, farmers of Gujrat had gathered in Vadodara where the stakeholders meeting had taken place to protest against the project that will leave them without their land.

According to the National High-Speed Rail Corporation, construction of the bullet train project will acquire more than 850 hectares of land in Gujarat, Maharashtra at the cost of local farmers’s livelihood.

On Wednesday, MAHSR officials visited Dahanu Village in Palghar district to conduct a survey for the bullet train route but the residents were not informed. The farmers said that the government had deliberately kept them in the dark. When the news about the survey spread there was a spontaneous protest with the farmers shouting slogans against the government and the officials undertaking the survey.

AIKS leader Ashok Dhawale told The Citizen “ Earlier, we had depended on the government’s oral assurance ato us on this issue but later we asked them to give it in writing which the state government of Maharashtra did. The document meeting our demands was signed by the Chief Secretary of Maharashtra and the Chief Minister himself agreed to table it in the State Assembly and yet they are now trying to acquire this agricultural land that will displace the farmers from their homes. It is a complete act of betrayal by the state government.”

So now what? Dhawale was categorical “If they do not listen to us, we will silently drive them out of the place.” He said that it was understandable that government projects had to be undertaken and executed and that he and his organisation were not against development. But this should not compromise the needs and rights of the farmers. “Never at the cost of the farmers”, he said firmly.

The protest came just a month after the All India Kisan Sabha’s long march from Nashik to Mumbai. More than 50,000 farmers had marched overnight to camp in Mumbai until their demands were conceded. A panicky state government met the farmers delegation and gave a written assurance that the farmers demands on bad loans, compensation, land rights would be met.

AIKS Joint Secretary Vijoo Krishnan who is a key figure in the mobilisation of agitated farmers across the country told The Citizen, “This is an uprising of the agrarian sector and it has been happening for the last two years. It is happening in many parts of the country such as Rajasthan, Karnataka and Madhya Pradesh apart from Maharashtra. There were various kinds of agitations prior to this and now we have an active participation of about 50,000 farmers. This is a protest for the farmer’s livelihood and since the BJP government has breached their faith, it has taken a political colour. Our agitations are not confined to BJP ruled states but also in Karnataka, the Congress-ruled state.”

Agrarian expert P. Sainath said in the New York Times, “Cultivation costs have risen manifold since the mid-1990s but the farmers incomes have stagnated or declined. Seeds, fertilizers, and pesticides are firmly in the hands of corporations.” He added, “Public-sector banks have turned away from small and marginal farmers since the late 1990s.”