New Delhi: FORWARD Press, a magazine devoted to dalit issues, has alleged that the Delhi police went on rampage and vandalism at its Nehru Place office on October 9 and allegedly detained four staff members.

“After vandalising our office and detaining our staff, now Delhi police is confiscating copies of our magazine from stalls across the city without any orders of any court or any competent authority,” Pramod Ranjan, consulting editor of FORWARD Press, said in a release here on Friday. 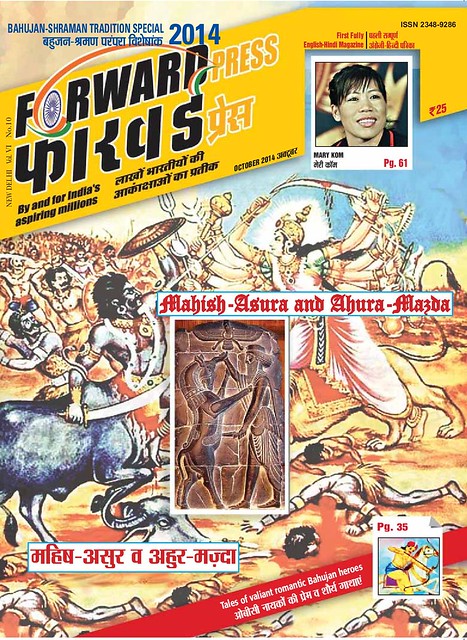 He alleged that this action was “being taken at the instance of fundamentalist forces,” which is not only a blatant violation of Freedom of Expression granted by the Constitution but also an attempt to stifle any logical-intellectual disclosure.

As per the release, two groups of students had clashed on Thursday at the Jawaharlal Nehru University (JNU) campus over the observance of ‘Mahishasur Martyrdom Day’. Earlier, the police had raided the office of FORWARD Press on the basis of a complaint lodged at the Vasant Kunj police station. In the complaint, it has been claimed that FORWARD Press had published objectionable material about Goddess Durga, on the basis of which students of the JNU were organising ‘Mahishasur Martyrdom Day’.

Ranjan clarified that “The October 2014 issue of FORWARD Press was a special number devoted to ‘Bahujan-Shraman tradition’ and carries well-researched articles of leading writers and professors of prestigious universities. The Bahujan rendition of the story of ‘Mahishasur and Durga’ has been presented in words and through sketches and paintings.”

“There is absolutely nothing in the issue that can be described as objectionable under the Indian Constitution. Our objective was not to humiliate or hurt the sentiments of any community or group. We are only trying to identify and rejuvenate the symbols of Bahujan culture and civilization. Anyway, Bahujan renditions of popular texts have a long tradition, starting from Jotiba Phule and going up to Ambedkar and Periyar,” he added.

While condemning this attack on freedom of expression, Ranjan said, “We want to state that the action has been taken at the behest of the Brahamanical forces in the BJP. FORWARD Press – a magazine of Dalits, OBCs and Tribals – has always been an eyesore for these forces. In the last couple of years, FORWARD Press has faced many attacks from these forces. The attacks have only strengthened our moral force. We are hopeful that we will be able to emerge with our head held high from this latest crisis too.”

Later, both the Editor-in-Chief and Consulting Editor of the magazine went underground.