Prakash Ambedkar on Monday issued an ultimatum to the Devendra Fadnavis government that controversial right-wing leader Sambhaji Bhide should be arrested for the Koregaon Bhima violence within a week, as hundreds of Dalits marched in south Mumbai and thousands protested at Azad Maidan.

The march, which began from Byculla zoo and ended at Azad Maidan, and the police’s security measures affected traffic for over two hours and many schoolchildren were seen walking on the road as their buses remained stuck in gridlock. Students who live in societies near Lalbaug flyover had to walk up to 4 km to reach their schools in Byculla.

The main protest, Elgar Morcha, took place at Azad Maidan. While the police said around 15,000 protesters assembled there, the organisers claimed the figure was around 40,000.

Addressing the rally, Ambedkar, who heads the Bharipa Bahujan Mahasangh, claimed the government was treating Bhide like its sonin-law and dragged Narendra Modi into the row by alleging the prime minister was shielding him. 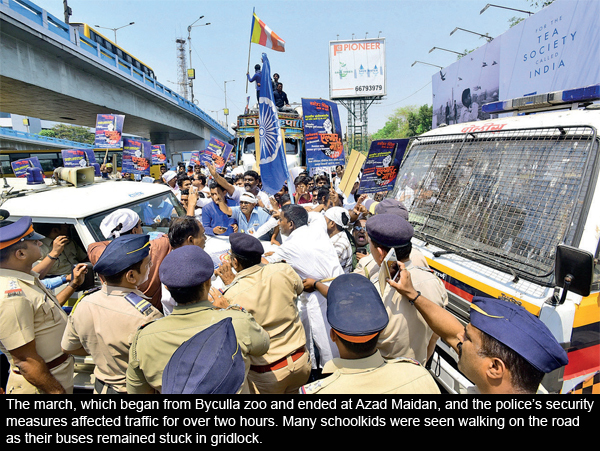 Bhide and Milind Ekbote, leaders of right-wing outfits Shri Shiv Pratishthan and Hindu Ekta Manch, respectively, have been accused of instigating clashes at an important Dalit event in Koregaon Bhima, near Pune, on January 1. Many were injured in the violence, which sparked protests by Dalits and a state-wide shutdown. Ekbote was held on March 14, but authorities have not yet given any indication that they would also arrest Bhide, who is based in Sangli.

Ambedkar’s Bharipa Bahujan Mahasangh and other groups from across the state announced last week that they would take out a protest rally in Mumbai to press for his arrest. Authorities denied them permission, citing students’ exams. Over 800 protesters, however, still marched on Monday, facing police roadblocks.

We are fakir and we are not scared of going to jail. We will fight to keep our freedom.
-Ambedkar

Ambedkar, the grandson of Dr BR Ambedkar, repeatedly took swipes at Modi, accusing him of trying to undermine democracy. “We are fakir and we are not scared of going to jail. We will fight to keep our freedom,” he said. At one point, he even used Modi’s famous greeting “Mitron” to address the crowd.

Ambedkar raked up the 2003 murder of a former Gujarat minister, Haren Pandya, and said Modi would have to answer questions if he didn’t direct Fadnavis to move against Bhide. “Ghosts from the past will come to haunt Modi if he doesn’t stop protecting Bhide,” he said, without elaborating.

Through a single tweet, Modi warned the Maharashtra government against arresting Bhide, Ambedkar alleged. “On the birth anniversary of Chhatrapati Shivaji, Modi had tweeted his photo along with that of Bhide. By doing so, he was sending out a signal that Bhide should not be touched,” he said. 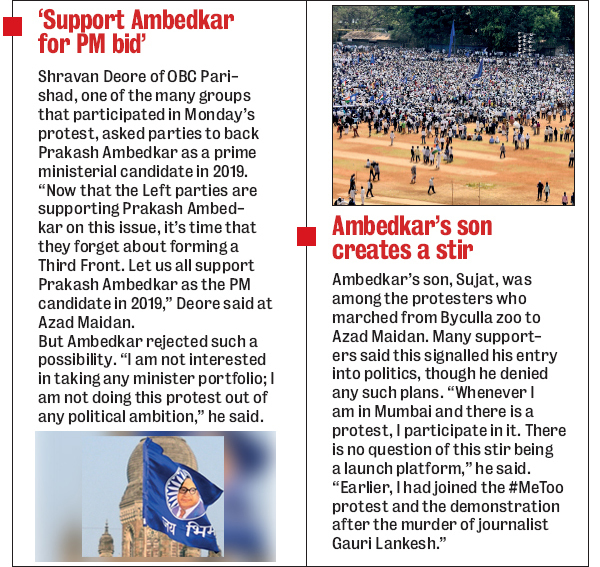 On indications from authorities that there is not enough evidence to arrest Bhide, Ambedkar claimed Raosaheb Patil of Shiv Pratishthan had, in a Facebook post, mentioned Bhide’s role in triggering the Koregaon Bhima violence. “Patil had clearly written about Bhide’s involvement. (And) the chief minister claims the government doesn’t have evidence against Bhide,” Ambedkar said. “Let a court decide whether (available) evidence is valid or not.”

On January 1, Dalit groups had gathered near Pune to mark the 200th anniversary of the Bhima-Koregaon Battle, in which Dalits fought alongside the British against the upper-caste Peshwa army. Rightwing groups opposed to the celebration of a “British victory” in the 1818 battle allegedly attacked them with stones. Two first information reports have been registered against Ekbote and Bhide following complaints by activists Sushma Andhare and Anita Salve. Ekbote has denied any involvement, but the Supreme Court has rejected his request for bail.

Several groups, including political parties, were part of Monday’s protest. Sambhaji Brigade, Maratha Mahasangh, OBC Parishad, Dhangar community, Mali community, CPI (M) and CPI, AAP, Yashawant Kranti Sena, Trade Union Joint Action Committee, NGO Life in Life, and Samyak Vidyarthi Andolan were among them. Most of the protesters reached Azad Maidan by cars, buses, and trains. But one faction marched from Byculla zoo. Ambedkar’s son, Sujat, was among them. Many supporters said this signalled his entry into politics, though he denied any such plans.

“Whenever I am in Mumbai and there is a protest, I participate in it. There is no question of this stir being a launch platform,” he said. “Earlier, I had joined the #MeToo protest and the demonstration after the murder of journalist Gauri Lankesh.”

Ambedkar’s brother, Bhimrao, said people who came to Mumbai from various districts for the Elgar Morcha were led peacefully to Azad Maidan.