Dalit Rally – There is no call for revenge, which upper-castes need to learn 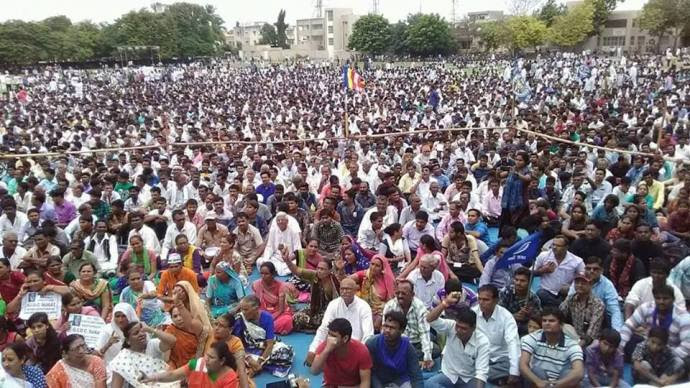 There comes a time when one needs to speak; I speak of the Una Independence Day Rally of Dalits, at the end of a 10-day 400-km Dalit Asmita Yatra following a massive Dalit congregation at Ahmedabad, Gujarat, on July 31.

Whatever one’s political, social or religious preferences, inclinations or beliefs, anybody who has respect for the Constitution of India would welcome the show of strength and combined determination of Dalits congregated from many states at Una. The mass gathering demanded azadi from oppression, exploitation, inhumanity and indignity, and pledged not to handle dead animals or perform sanitation work, hitherto their deemed duties among other degrading and menial tasks assigned to them over centuries in a society dominated by “upper-caste” people. What is significant is that in the agitation, there is no call for revenge, something that the so-called upper-castes need to learn from.

But let us look at the pernicious Great Indian Caste System (GICS), which is alive and well, thank you, notwithstanding the Constitution of India. Flogging and killing of Dalits, raping, stripping-parading and dishonouring their women, and other unspeakable atrocities against Dalits for committing “crimes” of skinning dead cows, wearing chappals, entering temples, drawing water from “upper-caste” water sources, even becoming economically prosperous, etc., have been happening for ages, but occurrence of such atrocities are accelerating and becoming more brazen in recent times. Dalits were and continue to be thought of as inferior and ‘dirty’, deserving of oppression, supposed to “know their place” and be “kept in their place”. A Dalit even inadvertently stepping out of line invites harsh, repressive punishment, especially in rural India. This is not unlike the manner in which African slaves were treated and their “free” progeny treated in USA upto 1965, or Africans in their own homelands by European settlers.

Reported crimes and atrocities against Dalits and Adivasis by “upper-caste” persons and groups would take many, many volumes, and still be only the tip of the iceberg – the vast majority of unreported atrocities are below the level of public perception for more than one reason. The Una rally calls for going beyond ennumerating and condemning atrocities; it calls for vision, hope and faith in the cause.

There are many challenges ahead for Dalits to forge unity, realize azadi and win justice, equality and liberty on par with other Indians. Two important challenges are ‘caste’ and ‘communication’. Dalits are divided amongst themselves by that same monster of caste hierarchy, and Dalit disunity is clandestinely encouraged by upper-caste machinations. This social hurdle is possibly the most important for Dalits to address and overcome. Another hurdle is the language issue – a Dalit from a state in south India or east India cannot speech-communicate with her/his counterpart in another state. This communication problem may not be so serious in most of the North Indian states because Hindi is widely understood. But both hurdles are interconnected. Overcoming the internal ‘caste’ divide will lead to the desire to unite, and overcoming the ‘communication’ hurdle will facilitate pan-India unity.

Dr.Ambedkar clearly pointed the way, saying: “Ours is a battle not for wealth or for power. It is a battle for freedom. It is a battle for the reclamation of human personality”. A very serious challenge to the Dalit march towards freedom will be political, from inimical and disruptive forces stoking or instigating internal dissension. It will call for the present Dalit leadership to chart a course and groom young leaders from within the Dalit communities to stay on that course, for that leadership to have clear vision, and network within themselves and with Adivasi communities which are also moving towards freedom. Identifying the main challenges of ‘caste’ and ‘communication’ along with following Dr.Ambedkar’s advice of “… educate, agitate and organise; have faith in yourself”, might be the target for the Dalit leadership of tomorrow.

Shakespeare wrote: “There is a tide in the affairs of men, Which taken at the flood, leads on to fortune. Omitted, all the voyage of their life is bound in shallows and in miseries. On such a full sea are we now afloat”. The Una rally is that full sea. That time is now. Dalits demand nothing more than constitutionally guaranteed justice, equality and liberty, and will accept nothing less. Jai Bhim!

Major General S.G. Vombatkere, VSM, retired in 1996 as Additional DG Discipline & Vigilance in Army HQ AG’s Branch. He is a member of the National Alliance of People’s Movements (NAPM) and People’s Union for Civil Liberties (PUCL). With over 500 published papers in national and international journals and seminars, his current area of interest is strategic and development-related issues. Email: [email protected]