Dalit transmedia artist and activist on why she marched against Trump 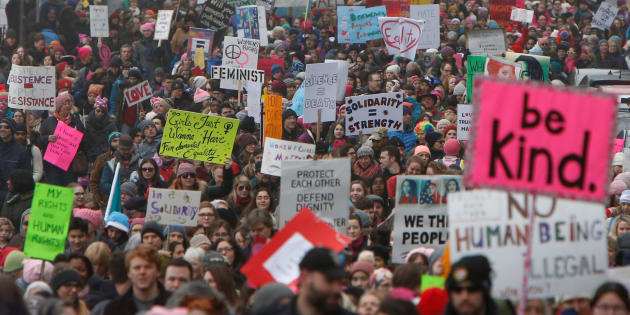 I marched in the Women’s March, Washington, as a proud Dalit-American. I marched for many reasons but here are some of the most important.

I marched for the 130 million Dalit women who resist caste apartheid every day.

I marched so that the world may know of the powerful force we are, and that the freedom of all women is connected to Dalit liberation.

I marched so that it was clear that for all women to be free, we must end caste apartheid in our lifetime.

I marched for all the Dalit, Bahujan and Adivasi women we lost to caste-based sexual violence.

I marched for Delta Meghwal, the brilliant young student and artist, who was raped and murdered in her school by her teacher.

I marched for Jisha, the young law student, who slept with a sickle under her pillow, who was raped and murdered in her home for speaking on behalf of oppressed people for right to their land.

I marched for the Bhagana survivors, whose families have been occupying at a protest site, for a year in the capital, fighting for some scrap of justice, but are denied by the violent Indian caste apartheid state.

I marched for the thousands of other Dalit women who have faced caste-based sexual violence. Some do not make it and others defy it. But our families carry these wounds forward.

I marched for Dalit, Adivasi and Bahujan trans women, Living Smile Vidya, Grace Banu, Angel Gladys and others, who fight so that all trans folks may have a life free from violence, with social and economic dignity. Both Dalit and larger trans movements continue to silence the voices of Dalit, Adivasi and Bahujan trans folks. I marched so that they know that the world will one day come to know the incredible beauty of their tenacity and recognise that today, we tried to celebrate the way they carry their struggles forward with grace and fire.

I marched because the same week that Trump was inaugurated, Radhika Vemula, mother of the institutionally murdered Dalit student activist, Rohith Vemula, was assaulted and arrested for merely wanting to commemorate the death of her son. I marched so she knows that her battle means everything to us and we will not let them silence the struggle for Rohith and all Dalit, Adivasi and Bahujan students.

I marched for Manjula Pradeep, one of the most accomplished leaders of the Dalit movement in India who has cofounded and built Navsarjan Trust, one of the oldest and most respected Dalit organisations in the country. The Modi government shut them down, claiming they were “propagating caste unrest” by organising and speaking out about caste discrimination and violence.

I marched because Trump’s relationship with Modi will only make all this violence and social inequity worse and the Savarna networks in the US will only amplify the violence they are capable of in India.

I marched because progressive American women need to know intersectionality is not just about the issues at home, but about how we build solidarity across nations. And the battle against Trump must also include the battle against Hindu fascism. This includes calling out American progressives who welcome folks like Tulsi Gabbard, who openly supports Islamophobic and anti-Dalit Hindu fascists.

I marched also so that Savarna/dominant caste women could confront the knowledge that there is no caste-less feminism and that intersectionality, for them, must begin with the understanding that they own that burden of calling out and resisting their own Brahminical and Hindu fascist networks, instead of expecting Dalit, Adivasi and Bahujan women to do this work for them.

I marched also with Muslim and other Immigrant women, working with them to disrupt the inauguration. Because so many Muslim and immigrant women have carried the water for so many Dalit movements and in turn we too carry theirs.

I marched for my parents who fled the caste apartheid as immigrants and were able to thrive in a country away from that violence. I march for all immigrants, asserting that we will not hide from Trump, but resist for all of our immigrant sisters.

I marched for Black Lives Matter and Say Her Name because the state violence that operates as violent policing. Dalits stand deeply in solidarity with Black folks, as we suffer from similar state violence in India. We cannot allow it to continue and we see our struggle for freedom deeply intertwined with theirs.

I marched for climate change. For what America does with its fossil fuels affects the world. Asia was the biggest victim of natural disasters last year, and climate change will make South Asia home to the largest numbers of climate refugees and food-insecure people in the world.

I marched because the era of predatory rape culture and exploitation of peoples must end.

I marched also because I too have used Planned Parenthood, and believe all women have the right to healthcare, afforded to them with dignity and privacy.

I marched because the era of predatory rape culture and exploitation of peoples must end. And the Predator-in-Chief, the Republican legislature, and his cabinet of racist, usurping 1 percenters must be stopped.

I marched lastly to acknowledge the leadership of indigenous resistance which has welcomed settler colonial communities and has held the space for another vision for our country and our world.

From Standing Rock to Chhattisgarh, indigenous people’s struggles are all of our struggles.

And finally I marched because we cannot allow predatory rape culture to destroy, pillage and rape the earth so that there is nothing left. I believe women can make and sustain change, with understanding, with intersectionality, with sensitivity, and with love.

And that time is now.