Dalit women are brewing their own social revolution

After being on the sidelines of Dalit and feminist movements for long, Dalit women are now standing up for their rights 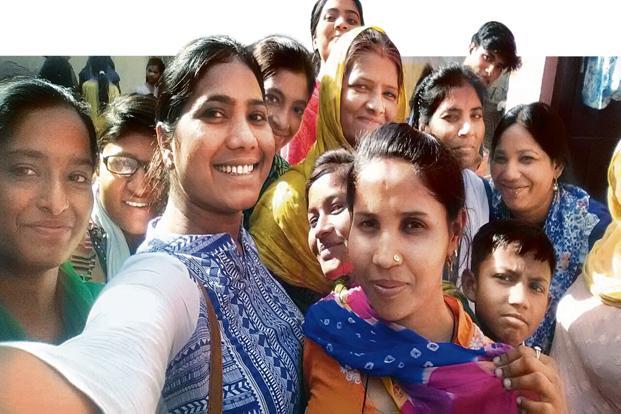 Manisha Mashaal from the NGO Swabhimaan Society takes a selfie with anti-caste activists in Kurukshetra.

New Delhi: In 2008, seven women, aged 19-24, walked into a police station in Haryana’s Indri village in Kurukshetra district. Dressed in salwar-kameez with dupattas draped around their necks, they looked tired but confident, angry and brimming with questions. They wanted to meet the SHO and ask why no FIR had been filed in the rape and murder of a 13-year-old Dalit girl, although two days had passed since her body was found in the village. At first, the in-charge of the police station insisted no such incident had happened but later asked if the victim was related to the women. “She is one of us. If it is her today, it could be us tomorrow,” replied Manisha Mashaal, 29, a grassroots anti-caste activist, and part of Swabhimaan Society, an NGO working for the rights of Dalit women. “But,” said the man, “our women don’t walk into police stations like this. They don’t talk so much. Chalo now really tell me who has sent you.”

It was the first time Manisha, then 19, and the six other women had seen the insides of a police station. For the policemen as well, it was a surprise to see these women, all Dalit, asserting their identity—in a northern state that’s notorious for its many discriminations against girls and women, as seen in sex-selective abortions, honour killings and a skewed sex ratio. The women had left their homes in Kurukshetra at 7am, walked some miles, hopped onto a bullock cart for a few kilometres, took a lift for a few more and reached Indri around 2pm.

After meeting the victim’s family in the village, the group went to the police station and left only when an FIR was filed—this after the victim’s family had already visited the same police station earlier. Even though an investigation was conducted, the case was closed and no arrests were made. “Forget getting justice, so many cases of violence against us are not even acknowledged. It makes my blood boil to see how we still have to fight for these basic fights… how somehow the rape of Dalit women even today does not bring the country out on the streets,” says Manisha. “Dalit women have been left outside the Dalit movement and mainstream feminism for too long. We are forced to fight our own fight.” 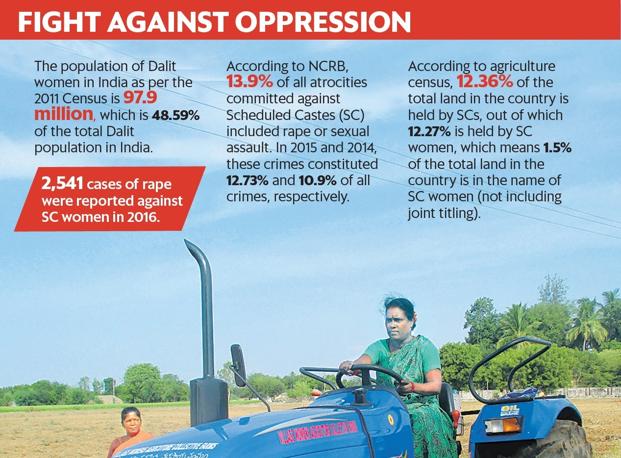 Shakila from the Pallur Dalit Women Collective Farm leads a group of women to occupy government land in Tamil Nadu.

The gender in caste

The question of caste-based discrimination has by and large focused on the identity of a Dalit, irrespective of the gender, and the injustices meted out to the social group as a whole. However, with the beginning of the 21st century and more so after 2012, several groups of Dalit women, big and small, have come up across the country, trying to assert their identity and openly talking about the intersection of caste and gender.

“Post the 1990s, with the internationalization of Dalit issues, opportunities opened up to talk about specific forms of caste violence perpetrated against Dalit women,” says S. Anandhi, professor at the Madras Institute of Development Studies (MIDS) in Chennai. “The Beijing International Women’s Conference in 1995 led to more systematic engagements with caste and Dalit women’s question. But, the Dalit movements across India had not provided adequate space for women to articulate issues of triple forms of oppressions against them: caste, class and gender oppressions. Today, with increasing caste violence against Dalits and with the international level of articulation of Dalit rights issues, there seems to be an increased assertion happening across the community, including among its women.”

Mainstream feminists are also casteists in some way or the other. Our fight is different from theirs. Our fight begins with land– Sumedha Bodh, General Secretary, Rashtriya Dalit Mahila Andolan

Dalit commentators have long spoken about the double oppression of Dalit women, and also their unacknowledged role in the larger Dalit movement. Although Dalit women have a history of participation in the movements led by Dalit icon B.R. Ambedkar, the movement came to be dominated by men after his death. Ramon Magsaysay Award winner and national convener of the Safai Karmachari Andolan, Bezwada Wilson, says the fight of these women’s groups is for the larger good of Dalit society and should be supported by all who care for the movement. “These groups are challenging caste and patriarchy and their fight is sharper than the traditional fight of Dalit groups. They are questioning structural changes, which will benefit the wider society and hence their fight should be welcomed.”

Swabhimaan Society is one such group of 35 Dalit women—some engineers, some law graduates and some still in school. The group does not have many big success stories to its credit yet, but it is a reflection of the aspirations of these young women and a sign of reconfiguration of the identity of a Dalit woman in India. Since it’s Haryana, where in January this year 10 rapes were reported in 10 days, the group is fighting violence against Dalit women by holding dharnas, awareness programmes, and helping victims of violence and their families get the right counselling and legal aid.

Our rape vs their rape

A few months before the Delhi gang rape of a young woman in a moving bus, more than 22 rapes of Dalit women in Haryana were reported inside a month. Several marches were held, protests took place, but not much of it resonated in Delhi. Then on 16 December 2012, “Nirbhaya” happened. The rape of the 23-year-old student forced India to change its rape laws and opt for more stringent measures through the Criminal Law (Amendment) Act, 2013. The incident sparked public outrage across India, bringing thousands of people onto the streets against the failure of the authorities to ensure women’s safety. This was the moment Dalit women groups started asking questions.

“After Nirbhaya, so many people came forward. Why didn’t they do so for rape among Dalits? We have realized that mainstream feminists are also casteists in some way or the other. Our fight is different from theirs. Our fight begins with land. They don’t get it. They wouldn’t get it,” says Sumedha Bodh from the Rashtriya Dalit Mahila Andolan, an organization of 500 women working across Odisha, Bihar, Jharkhand, Haryana and Madhya Pradesh. Having been associated with several Dalit rights groups, Bodh said there has been a strong realization among Dalit women about the need to have separate platforms to speak and act. Depending on which state they are working in, and what issues the state is grappling with, the group chooses the issues it focuses on—mostly it deals with cases of witch hunting, land rights and education.

The fight of these women’s groups is for the good of Dalit society and should be supported by all who care about the movement– Bezwada wilson, National convener of Safai karmachari Andolan

Groups like Manisha’s are collecting documents on why 110 cases of rape and murder of Dalit women between 2010 and 2018 in 14 districts of Haryana all ended up in a “compromise” being struck between victims’ families and alleged suspects. Another Dalit women’s collective, All India Dalit Mahila Adhikar Manch, last month participated in the United Nations Human Rights Council at its 38th session in Geneva. The collective submitted a report titled Voices Against Caste Impunity: Narratives of Dalit Women in India, which compiled accounts of witnesses, statistics and testimonies about the effects of caste-based violence in India.

The Manch, formed in 2006, has since been working for women’s rights by operating at the grassroots level, as well as working on leadership building of Dalit women at the national level. In December last year, it organized a conference for and by Dalit women in Pune, and has also been carrying out marches in different states, including Rajasthan and Haryana, to raise awareness about caste-based discrimination. To spread awareness online, the group has also been mobilizing support under #DalitWomenFight.

Where are the women?

Except for their role in education (setting up schools) in the initial phase of the Dalit movement, there was neither any particular concern for women nor much participation of women on a large scale.

According to the book, Dalit Women: Vanguard of an Alternative Politics in India, edited by Anandhi and Karin Kapadia, “Formal Dalit politics totally ignores Dalit women’s micro level politics of becoming as well as their struggles to collectivise and to address their multiple oppressions. This male sphere of Dalit politics considers women’s political struggles to be entirely marginal to the “more important” male-led politics of Dalit rights and social justice.”

“Marginalized caste groups such as the Dalits are witnessing some forms of socio-economic mobility, but women within these groups are experiencing different forms of constraints due to such changes. In fact they are burdened with more responsibilities of meeting the demands of the new family status. The new strategies and forms of Dalit women’s collectivism has to contend with these changes,” says Anandhi. She also says that male migration-related mobility continues to confine Dalit women to agricultural wage work. Yet, as expected, Dalit women continue being only workers—with no ownership, real or titular, of the land.

Keeping this in mind, Tamil Nadu-based NGO Society for Rural Education and Development (SRED), was founded in 1979. Working with Dalit and adivasi women, the group formed by Fatima Burnad works on the premise that to fight caste-based discrimination, owning land is an important aspect. What SRED does is form collectives of women who identify wastelands and government lands, and then occupy those.

“This occupation of land has helped the Dalit women in manifold ways. They are able to express themselves. They are now owners of lands, a status that has helped them feel proud, of as it has brought them dignity and status at family and community levels,” says Burnad. The movement has reached out to 350 villages in three districts of Vellore, Tiruvallur and Kancheepuram in Tamil Nadu and 19 villages in Andhra Pradesh.

Clearly, several of these groups, grassroots as well as online, are slowly brewing a social revolution. A beginning has been made in challenging what sociologist Sharmila Rege called the “masculinization of Dalithood and savarnization of womanhood”.

Shehla Masood Case- Saba's counsel to file contempt case against jail staff
Modi - Mr Clean India - But his record on Pollution is dirty
Free six other activists imprisoned for their participation in the Nonadanga anti-eviction struggle!
Maharashtra - In 10 years, only 3 doctor suspended for medical negligence #WTFnews