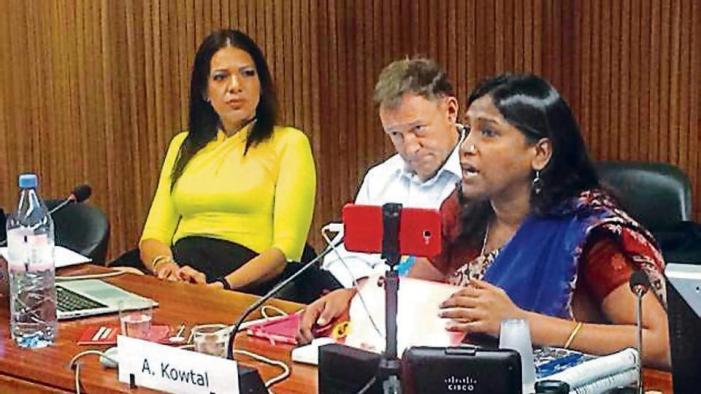 The report also mentioned that the SC/ST commissions and the National Commission for Women (NCW) may not be able to fully grasp and address gendered caste issues.

The All India Dalit Mahila Adhikar Manch (AIDMAM), a collective of Dalit women and girls, which works as an advocacy forum, released a report —Voices Against Caste Impunity: Narratives of Dalit Women — and showed a short documentary, #DalitWomenFight. In a first, a Dalit women’s collective organised a side event and offered testimonies of caste-based gender violence, at the 38th session of the United Nations Human Rights Council, currently under way in Geneva.

The All India Dalit Mahila Adhikar Manch (AIDMAM), a collective of Dalit women and girls, which works as an advocacy forum, released a report —Voices Against Caste Impunity: Narratives of Dalit Women — and showed a short documentary, #DalitWomenFight.

The film tells the story of a 17-year-old girl from a Scheduled Caste who was sexually assaulted and killed in Haryana in 2017. Her family is still awaiting compensation while one accused named in the FIR is yet to be jailed. This was one of the three testimonies presented by Asha Kotwal, AIDMAM general secretary, at the event.

The report quotes official data on caste-based gender violence and discrimination and puts it in context through several narratives of Dalit women and girls. The National Family Health Survey (4th round) shows that 33.2% women from the Scheduled Castes experience physical violence since the age of 15 compared to 19.7% in the ‘Other’ category. In the past decade (2007-2017), there has been a 66% growth in crimes against Dalits, as per the National Crime Records Bureau.

The report states, “It is important to remember that these figures should not be taken at face value. The number of cases registered is a fraction of the actual number of crimes that take place. In many instances, these crimes do not get reported due to non-cooperative police and judicial machinery, shame and social stigma, and the fear of retaliation by the dominant caste groups.”

“Will the United Nations consider caste-based crimes as one of the most serious human rights crisis?” Kotwal asked. “Caste-based discrimination is a global issue, but India should take stronger initiatives as it has the largest population of Dalit people,” she said.

A panel of experts, including Rita Izsák-Ndiaye, former special rapporteur of the United Human Rights Council for minority issues; Dubravka Simonovic, the UN special rapporteur on violence against women; John Fisher, Geneva director of Human Rights Watch; and Vrinda Grover, advocate with the Supreme Court of India, spoke of the ways in which Dalits are denied justice in India.

“Crimes are committed against Dalit women and girls in India with impunity because there have been no consequences for perpetrators,” said Grover, who joined the discussion over Skype.

The panellists also pitched for strong support by a global solidarity movement and seek stronger actions from within the UN and campaigns from international human rights organisations.

“Many Dalit victims and their families in India are not informed of their rights and atrocities committed against them are crimes. Institutionalised impunity for crimes committed against Dalit women in India must be addressed. The police’s reluctance and deliberate omissions to register complaints and arrest perpetrators must be questioned,” Grover said.

In 2016, Izsák wrote a report on caste-based violence faced by an estimated 250 million people worldwide, concentrated in South Asia. The report defined caste-based discrimination as that based on descent, labour stratification, forced endogamy, and the practice of untouchability. However, India refused to accept the report, stating that caste groups cannot be termed as minority.

The UNHRC session, which began on June 18, will end on July 6.

Mukesh Chhabra suspended from debut film after sexual harassment allegations #MeToo
Man held for trying to molest woman in Noida #Vaw
Polarisation is a driver of fake news as people are more ready to blame others
Under the BJP-RSS, Dalit cooption is accompanied by denial of dignity and rights