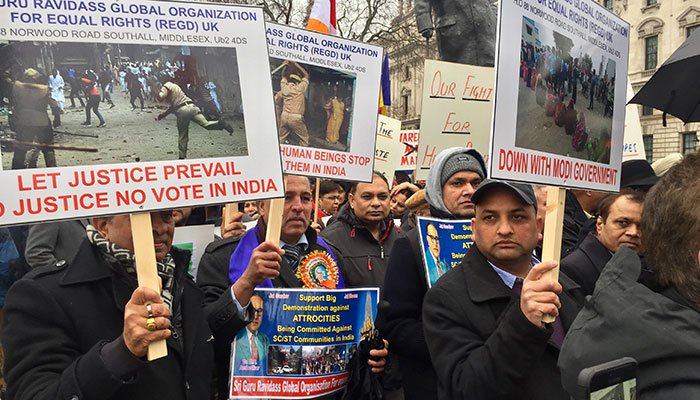 LONDON: Dalit groups from across the United Kingdom have called for the international community to take notice of extreme violence against millions of Dalits and other minorities by Narendra Modi‘s Hindutva government.

UK’s key Dalit organisations came together for a large march bracing heavy rain on Saturday to protest against the incarceration of over 7,000 Dalits in Bhima-Koregaon, Maharashtra, who were picked up by the security forces after clashes and riots earlier this month.

The Dalits had gathered to celebrate the historic January 1, 1818 event when a few hundred Dalit soldiers had defeated the massive Peshwa Army. As the Dalits gathered to celebrate, the upper caste Marathas, supported by the security forces, attacked the participants violently, killing one and injuring and maiming hundreds.

At the London demonstration to show solidarity with the victims, the Dalit organisations were supported by progressive groups, including South Asia Solidarity Movement, demanding the release of prisoners and an end to attacks on women and activists. The protestors said that the continuing incarceration of Dalit Leader Chandrashekhar Azad was illegal and unjustified.

They said that the slur on Dr B R Ambedkar by the Indian Union Minister Anant Kumar Hegde and a threat to do away with the Constitution altogether had alarmed Indians all over the world who were worried that Modi had headed towards imposing Hindutvaism on the entire Indian polity.

The protestors travelled from Birmingham, Bradford and London for the march and carried banners and placard which read: ‘Our fight is for human rights’, ‘equal rights for Dalits’, ‘stop atrocities on Dalits’, ‘dynamite the Hindu scriptures’, ‘we stand together against hate’, ‘Dalit rights are human rights’, ‘value human life, not just cows’, ‘Hindutva is a threat to India‘s unity’, and ‘end caste violence against Dalits, now’.

The rally at the Parliament Square, Westminster, marched towards the Indian High Commission and throughout the way protesters chanted slogans against the atrocities being committed against Dalits, Muslims and Sikhs.

The memorandum called for the Indian government to bring the Hindutva leaders and activists who planned the violence at Bhima-Koregaon, Sambhaji Bhide and Milind Ebute to justice.

“Release the thousands of Dalits arrested in Maharashtra in the first fortnight of January, immediately drop the charges against them and launch a transparent public inquiry into the events of January 1 and 2. Immediately release Chandrashekhar Azad, the leader of the Bhim Army,” signed by nearly a dozen Dalit and human rights groups.

Satpal Muman on behalf of the Dr Ambedkar Memorial Committee of Great Britain commented: “Mr Ram Nath Kovind, President of India, is a Dalit and is perceived as such. He is in a position to understand the plight of Dalits who are daily facing violence at the hands of upper caste. We are urging him to ensure exemplary punishment, according to the law, for all those guilty of inflicting violence against Dalits at Bhima-Koregaon;, and to take immediate and concrete steps to curb the rise of Hindu fundamentalism which is currently threatening the democratic fabric of India.”

Keval Bharadia of South Asia Solidarity Group, one of co-organisers of the demonstration, said: “India is turning into a republic of fear and violence, where mob-lynching by the Hindu supremacist forces is a common occurrence. The descent into fascism has meant a horrific increase in attacks on Dalits – but the President, Mr Ram Nath Kovind, a Dalit himself, is silent. We urge him to speak out and stem this tide of violence.”

Renowned activist Amrit Wilson told that Muslims were facing “genocide-like situation” in India and there was no one to speak up for them. She said that now Dalits were facing the same situation. “International community must take notice of what’s happening in India. It’s a scandal that needs to be exposed.”

9-year-old suing the UK Govt because they won't help her see her father
Chhattisgarh- How black chicken Kadaknath is changing lives in Dantewada
SAFFRONIZATION OF EDUCATION? - Another rewrite of history textbooks could be on cards
Press Release : Bhopal Gas Victims demand Yoga treatment