Dams on Ganga are no less than “ticking” time bombs: NAPM 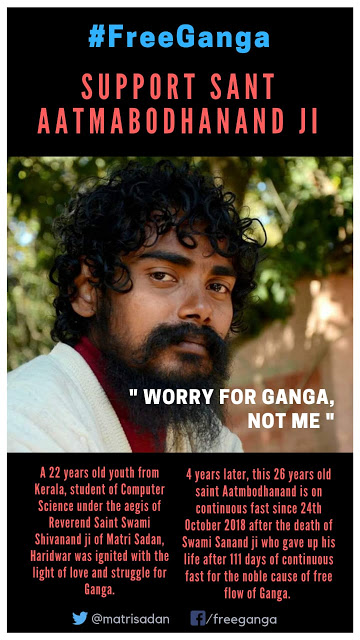 In a letter to Prime Minister Narendra Modi, senior activists attached with the top civil society network, National Alliance of People’s Movements (NAPM), have wondered as to how many more sons of Ganga will have to pay with their lives to save “mother” Ganga. Congratulating Modi for taking the policy decision not to make new dams on the river, the letter, however, regrets, “Presently, three under-construction dams, Tapovan-Vishnugad, Vishnugad-Pipalkoti Singoli-Bhatwari, are threatening the survival of this holy river adding to the damage already done by a number of existing dams.”
Calling these dams “no less than ticking time bombs”, the letter says, “Swami Sanand fasted for 111 days to draw of the powers to be to its cries for survival before he succumbed unheeded. Carrying on the baton, Sant Gopaldas fasted for 146 days when he disappeared under suspicious circumstances unheard and unheeded. Presently the young Brahmachari Aatmabodhanand from Matri Sadan, Haridwar, has been on a fast since October 24, determined to carry on the baton for Ganga for a positive response.”

The letter says, “The tunnels being built for dams have been weakening the Himalaya Mountain. Landslides are on the rise. The spiritual charges from the Holy Shrines of Badrinath, Kedarnath Gangotri are being destroyed by the turbines of the existing hydropower projects at Vishnu Prayag, Srinagar, Maneri, Tehri and Koteshwar.”

It adds, “The water of the Holy River stagnates in the Tehri Reservoir and becomes dead without oxygen as established by the methane emissions recorded by the National Environment Engineering Research Institute. Research by Japanese scientist Masaru Emoto has shown that water crystals of spiritually charged and free-flowing waters are of beautiful forms while those of negative thoughts and stagnant waters are of ugly forms.

Research by Swiss organization Aqua Viva has shown that water upstream Tehri is spiritually charged and has a halo while downstream is without the halo.”

Copies of the letter have been sent to Nitin Gadkari, Union minister for water resources and Ganga rejuvenation, and Trivendra Rawat, chief minister of Uttarakhand. It has been signed, among others, by Medha Patkar, Prafulla Samantara, Dr.Sunilam, Adv Aradhna Bhargava, Rajkumar Sinha, and Swami Agnivesh.

The letter seeks to “prohibit” mining and stone crushers within 5 km on either side of Ganga, and efforts to immediately engage saints who are “sacrificing their lives in an unbroken chain of fast unto death at Matri Sadan”.

Online #censorship: How government should approach regulation of speech
Bihar fake topper Ruby Rai is not the culprit, but the victim
Irom Sharmila and the Challenge of Dirty Hands
#India - Tejpal case obscures the reality of unequal newsroom #Vaw