Dangerous Precedent Of A Jain Priest Preaching To The House

After getting a fairly strong battering on social media regarding  its position on the Jain Muni episode, the Aam Aadmi Party (AAP), through its spokesman, Shri Ashutosh, has written a clarificatory piece on ndtv.com. If AAP had made its position clear from the start – that it supports Vishal Dadlani‘s fundamental position of not mixing religion with politics and that it is against an invitation to a religious leader, but disapproves of comments against the Muni – events as far as his resignation is concerned may have taken a different course. In any case, that is for the AAP to sort out. Certainly, the omission of a single word of condemnation against the FIRs filed against Shri Dadlani by the Delhi and Haryana police point to contradictions in the AAP approach. But more of that later.

A religious leader addressing elected members in an official session within the Vidhan Sabha is unheard of in India’s parliamentary history. When a ministry, or a parliamentary committee, or even the government wishes to give members the opportunity to hear a specialist who is not a member of the House on any particular issue, the custom is to invite MLAs for such a lecture which may be within the premises of parliament or the state assembly, but does not form part of the session itself. There is good reason for this becoming the accepted standard. It prevents the ruling party of any given state from misusing the assembly for matters extraneous to the agenda of the assembly. The state assembly cannot be and should not be converted into a site for religious pravachans (sermons), however eminent the speaker might be. MLAs or MPs, as the case may be, are not being paid by the public exchequer to listen to pravachans. They can go to temples or tune into TV programmes to satisfy their spiritual desires.

Yet the Haryana Chief Minister M L Khattar breached constitutional and parliamentary norms and invited a Jain Muni to address MLAs at an official session of the assembly. The Governor gave his stamp of approval to this breach. He insulted his constitutional position and propriety by sitting below the monk. He should not have attended in the first place. The Haryana government had the support of both opposition parties, the Congress and the INLD, whose respective leaders in the assembly not only sat through the lecture but showered fulsome praise on the Muni. Thus for the main political parties in Haryana, a pravachan by a non-elected religious leader at an official session of the state assembly is the new normal. They can now quarrel among themselves as to which religious leader should be called and some of them who claim to be secular can now also argue to invite leaders of other religious hues “to balance things out.” It is a dangerous and wrong precedent. It sanctions the burial of secular standards in the functioning of assemblies.

The Haryana state committee of the CPI(M) has been perhaps the only party in the state to criticize this as a flagrant challenge to the secular ethos of parliamentary democracy in India. It has reiterated the principle of separating religion from politics which is violated by calling religious leaders to preach to elected MLAs. 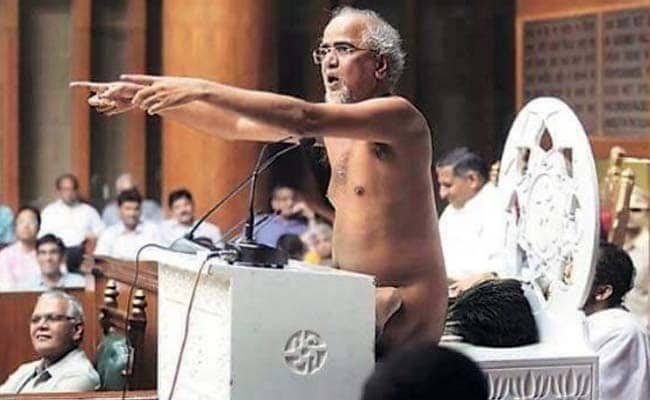 Music composer Vishal Dadlani referred to the speech of Jain monk Tarun Sagar as “monkery” on Twitter.
The Muni himself anticipated such criticism in his speech when he said “The Chief Minister Manohar Lal might be blamed for saffronising politics with the ‘Kadve Pravachan’ programme in the Vidhan Sabha. But, it is the purification of politics in real terms rather than saffronisation.”
Let’s take the saffronisation issue first. The Haryana Chief Minister is a long time RSS pracharak. His contempt for the constitution of India has been made clear on several occasions including when he declared that all those who eat beef should go to Pakistan. As is well known, when the constitution of India was adopted, the RSS strongly criticized it, promoting the Manu Smriti as the basis for India’s legal framework. The Chief Minister has used the utterly opportunist vote bank politics practiced by the Congress and the INLD to push his Hindutva agenda. In other assemblies dominated by the BJP, they may push the same agenda, saffronising the assembly. The Congress, to its shame, will have no answer unless, belatedly, like the AAP has done, it takes a position on its representatives’ role in the Haryana Assembly and expresses its opposition to the saffronisation of parliamentary norms.

Now as far as the Muni’s assertion of “purification” is concerned, here we get into more personalised issues, which is always avoidable. This is not about individual personalities but about principles. However, since his speech is a matter of public debate and has also led to the totally condemnable filing of an FIR against a critic of the content of the speech both by the Haryana government and by the Delhi police, it has to be stated that the choice of the individual by the Chief Minister of Haryana was not fortuitous.

Muni Tarun Sagar has his own understanding of what is meant by the “purification” of politics. He was practicing that when in March 2015 he attended the Virat Hindu Sammelan and endorsed the slogan of Hindu Rashtra and the hateful love jihad campaign of the Vishwa Hindu Parishad. Reminding us of this, activist lawyer Pratik Sinha of Gujarat also draws attention to another “purification” advocated by the said Muni, that is from Dalits and the shudras who he described as “crows instead of swans” in his opposition to reservation. He is quoted as saying “Reservation is bad; instead of swans, crows are being propagated”. And as for women, it would seem that the Muni is against female feoticide so as to ensure girls are born to be “obedient to their husbands.”

Therefore, no prizes for guessing why the Muni was the chosen one for the lecture by the Chief Minister of Haryana and his colleagues. But what about Arvind Kejriwal, Delhi’s Chief Minister? He says he and his family regularly hear the Muni’s lectures on TV and he greatly respects him. Good for him. But hopefully he is not advising the Delhi Women’s Commission Chairperson, the feisty Swati Mahiwal, whose job it is to challenge precisely those male and casteist supremacist cultures promoted by the reported words of the Jain Muni. The Delhi Chief Minister, who is so vocal, as he should be, against the Delhi police acting as the “agent” of the central government has remained silent on the FIR against Shri Dadlani. Does respect for a religious preacher, even a guru, subsume the minimum norms of respect for democracy and free speech and for upholding the right of a citizen like Shri Dadlani to criticise a speech? The FIR against Dadhlani is a travesty of the right to freedom of expression. Recently, the Supreme Court chided a Chief Minister for not being able to take criticism. Religious leaders who stray into political discourses should advise their followers to do the same.