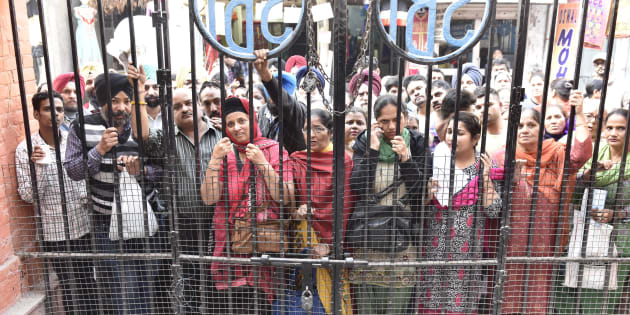 HINDUSTAN TIMES VIA GETTY IMAGES
AMRITSAR, INDIA – NOVEMBER 17: Bank customers waiting to withdraw and deposit Indian currency notes outside State Bank Of India at town hall on November 17, 2016 in Amritsar, India. The Reserve Bank asked people not to hoard currency as there is sufficient supply of notes, even as banks struggled to manage the rush of people thronging branches across the country to exchange the scrapped high denomination 1,000 and 500 rupee notes. (Photo by Gurpreet Singh/Hindustan Times via Getty Images)

As people continued to struggle to get cash on the ninth day after demonetisation, the death toll rose to 55. These are confirmed deaths reported in the national and regional media. The number of unreported deaths may be higher. While most deaths are of the elderly waiting in long bank queues, there are quite a few suicides, especially of housewives.