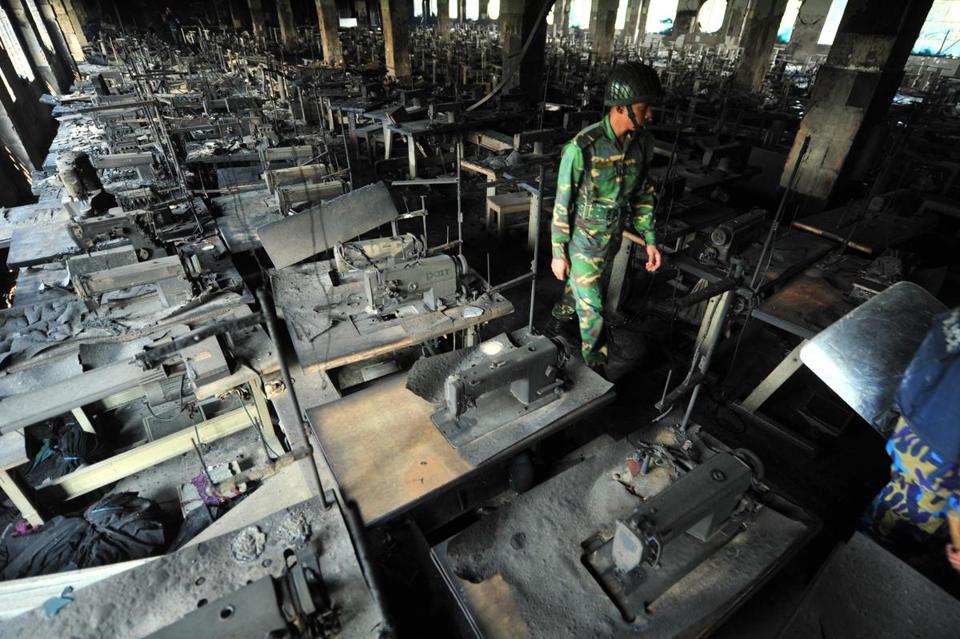 AT 4:45 p.m. on March 25, 2011, hundreds of bells rang across cities and towns in the United States to commemorate the 100th anniversary of the Triangle Shirtwaist factory fire. The fire, which killed 146 garment workers — 129 of them women — managed to get the New York State Legislature to create the Factory Investigative Commission, which eventually made way for better labor laws.

It has been a century since that fire that woke up the United States to labor and worker safety reforms. But nothing has changed in another part of the world — where many US companies are currently manufacturing their products. On Nov. 24, 2012, 112 garment workers were killed in a blaze at the Tazreen Fashions factory in Dhaka, Bangladesh. Just two months earlier, on Sept. 5, 25 workers at a fireworks factory in Sivakasi, India, were killed under similar circumstances; a week later, a total of 283 workers died in two separate fires in Pakistan — 258 in a garment factory in Karachi, and 25 in a shoe factory in Lahore. Two years ago, 29 people were killed in a similar fire in Dhaka, Bangladesh, while manufacturing Gap products. In each of the cases, the fires were followed by a blame game over responsibility and liability. Interestingly, only the fire in Bangladesh has made international headlines because the factory was used by one of the suppliers of Walmart.

But will this well-deserved media attention bring about justice for the families of the victims? An incident like this surely does not go down well in the annual report of companies. For the American companies that worked through numerous intermediaries to get their products made cheaply, the immediate response has repeatedly been to disassociate from the incident, and thereby avoid taking any responsibility for any safety lapse or liability. Walmart has said that it has already fired its supplier, Success Apparel, which had outsourced work to a company called Tuba Group, which owns the Tazreen Fashions factory. Success Apparel has said that it did not know its clothes were being made at the Tazreen Fashions factory. In this maze of subcontracting, which is a norm in the race to minimize costs, the lives of the workers are in limbo, with nobody ready to take responsibility for their working conditions.

Only $470 million has been doled out by Union Carbide Corporation as compensation to the victims of the Bhopal gas tragedy, one of the world’s worst industrial disasters. On Dec. 2, 1984, 27 tons of methyl isocyanate leaked into the city of Bhopal in central India, killing 25,000 people to date, with 120,000 still suffering from air and water pollution. Dow Chemical Company, which merged with Union Carbide in 2001, denies any liability for the incident. It continues to evade Indian courts and the demand for compensation. Almost three decade since the accident, Bhopalis await justice. A horrible disaster, a worse injustice thereafter.

Time and again, corporations have tried to save face by sponsoring sporting events and launching humanitarian foundations. Dow Chemical was the worldwide partner for the London Olympics in 2012. But wouldn’t taking up responsibility for accidents and cleaning up the mess be a better and more credible PR exercise to impress their audience?

But that audience surely does not include workers. At a 2011 meeting to find ways to improve safety at Bangladesh garment factories, according to Bloomberg News, Walmart and Gap officials told attendees that they were not willing to participate in paying for the electrical and fire safety of the 4,500 garment factories in the country. This, they said, was financially nonviable. But the Washington-based Worker Rights Consortium has found that such essential safety upgrades would cost just 10 cents per garment. Yet, for Walmart, which has been reported to outsource the making of garments worth more than $1 billion a year in Bangladesh, saving 10 cents per item appears to be more important than the safety of the workers.

Walmart rides high on its popularity in the United States. With economics and numbers fueling a company’s growth, might it be possible for Walmart’s customer base to demand their favorite store act more responsibly, even as they continue to enjoy its competitively low prices? Perhaps it is up to its customers to decide if 10 cents for a garment is more expensive than the safety of the person who makes it under pathetic conditions. A new wave of safety reforms is also needed, along with a corporate social responsibility that goes beyond events sponsorships and colorful brochures with photographs of smiling children.