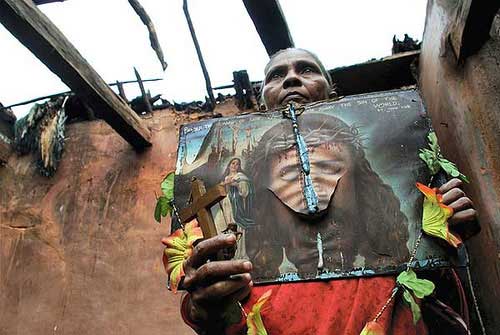 We hope you remember the grave communal genocide in Kandhamal in Odisha, which happened in 2008. Barely after eight days after celebration of Independence day, India witnessed the biggest organized communal attack against the Christians in the last few centuries. Since 2009, people of Kandhamal and outside have been organizing 25th August as Kandhamal Day.each year This year on August 25, 2018 will be the completion of one decade of Kandhamal communal violence.

During this brutal invasion on the Christian community, around 393 churches and worship places which belonged to the Adivasi Christians and Dalit Christians were destroyed, around 6,500 houses were destroyed, over 100 people were killed, over 40 women were subjected to rape, molestation and humiliation and several educational, social service and health institutions were destroyed and looted. Over 12,000 children lost their education. More than 56,000 people were forced to flee from Kandhamal. Several cases of forced conversion to Hinduism by the Sangh Parivar have been reported. And those who had to flee from Kandhamal, are spread out in different parts of the country today. Many of them cannot come back to their villages since they were told that unless they become Hindus, they would not be allowed to survive in Kandhamal. Those who are displaced and working outside their home district, are not just `migrant labour’. They are victims of communal genocide. Perhaps, they are around your own areas in India.

The communal violence in Kandhamal also spread to different parts of Odisha and other states as well. It is too important to note that the original settlers in Kandhamal never expressed violence and the violence was conducted by the Hindutva forces. During these ten years of experiencing violence, the survivors of Kandhamal are still struggling for Peace, Justice and Harmony.

The compensation provided by the Government for the victims and survivors of Kandhamal has been minimal. There have been more than 3,300 complaints, but only 820 odd FIRs were registered. The rest of the complaints were not even registered. Among these complaints, only 518 cases were charge sheeted. The remaining cases were treated as false reports. And out of these 518 cases, 247 cases were disposed off. The rest of the cases are pending before the sessions and magistrate courts. And amongst those disposed cases, many are already acquitted. If you take complaints as a yardstick of justice process, it is just around 1% only.

The court also found it disturbing that the offenders of law were not booked and ordered to review 315 cases of communal violence that were filed. The High Court was of the view that the State Government should review these 315 cases so that the offenders are brought to book. But this process is still not being activated. It should also be ensured that:

Without the above tasks, it would be difficult to ensure justice form the survivors of Kandhamal.

None of the criminals responsible for destruction are in jail today. The murderers, rapists, looters and destroyers are today moving around freely. But, seven innocent Adivasi Christians and Dalit Christians are still in jail with fabricated cases.

It is in this context that the National Solidarity Forum and the Kandhamal Survivors Association are giving a humanitarian call to all those who believe in secularism, democracy, justice, peace and harmony to OBSERVE KANDHAMAL DAY on the coming August 25, 2018. The National Solidarity Forum is a network of over 70 organisations in different parts of the country trying to work for justice for the survivors of Kandhamal. The Kandhamal Survivors’ Association is a grass root movement with units in every affected village in Kandhamal.

Together we appeal to you to support and work for the implementation of the following demands.

The above demands were placed before the President of India 3 years ago by an 8 member team including the survivors and secular leaders like Brinda Karat and Kavita Krishnan. The team was promised that the issues would be looked into. Many leaders from different political parties and people’s movements like Mani Shankar Aiyer, Medha Patkar, Abhay Sahoo, leaders belonging to various religious communities and others have supported these demands and worked for the implementation of the same. However, no action on these demands till today is undertaken.

Therefore, we appeal to you to:

We are sure that if all humanitarian forces join hands to build peace, justice and harmony in this country, we will be able to achieve results in these dark times and protect the values of Indian Constitution so that no such violence takes place in India.

We welcome your responses.

SC reinstates woman who accused Gogoi of sexual harassment
Comedian Munawar Faruqui among 5 held for ‘indecent’ remarks on Hindu deities
Prof G N Saibaba case: Questions raised over stay of witness in Gadchiroli
Proof that the nuclear industry has been dodging its responsibilities for over 50 years