Teenage victim was allegedly kidnapped and repeatedly gang raped in Noida and Ghaziabad last year before being release by her captors a week later. NEW DELHI: Showing exemplary courage, an 18-year-old girl who says she was raped by two men in 2017 got her parents booked when they accepted a bribe from the accused to force her to withdraw her statement in court.

Aware that her parents had been allegedly bribed in order to compel her to change her statement in court in a gang rape case, a 15-year-old victim approached the police with Rs 5 lakh they had accepted as advance, Delhi police said.

The police were surprised that the girl chose to trust them over her parents. “The girl came with a wad of notes and said it was Rs 3 lakh. But when we counted, it was Rs 4.96 lakh,” MN Tiwari, deputy commissioner of police (outer), said. 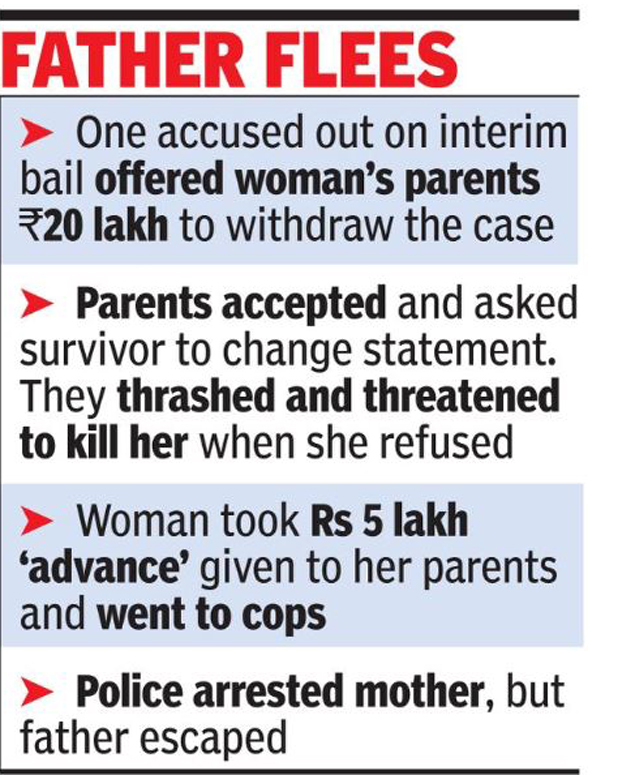 The girl approached the police on Tuesday and narrated her ordeal. She told them she was raped by two men who were unknown to her. “They had kidnapped me after which they raped me and left me at an abandoned spot,” a police official quoted the girl as saying. The girl added that the accused who was out on bail, Sunil Shahi, approached her parents on April 8 and made this offer to them. She said her parents did not once disapprove of the offer and, instead, asked for advance money so that they could start working on convincing the girl.

The victim told the police that she was in her room when her parents met Shahi and heard the entire conversation. She said that as soon as Shahi left her house, she went up to her parents to ask for justification. Instead, they tried to convince her to give a false statement.

“I completely denied taking back the case, but my parents didn’t back out either. They kept trying to convince me and I stuck to my stand. The next morning they thrashed me and blackmailed me, saying that they were poor and needed that money,” she said in her complaint.

The girl says she was raped in August 2017, after which the accused were arrested. One of them, out on interim bail, approached the girl’s parents and offered them Rs 20 lakh if they could convince their daughter to change her statement and withdraw the case. Since they come from a very humble background, they readily agreed.

But their daughter would not stay quiet.

Tiwari said the girl’s parents were booked under the Juvenile Justice Act and for criminal intimidation, threatening someone to give false evidence and criminal conspiracy.

“We arrested the girl’s mother. Her father is on the run. We are also looking for the people who were facilitating this crime,” the DCP said.

The girl lives with her parents in Prem Nagar, Aman Vihar in Delhi. Her parents run a small business in the neighbourhood.

The girl had gone missing on August 30 last year after which a kidnapping case was registered at the Aman Vihar police station, the DCP said.

She returned home a week later and alleged that two men, including a local property dealer, had kidnapped her.

She said she was allegedly taken to multiple places such as Noida and Ghaziabad where she was repeatedly gang raped before being let off a week later. On her complaint, the police registered a case of gang rape and arrested the two accused men. They were recently let off on bail.

“Some people known to the accused had approached her parents and offered Rs 20 lakh to get the girl change her statement in court. Recently, they had given Rs 5 lakh cash as advance payment. The girl was aware of it,” said an investigator.

The parents had allegedly been pressuring the girl to change her statement. But the girl refused to oblige, resulting in frequent quarrels with her parents.

“On April 10, her parents were away in court when the girl decided to report the matter to the police. She knew that the money was hidden under the bed. She picked up the cash and without counting it, reached the Prem Vihar police chowki,” said the officer.

The girl has been handed over to the Child Welfare Committee (CWC), which sent her to a children’s home.