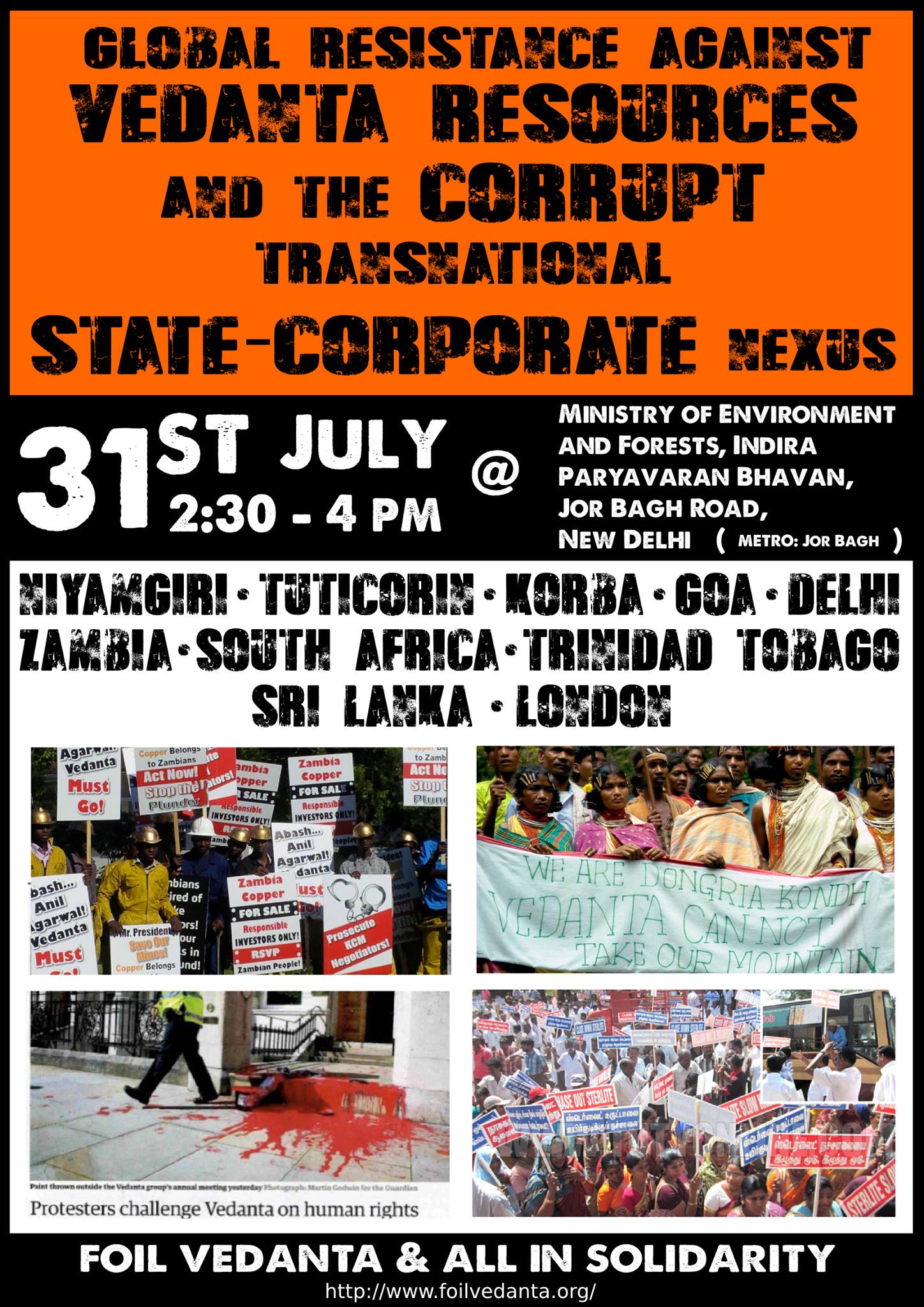 Join the protest from 2pm onwards outside the Lincoln Centre

NO MORE BLOOD, NO MORE LOOT, NO MORE ECO-CIDE!

This protest on 31st July in Delhi will coincide with demonstrations in Niyamgiri, Tuticorin, Goa, Lusaka & Andola (Zambia), Johannesburg (South Africa) and Port of Spain (Trinidad & Tobago) to mark THE GLOBAL DAY OF ACTION AGAINST VEDANTA in lead up to the company’s Annual General Meeting (AGM) in London on 1st August. These protests are organised under the banner of FOIL VEDANTA (http://www.foilvedanta.org/) whose pioneering work is spearheading international action against Vedanta. Details of the London protest can be found herehttp://www.foilvedanta.org/news/protest-call-out-join-us-at-vedantas-agm-friday-1st-august/

STAND IN OPPOSITION TO THE CORRUPT GLOBAL CORPORATE STATE NEXUS THAT DEFENDS VEDANTA AND OTHER RUTHLESS COMPANIES LIKE IT! Vedanta has been aggressively acquiring new businesses with support from Indian and UK politicians to help cover its losses in Niyamgiri – including HZL in India and formerly Scottish company Cairn with oil operations in Rajasthan and the Gulf of Mannar, Sri Lanka.

STAND IN SOLIDARITY WITH ZAMBIAN WORKERS AND COMMUNITIES AND OPPOSE INDIAN NEO-COLONIALISM IN AFRIKA! Vedanta has been ripping off Zambians by reporting losses from the KCM copper mine it bought from the government at a throw-away price, while it’s actually been making profits to the tune of US$500 million to US$1 billion and selling copper at below market rates to its own hidden subsidiary in Dubai. It has also failed to pay a fine for offloading toxic waste into local waterways resulting in 7 years of birth defects in local communities.

OPPOSE RUTHLESS ANTI-WORKER BEHAVIOUR! Vedanta treats its workers like shit! A chimney in its BALCO plant in Korba killed at least 40 workers when it collapsed due to negligence and cost-cutting. 750 striking miners in Zambia have been thrown out of the KCM factory. Workers in .

STAND IN DEFENCE OF THE ONLY PLANET WE HAVE AND THE LIFE IT SUSTAINS! Vedanta has no respect for the environment. It pays companies to produce fake EIAs, dumps all kinds of toxic waste into pristine waterways, flouts environmental regulations and refuses to pay fines for the damages it causes.

DEMAND VEDANTA TO KEEP ITS HANDS OFF NIYAMGIRI NOW! Vedanta still has Niyamgiri in its sights and militarisation is rampant with harassment of the Dongria Khond and those supporting them. Vedanta plans to expand its Lanjigarh refinery 6 fold and has claimed that it will be sourcing aluminum from just 3.5km away.

OPPOSE THE ILLEGAL PRO-CORPORATE ANTI-PEOPLE VEDANTA-STATE NEXUS! Vedanta has been a major funder of the BJP in its election campaign and the lawyer who defended Vedanta in the Supreme Court has been made the Attorney General by the Modi regime. Before this Vedanta was funding Congress. Foreign funding of political parties is illegal. This has to be seen in light of the new regimes push to weaken the forest rights act and make land acquisition easier.

OPPOSE MODI’S POLICIES! DEVELOPMENT FOR WHOM? WHOSE GROWTH? This protest will take place outside MoEF due to the ministry’s recent statements about removing ‘obstructions’ to foreign investment and diluting the Forest Rights Act. The FRA was a crucial factor in the victory of the Dongria Kond. Similarly, MoRD have made statements about changing ‘consent’ clauses in the Land Acquisition Act and the Finance Ministry seeks to disinvest its minority shares in BALCO and Hindustan Zinc.

DEMAND DE-LISTING OF VEDANTA FROM THE LONDON STOCK EXCHANGE! Vedanta has benefited from support from crony UK politicians who facilitated its acquisition of formerly Scottish company Cairn India to cover its losses in Niyamgiri. Vedanta is listed on the London Stock Exchange but its rampant malpractices mean that it does not deserve to be there. De-listing it will damage Vedanta’s credit rating, making it harder to pull cash in to fuel its ruthless destruction.

For more details on Vedanta and this transnational state corporate nexus, kindly refer to the attachment below and Foil Vedanta’s website http://www.foilvedanta.org/

VEDANTA IS DESPERATE!
Vedanta Resources Plc is best known for its illegal mining activities in Niyamgiri, Orissa and the
struggle of the Dongria Khond to protect their forest against this proposed mining. Last year saw
the victory of the Dongria Khond as the Supreme Court judged against Vedanta’s illegal mining
operations. Vedanta subsidiary in Goa, Sesa Sterlite’s operations were also stopped by the Supreme
Court after it emerged that they had exported 150 million tonnes of iron-ore in 2010-11, while
declaring only 7.6 million, their agreed export allowance. Vedanta also lost its prestigious status as
an FTSE Top 100 London Stock Exchange listed company, as its ranking was downgraded. This has
put Vedanta in a tight spot as it has been struggling to repay the loans it took for the same. Vedanta
has thus, been busy finding desperate ways of covering its losses. As expected, it has been doing
this by crooked means and by pulling strings in the corridors of power. This has included its
acquisition of Scottish corporation Cairn’s oil operations in Rajasthan and the Gulf of Mannar
in Sri Lanka and its buyout of Hindusthan Zinc Limited – both well below their real value. Cairn
India has also recently lent 1.25 billion$ to British parent company Vedanta for refinancing its own
debt, which is a clear violation of existing corporate governance regulations.
VEDANTA IS LOOTING AFRICA! COLONISATION – BRIC-STYLE
Zambian workers and communities resist!
A major breakthrough arose this year when a leaked video of Anil Agarwal confirmed from the
horse’s mouth what FOIL VEDANTA’S work in Zambia had already revealed. Vedanta was
illegally making millions from its Konkola Copper Mines (KCM) in Zambia, which it bought
from the Zambian government – again, well below its value. It has been reporting losses yet making
profits of the tune of US$500 million to $1billion and has been selling the copper below market
rates to its own subsidiary in Dubai, run by Anil Aggarwal’s son. The news of this tax evasion and
transfer mispricing has been hotly debated in the Zambian parliament and there is a vibrant
movement on the ground including workers and communities suffering for years from Vedanta’s
toxic waste.
VEDANTA IS COMMITING ECO-CIDE!
Environment is not an ‘obstruction’
Vedanta is notorious for continuously flouting environmental and pollution control state
mechanisms, even when they are barely there. Vedanta’s proposed mining in the Niyamgiri
mountains would have been a complete ecological genocide if the resistance of the Dongria Kond
against it had not been so relentlessly strong. The existing refinery in Lanjigarh has polluted water
sources and destroyed surrounding agricultural lands. KCM’s major pollution spill into River Kafue
in 2006 poisoned thousands of people, causing on-going birth deformities. The company refused to
pay the $2million fine that was imposed on them. Similar stories abound in all Vedanta operations –
be it the massively polluting lethal leaks in the copper smelter in Tuticorin or the dubious and nontransparent
off-shore drilling activities in the highly militarised Gulf of Mannar in Sri Lanka.
THE ABYSMAL CONDITIONS OF VEDANTA WORKERS!
The struggle is on!
Workers operate under the abysmal, exploitative and precarious conditions of employment in
Vedanta factories and operations. More than 2000 contractual workers in Vedanta BALCO’s
aluminimum manufacturing company in Korba district, Chattisgarh protested earlier this year
demanding better working conditions. It is in the same factory where a chimney had collapsed in
2009 and there were over a hundred unaccountable deaths. In Zambia, continues the struggle of 750
ex-KCM miners who have been thrown out of their jobs by Vedanta. In Vedanta’s lethal gas
smelters in Tuticorin, there has been the death of 3 workers and several injured due to lethal gas
leaks.
VEDANTA, HANDS OFF NIYAMGIRI, NOW!!
Dongoro Choribo Nai!
Meanwhile, the situation in Niyamgiri is troubling with increased militarisation and harrassment
of the Dongria Kond. Vedanta still has its sights set on acquiring the bauxite in Niyamgiri and has
planned a 6 fold expansion of its refinery in Lanjigarh. The notice for the public meeting they will
hold on 30th July’14 claims that bauxite will be sourced 3.5 km from the refinery – intimating that
they have not given up on mining the Niyamgiri Hills. Under the new regime it is quite easy to
imagine the hard-won success in Niyamgiri being reversed as there are hundreds of billions of
dollars sitting in those hills.
VEDANTA’S MOST TRUSTED ALLIES?
Vedanta-BJP-Congress Bhai Bhai!
It is well known that Vedanta has been a major funder of the BJP government (and the Congress
before it) and thus the planned revisions of the Forest Rights Act (a major contributor to the
Dongria Khond’s success in Niyamgiri) and the Land Acquisition Act by the new Government is not
surprising. The Ministry of Environment and Forests under the new regime is keen to aggressively
accelerate trends which were already existent during Congress rule. The state has been immensely
pro-active in employing its machineries of repression through the police and the military in
responding to resistance against Vedanta.
LONDON’S IMPERIAL ‘SECRETS’!
De-list Vedanta from London Stock Exchange!
Evidence of Vedanta’s corruption has been made available and was presented by Foil Vedanta in the
UK Parliament (House of Commons) on 21st July’14. The UK’s government’s role in assisting
and protecting this contentious mining company has been crucial including the role of the
Department for International Development (DfID)’s CDC (formerly the Commonwealth
Development Corporation) in supporting Vedanta’s Zambian mine, and former British High
Commissioner to India Sir David Gore Booth’s assistance, as a co-opted board member in
launching the company on the London Stock Exchange in 2003.

David Cameron personally exerted
pressure on the Indian government to sell lucrative oil company Cairn India to Vedanta in 2011. The
London Stock Exchange’s faulty listing and accountability has allowed companies lie Vedanta to
flourish by making London a tax haven and engaging in practices of tax evasion and insider-trading,
and blatantly violating human rights and environmental regulations across the world.
The elaboration above of Vedanta’s illegal and exploitative operations, is however,
barely an exception. Vedanta, is but a case study of what are established norms for
multinational corporations in the capitalist order of our times.