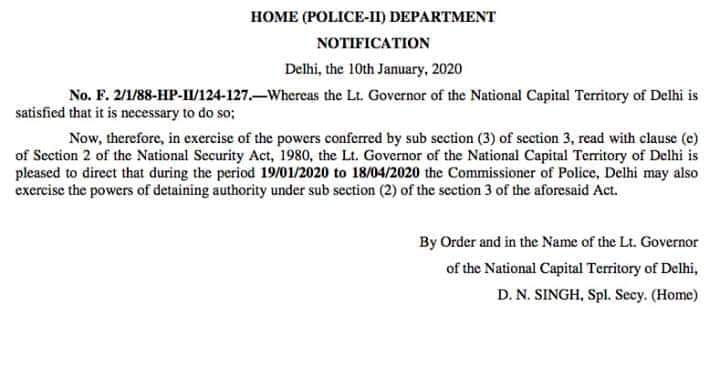 The draconian National Security Act will be operational in Delhi from 19th January to 18th April. There is nothing ‘routine’ about it.

Lieutenant Governor Anil Baijal has granted power of detaining authority to the Delhi Police Commissioner under the National Security Act, according to a notification.

The NSA allows preventive detention of an individual for months if the authorities feel that the individual is a threat to the national security, and law and order, sources said.

In exercise of the powers conferred by sub-section (3) of section 3, read with clause (c) of Section 2 of the National Security Act, 1980, the Lt Governor pleased to direct that during the period January 19 to April 18, the Delhi Police Commissioner may also exercise the powers of detaining authority under sub-section (2) of the section 3 of the aforesaid Act, the notification stated.

The notification has been issued on January 10 following the approval of the LG.

The Commissioner of Police, Delhi shall have the power to detain anyone without charges for 12 months. The detained person will not be told the reason even for the first 10 days. He or she cannot access a lawyer.

The actor-activist Sadaf Jafar, who was filming stone pelters, out to create anarchy in a #CAA_NRC protest, is detained for being a part of the stone pelters!

She is taken to Hazratganj Police Station. Detention under the Police for a few hours after a protest is common in UP. We have all gone through it; there are seldom any beatings. In fact, it is a formality, where you are released after signing a bond. You don’t pay anything.

At Hazratganj Police Station, Sadaf is slapped by a junior female police officer. Then a senior male Police officer slaps and kicks her stomach. She is not given medical attention. She starts bleeding. Her pants are soaked. No Sanitary napkins. Next day, Deepak, her friend, goes to Hazratganj to enquire about her. He is beaten and stripped BEFORE HER. We know what happened to Robin Verma.

From the Police Station, Sadaf is sent to jail. There, many more boys are stripped before her. The Police keeps calling them Pakistanis, ‘Tum Log’, ‘Yahan Ka Khaate Ho’, etc. The entire scene sounds like a nightmare.

Sadaf is part of Lucknow’s civil society. She is a liberal and has never been identified as a Muslim activist.

Beating up Sadaf is not a result of stray elements gone rogue. Who touches someone like Sadaf? Imagine Kanak Rekha Chauhan or Madhavi Kuckreja or Ajaish Jaiswal being dragged to the Hazratganj Police Station and thrashed publicly!

That day is not far off. Manjari Chaturvedi’s Sufi Qawwali WAS STOPPED YESTERDAY in Lucknow! They shouted ‘Qawwali Nahee Chalegi’.

The Police touched Sadaf to send a message. Hindu-Muslim is just a front. Is Manjari Chaturvedi a Muslim? Why was her qawwali stopped?

Through Sadaf, the State wants to say that it hates Lucknow civil society and the culture of programs it launches regularly: no more Kabir festivals, NO MORE SANATKADAS, NO MORE LITERARY FESTIVALS, ORGANISED BY KANAK–all of these, in view of UP BJP-Ajay Singh Bisht dispensation, are ‘indulgences of liberals’ and have no place in Lucknow.

The word TEHZEEB ITSELF IS AN ANATHEMA TO THE DISPENSATION.

MODI HAS INDICATED IN A TWEET THAT ‘BRUTE FORCE’ WILL BE USED. Delhi Police is constantly issuing warnings to Shaheen Bagh protesters.

AAP is deliberately distancing itself from pro-CAA protests, so that it can avoid the crackdown. But it will not. Amit Shah has already mentioned AAP, alongwith Left and Congress, as Pakistanis and threat to the nation.

The past few days, in which we saw Goondas, lumpens and RSS activists, dressed as Police, attacking people, was a dress rehearsal. Sadaf too, was attacked initially, by Police uniforms with no badges.

The other model is, at happened in JNU, masked goons attacking protesters.

So, here is the warning: A MAJOR FASCIST CRACKDOWN IN DELHI IS IN THE OFFING, ANYTIME BEFORE OR AFTER REPUBLIC DAY…

WOMEN, IN PARTICULAR WOMEN, WILL BE ATTACKED MERCILESSLY.

MANY UNSPEAKABLE THINGS ARE GOING TO HAPPEN…