Delhi riots chargesheet invents conspiracy and enemy, as per script 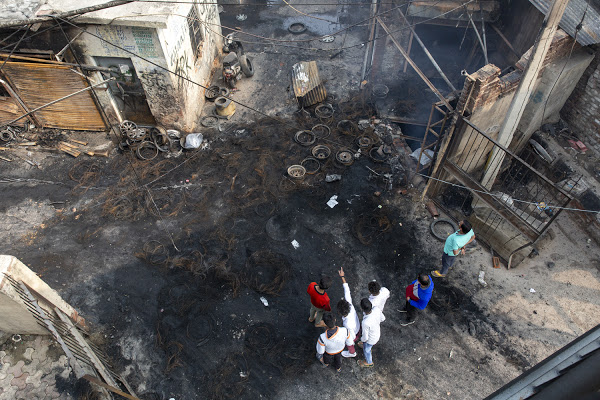 New DelhiYoung boys from the area look at the remains after a fire at a local tyre and car parts market in Gokulpuri in North East Delhi. The shops which were mostly owned by Muslims were burnt in the early hours of 25 February by rioting mobs of Hindu groups.

Those who really incite roam free. But all of us who saw the Constitution as a site of hope are potential terrorists now.

Delhi’s Police’s investigation against students and activists in connection with the Delhi riots is pushing the Indian state into a long dark night of tyranny. The riots are a serious matter. All perpetrators must be credibly identified and subject to the law. But instead, we are witnessing a project designed to crush civil society. If our freedom is to be saved, we need to understand what is at stake in what is happening in Delhi.

Normally, in a society constituted by the rule of law, we should let the investigation run its course before pronouncing judgment. But we are living in a world where the state, in partnership with the media, does not subscribe to this restraint. In case after case, it runs nightly media trials, destroying people’s lives and reputations. The state uses investigations, leaked evidence, chargesheets as pretexts for establishing narrative dominance and to intimidate. It is not interested in guilt or innocence. It is interested in demonstrating that it can destroy your life with impunity.

It can declare you a terrorist, it can declare you a drug lord, and it can charge you under UAPA. In the Delhi chargesheets, dozens and dozens of students and distinguished academics are facing exactly this prospect. “The law will take its own course”, the state wants to say. But, in the meanwhile, let us show you what we can do to you. How we can make an example of you so other intellectuals dare not speak. The law should take its own course when the state is interested in law. But when the state is using law as an instrument of ideological and physical intimidation, the phrase “let the law take its own course” becomes a cover to subvert our constitutional values.

What does the pattern of filing chargesheets suggest? It is following a script. The whole purpose is to argue that there is a liberal, left, Islamist conspiracy to embarrass and subvert the Indian state. The political class repeats this, the media parrots this and the police, as if on cue, frames the issues this way. The idea is not just to deflect attention from violence and discrimination, it is to declare any critic of the government a potential subversive. It is to invent an enemy of the people, in students and intellectuals. The state has diabolically shifted the emphasis away from investigation of the riots to delegitimising the anti-CAA protest.

The Indian police has, in the past, a patchy record in riot investigations. Just think of 1984. But there is something distinctive about the current conjuncture. Usually, the police botch up investigations to protect powerful perpetrators. This was often the pattern during Congress times. Sometimes there is pressure to produce results. In the process, the police can sometimes round up some usual suspects. But what is happening in Delhi is of a different order. It is the use of police to round up or send signals to critics of the government. It is an ideological witch hunt. This is being done by erasing the distinction between ideological positions and conspirators. The general trend now seems to be that mere thought, or a speech advocating a position, can make you part of a conspiracy to incite. This modus operandi was perfected in the Bhima Koregaon cases. There also the focus became not on the event, but targeting alleged ideological foes like Anand Teltumbde or Sudha Bharadwaj.

The second is to erase the distinction between legitimate protest and conspiracy against the state. Any democratic society allows for peaceful protest. You can also, at the margins, disagree about particular tactics. But the act of organising and coordinating a protest does not amount to subversion of the state. In the Delhi case, democratic protest is being deliberately confused with riots and subversion of the state. Organising a protest is being confused with organising a riot. Third, there is a novel theory of instigation at work. If you strongly argue that a particular policy was a subversion of constitutional values, and some incident carried out by someone else follows, you are responsible. But if ministers and politicians instigate a chorus of “goli maaro saalon ko” it is some kind of allegorical defence of the rule of law. The definition of incitement is partisan beyond belief.

If you read the alleged confessions of students and unidentified witnesses, it will remind you more of Mao’s China than a democratic republic. There is pressure on students to name and denounce their supposed ideological inspiration so that it can be presented to the world that the violence was the product of an ideological cabal. It is to deflect attention from the direct incitement provided by several BJP politicians. Think of the appalling human costs. Dozens of young people, whose politics you may not agree with, but whose only crime was to believe that this country could be better and risk something for that belief, will now be charged as if they were terrorists. It does not matter whether it is Sharjeel Imam or Umar Khalid or Devangana Kalita. It is a trap to think about the differences between them at this point, when the state has declared that thought is a crime, protest is subversion. The point is to send every young person a message: Choose between democratic protest, thinking or your life. The message is chilling.

Opinion | Under PM Modi, India is no country for appeasement and victim card politics anymore

I happened to be reading Professor Apoorvanand’s incandescently brilliant forthcoming book on Prem Chand, a deep meditation on the meaning of being human, when I heard he has been named in the chargesheet. He is one of India’s finest scholars of literature. He has been associated with the Left, but is a deeply Gandhian figure. His politics has been devoted to the pacification of violence. He also has a kind of absolute unconditional concern for others that Gandhi demonstrated. In a climate where even decent liberals run away from Muslim political figures, contortedly trying to find the right kind of Muslim to assuage their conscience, he openly embraced Umar Khalid as someone who was like his son. His concern for students is exemplary.

The idea that he can be interrogated by Delhi Police, named in a riots chargesheet and the shadow of UAPA hangs over him (like many others) should disconcert you. It should disconcert you that Kapil Mishra can tweet “In Delhi Umar Khalid, Tahir Hussain, Khalid Saifi, Safoora Zargar, Apoorvanand type people planned and murdered. They engaged in a 26/11 type terrorist attack. These terrorists, killers, should be hanged. Congratulations to Delhi Police.” Whose script is being followed? And congratulations indeed, Delhi police. Those who really incite roam free. But all of us who saw the Constitution as a site of hope are potential terrorists now.