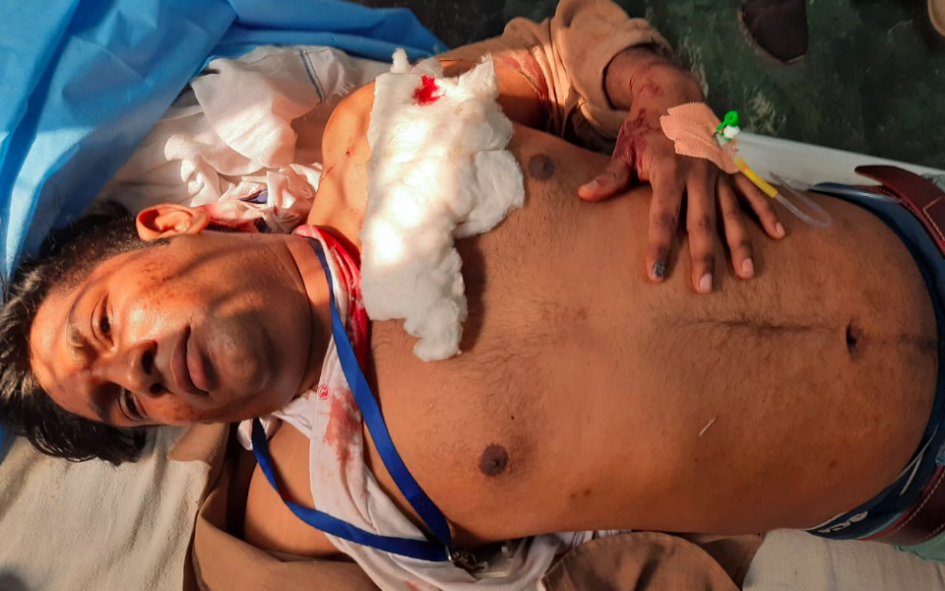 Journalist Akash, after he was shot at. Photo: Twitter/@sarkarshanta

While more than 150 have been injured in the riots, most reporters on the ground have gruesome stories of intimidation and attacks to recount.

New Delhi: New Delhi: A journalist was reportedly shot at and hospitalised during the violence over the Citizenship Amendment Act (CAA) in northeast Delhi on Tuesday. Several other journalists, including three reporters and a cameraperson of a news channel, were assaulted by mobs.

Three journalists from The Times of India were surrounded by a mob and heckled. One of them sustained a leg injury, while another was threatened with violence and asked to prove he was uncircumcised.

Journalists from other publications were also attacked. This included either snatching their phones and deleting the photographs and videos they took of the site of violence.

A woman journalist said she was surrounded by a mob and her phone was snatched at a market in Maujpur, as rioters suspected her to be sent by Muslims. “I was speaking to some people who had gathered at Maujpur Chowk and then I went to the nearby market to click pictures of vandalised shops. Suddenly, I was surrounded by a mob, heckled and forced to hand over my phones. They reformatted my phones and I lost all my data,” she said. Her phone was returned after a police official intervened.

One of the local women was following this woman reporter, who finally got her phones back after a police official intervened.

“Don’t take out your phone or notepad. If you want to click photographs do it slyly. If you do it in front of them, they will turn aggressive,” fellow reporters advised this correspondent.

This was probably a reason why television reporters faced a hard time on the ground. Several TV journalists were either threatened or attacked. But amid the mayhem, this correspondent was lucky and was helped by locals in hiding during the chase by the police to disperse the crowd and in finding a route to out of the area.

The Press Club of India and Indian Women’s Press Corps express serious concern that journalists on duty have come under attack while covering the communal violence rocking northeast Delhi since last Sunday.

Several of them have been hospitalized. They have been punched and attacked by communal mobs, and police were either absent or have not come to help. Shockingly, mobs were checking religious credentials of journalists.
A television journalist has sustained gunshot injuries. Another has been hit in the face and has several teeth missing. A woman journalist has also sustained injuries. Television media seem to have been specially targeted.We have little doubt the attackers actively sought to prevent videography or photography that may lead to them being identified.

A lethargic police and politicians instigating communal violence cannot escape blame for attacks on the media.

The Brihanmumbai Union of Journalists (BUJ) condemns the targeting and religious profiling of journalists covering the violence in Delhi on Feb 23-24, 2020. According to reports by journalists covering the clashes, the mobs tried to mark some journalists with ‘tikkas’ and sought to ‘verify’ which religion the journalist belonged to. This sickening intimidation is a despicable attempt to undermine the media’s right to cover the protests over the passage of the Citizenship Amendment Act without fear or favour.

The BUJ demands that the Delhi police take strict action against the culprits and ensure that the media pursue their duties to record and report unhampered.

The BUJ is also distressed to note that some journalists have transgressed basic professional ethics and openly advocated violence against protestors. This is shocking and reprehensible. Such so-called journalists are a blot on the profession and, apart from misusing the responsibility and position they have been given, seriously endanger the lives of those journalists who sincerely fulfill their duties towards society. The BUJ calls upon these elements to rein in their biased and inflammatory comments and demands that their coverage uphold the highest standards of fairness and accuracy in journalism.

Australians Will Not Allow the Adani Project to Go Ahead
Where do Adivasis / Tribals stand in Indian law?
Open letter - Dear Pahlaj Nihalani, You Were Clearly Born Out Of Photosynthesis, Not Intercourse!
#India - Demolition double standard: If slums go, why not Campa Cola?