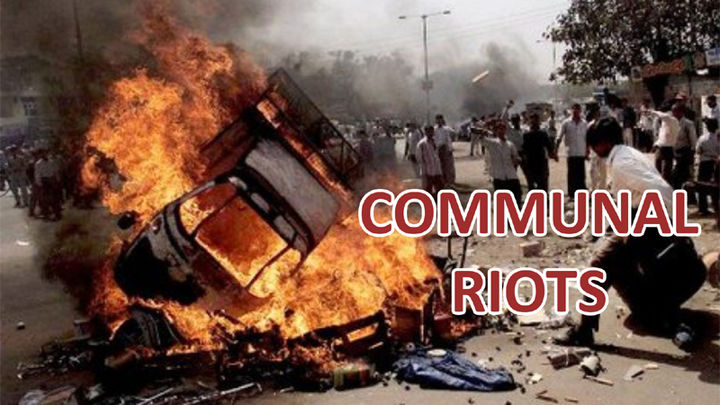 Perhaps, it’s possible, the boy from Gali Anarkali, was up to no good. Then again, perhaps Vishwakarma, their neighbour from Gali Milwali, was just imagining that Nasim Ahmed — ‘Babbu’ to his friends, had been eyeing up his sisters. Either way, Ibrahim Ismail, there with his family that evening, stepped in to stop the escalating brawl — and then, everyone waiting for the 9 pm movie at Palace Talkies, the pride of Mohalla Kishanganj, turned away and forgot about the unscheduled pre-show entertainment.

Except, the fight-sequence hadn’t quite ended.

Security personnel conduct a flag march during clashes between those against and those supporting the CAA in north east Delhi on Tuesday. PTI

The next morning, Nasim showed up with a street posse at the home of a friend of Vishwakarma, demanding an apology. The friend, Khalil Ahmed, failed to extract one, and a battle erupted on the street.

Within hours, home-made bombs were being thrown from the roofs of the Imliwali mosque, and snipers opened fire from inside homes along Bahadurgarh Road and Fhoota Road.

Eleven people were killed — eight Hindus, two Muslims, one Sikh — before the Delhi communal riot of May, 1974, ended. Precisely why did the people decide to kill each other, multiple police investigations and a high-level government inquiry could not establish.

This week, as Delhi struggles with the fallout from weekend violence which ended in a temple in the city’s Chawri Bazaar area being vandalised, the 1974 riots — one of the deadliest Hindu-Muslim clashes in post-Independence Delhi — are a useful prism to inspect what happened, and why.  Ever since Prime Minister Narendra Modi’s rise to power, there’s been growing, global concern about the apparently-inexorable rise in communal violence across India. The Delhi riot tells us the story isn’t about Prime Minister Modi — nor as simple as the headlines might lead us to believe.

Exactly what led up to the weekend’s violence in Delhi isn’t clear, just as in 1974. Late on Sunday night, local shopkeeper Harish Gupta objected to the resident of an adjoining lane, parking his scooter on the street. His ego bruised, 20-year-old Aas Muhammad departed with the scooter only to return later with a group of friends — friends who, by the account of Gupta’s wife Babita, were “probably drunk.”

The sequence of events in the ensuing fight isn’t exactly clear. What is evident is that stones were thrown at the idols in a small Durga temple by the attackers. Even though religious slogans were shouted, local police believe that the motives of the attackers might not have been entirely holy: cash offerings lay in the glass cases which housed the idols; at least two of the suspected attackers, police sources say, were known drug abusers.

Within hours of the attack on the Durga temple, it has been amplified for use in a wider communal narrative. In the Hindu-nationalist telling of events, a mob of several hundred attacked the temple — something the damage doesn’t bear out. In the version favoured by Islam’s defenders in the area, Aas Muhammad — or someone else — was beaten by a mob, which forced him to chant Jai Shree Ram.

Like the stories of couples trapped in bad relationships, the odds are high that neither version of events closely resembles reality — but that isn’t the point. The Delhi riots should be an opportunity to reflect on the dysfunctional lenses that colour how different religious communities perceive the same set of events differently.

From interviews conducted by the Centre for the Study of Developing Societies in the wake of the 1974 riots, it’s clear that Delhi’s Hindus despised Muslims long before Hindutva became a  feature of our political landscape. Hindus believed Muslims were “poor”, “backward in education”, “religious fanatics”, and “quarrelsome and harsh”. Some other perceptions quoted in the report include that Muslims “marry several times” and “do not regard the country as their own.”

Islam’s followers didn’t have a high opinion of their neighbours, either: Hindus were considered to harbour “enmity for Muslims”, and “dislike for Kashmiris.” They thought Hindus “worship money”, “don’t consider Harijans human”,  “drink alcohol, gamble, and are womanisers.”

For the most part of the city’s history, a kind of apartheid was in place — much like today. Three out of every ten Hindu and almost two out of ten Muslims, the study found, never even met with members of the other religious community in any social context — political, casual, or even business.

Even though the savageries of Partition mark a kind of high-point in communal warfare, a low-grade battle of attrition has characterised Delhi’s Hindu-Muslim relationship. In 1924, disputes over a slaughterhouse left 15 Hindus and a Muslim dead; in 1926, more violence followed — and after Independence, things haven’t been very different either.

Enmeshed in that evil September of 1948, when the epic slaughter of Partition reached its climax, Shahid Ahmed Dehlavi left Khari Baoli, up the road from the site of this weekend’s events, for Pakistan. Even his mother, determined not to leave her homeland, was taken to the safety of the nearby, Muslim-dominated Farash Khana. Then, something unusual happened: the Hindus of Khari Baoli demanded the elderly lady return, insisting that her departure was a stain on their honour.

“Not a single Muslim was killed in Khari Baoli,” Dehlavi wrote in his 1950 memoir, Dilli ka Bipta, “and my mother is still there. She writes to us saying that all of us fled unnecessarily.”  For many old-Delhi residents, tolerance and syncretism are distinguishing features of the city.  Pre-Partition Delhi residents blame much of the violence of the time on “outsiders” — refugees from Punjab, and looters from the city’s peripheries.

Even in 1947-1948, Dehlavi’s experience wasn’t typical. The massacre was commonplace, often carried out by armed gangs reported to be linked to Hindu-nationalist organisations.  The city newspaper News Chronicle described how Muslim school-students in Karol Bagh were assembled outside the examination hall, and slaughtered one by one.

At the end of 1947, scholar Gyanendra Pandey’s magisterial work on Partition violence in Delhi records, less than 150,000 of the city’s estimated 500,000 Muslims were thought to have remained in the city — and the killing, at that time, was far from done.

Fractures between Hindus and Muslims can’t just be attributed to Partition, either. The work of scholars like CA Bayly has shown that religious violence was endemic in pre-colonial India too. Bayly notes that “several riots broke out in Delhi, Agra and Kashmir during the early 1720s”, sparked off by “disputes over Holi, Muhurram and Eid.”

Likewise, Ahmedabad saw large-scale rioting over cow-slaughter, and “Afghan soldiers of the Mughal governor of the city took a leading part in the attack on the Hindu quarters of the city.”

Hate politics in India long preceded the brutal killings that have become an everyday part of newspaper front-pages since 2014.  Figures gathered by IndiaSpend show that there has been no significant variation in communal violence, measured by either fatalities or incidents, under Prime Minister Narendra Modi’s first four years in office.  In some states, like Maharashtra, communal killings have actually been in decline.

For Muslims — or anyone else genuinely concerned about India’s future — there is of course little consolation in these numbers. The extensive research of Violette Graff and Juliette Galonnier shows that Muslims have made up the overwhelming majority of victims of communal violence — violence that has often been abetted by the political system and police. The brutal truth is that Gujarat in 2002 was not the exception, but the well-established norm.

The truth that Delhi’s many riots tell is a grim one: Independent India, despite its stated commitment to secularism, has failed to engender a culture that would give this word meaning.

For centuries, religious hatreds have influenced the course and character of our civilisation. Hate is bred in our homes, our workplaces, our streets; it feeds on our festivals and lives in our streets. Put simply, it is the culture that envelops and shapes us all.