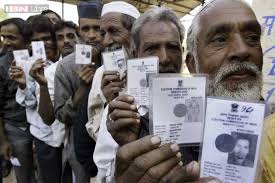 As Delhi goes to polls this 7th February, we appeal to all democratic minded, secular citizens to cast their vote decisively against anti-poor and communal forces.

The BJP’s poll promise – during the Lok Sabha elections – of retrieving black money and distributing Rs 15 lakhs to all has been exposed to be a cheap publicity stunt. A slew of ordinances (land, coal, mining etc.) and labour and environmental rules have diluted mechanisms meant to protect tribals, land and environment facilitating massive transfer of natural resources and offering sops to corporate houses. Welfarist schemes like MNERGA are being starved of funds and shrunk in size and spread and public sector industries are being divested and privatised. After a 20 per cent cut, our health budget this time is among the lowest in the world, leaving the poorest vulnerable to disease and death.

The inauguration of the new government at the Centre has seen a relentless and corrosive hate campaign: love jihad, ghar wapsi, attacks on churches. Not a day has passed when the storm troopers of the party in power have not attempted to stoke hatred and violence. Public and political discourse has been vitiated beyond recognition. Venomous speeches by members of parliament and leaders – and not some ‘fringe elements’ – have called the bluff of the so-called development plank.  RSS Chief declared India to be a Hindu nation, and as if on cue, everyone from Sakshi Maharaj to Sadhvi Prachi exhorted Hindu women to produce more and more children.

In fact, the Hindutva plank, is being stoked up time and again only to promote the corporate agenda, and using the Hate politics to divert people’s attention from Important issues, and during this time, enforcing draconian ordinances that curtail democratic freedom like the Land Acquisition ordinances. In Delhi itself, we have witnessed communal violence and simmering tensions in Bawana and Trilokpuri; Churches have been vandalized perhaps for the first time in the city’s history.

Even in so vitiated an atmosphere, citizens were stunned to see the government advertisements on Republic Day omitting the words “Secular” and “Socialist” from the Preamble of our Constitution.  Brazen defence of the advertisement by invoking the ‘original Preamble’ soon degenerated into a call for debate on these words by none other than a Union Minister, while the Shiv Sena called for permanent expunging of secularism and socialism.  The BJP government may have retreated for now, but we have certainly got a glimpse into its agenda of tampering with the core values of our Constitution and polity.

Nonetheless, defeat is staring stark in BJP’s face. Money or chopper rallies cannot compensate for its obvious loss of imagination.

Make your vote the final push.

Vote for a government that will enable everyone to participate as equal citizens.

Vote for peace and communal harmony, vote for an inclusive India.

Reject those who treat women as child producing factories.

Vote for the most formidable party which can defeat the politics of hate, market reforms and VIP culture.

Adani halts coal works in approvals challenge
Chandigarh - Abortion services denied if you do not have Aadhaar #Vaw
India - How The Adivasi Goes To Vote ?
Indian-American Organizations Demand US Ambassador Resign for RSS Meet