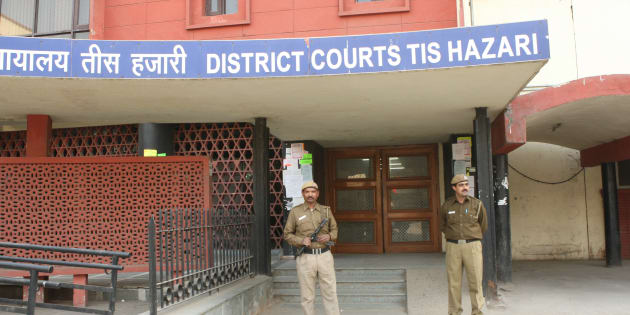 NEW DELHI – Her clients were already in the courthouse, the judge was waiting; but when Afshan Pracha, a 35-year-old lawyer arrived at the Tis Hazari courts in West Delhi, she was allegedly abused, groped, dragged by her hair, and pushed down a flight of stairs by a mob of male lawyers from the Tis Hazari Bar Association.

The bar association filed a police complaint against her, alleging she tried to snatch a gold chain and cash from the junior associate of the secretary of the Bar Association, Jaiveer Singh Chauhan – one of the men she said assaulted her.

The trigger for this inexplicable violence, Pracha said, was that she sought to enter court on a day that the bar association had called for a strike over the allotment of lawyers’ chambers.

“I told them I will simply go inside, inform the judge that I cannot appear, speak to my clients and leave,” Pracha said. “These men keep doing things like this with impunity. They have attacked several women in the past.”

“The FIR filed by that woman is false, there was no attack on her. Women lawyers don’t face any problems here.”

This isn’t the first time a women lawyer has complained of harassment at the hands of her male counterparts in Delhi’s courtrooms. As more and more women speak out against sexual harassment at the workplace, several women lawyers HuffPost India spoke to said courtrooms remain bastions of male privilege, intimidation, and even outright violent assault.

Several women lawyers told HuffPost that harassment, abuse, were part of the perils of practicing law at the city’s courthouses. Most sought anonymity, fearing that speaking out would result in reprisals from their male colleagues.

“We feel so insecure in district courts in general after sundown,” Pracha said. “They turn into open bars and it’s really unsafe.”

“These lawyers are not scared of anything. Absolutely nothing,” said Liyi Marli Noshi, a young lawyer from Arunachal Pradesh who was attacked in the same courthouse in 2015.

Senior advocate Rebecca John said there is a clear pattern to incidents of violence against the women.

“These were all cases of women defying arbitrary diktats set by men. How dare they, right?” John said, explaining that this sense of male entitlement, especially in trial courts, comes from the lack of opportunities for women.

“As newcomers, you have to first work in chambers of senior lawyers. In trial courts, almost all the prominent, powerful lawyers are men.” said John. “That’s where the vulnerability starts.”

John said things had improved in the 30 years that she had been practicing law, but women lawyers who exclusively practice in lower courts of the country have it especially rough.

In the hierarchies of men, zealously protected to this day, John said, “It is very easy to treat women as inconsequential.”

When Avni Bansal began practicing in a trial court in Harda, Madhya Pradesh in 2013, after getting her law degree at Oxford, she found her male counterparts frequently sought to belittle her.

“There would be snide remarks about my clothing or the fact that I studied abroad, made by male lawyers,” Bansal said. “There were also suggestions that I didn’t know how things worked on the ground.” John has similar memories of toxic masculinity she faced as a young lawyer, during her stint with trial courts. “I spent days listening to this abusive language. It was not essentially directed at me, but that’s how male lawyers generally spoke to each other irrespective of who they were around,” she said.

Bansal said it was common for male lawyers to point at women lawyers “character” during court proceedings and accuse judges of being partial to women.

The lack of representation of women in elected bodies of lawyers makes it easy for sections of men in the profession to exert undue influence over the day to day functioning of the courts, like it was witnessed in Tis Hazari.

The top posts of the Delhi Bar Council are held by men, as are the posts at Tis Hazari. One of the lawyers who assaulted her, Pracha alleged, is Jaiveer Singh Chauhan – the Delhi Bar Association’s secretary.

“The FIR filed by that woman is false, there was no attack on her,” said Naresh Chand Gupta, the President of Tis Hazar’s bar association. “Women lawyers don’t face any problems here.”

Jaiveer Chauhan, the bar secretary, echoed his president, claiming that Pracha’s complaint was part of a larger political conspiracy agains the Chief Justice of India.

Yet Pracha is not the first woman to be harassed in Tis Hazaari.

In May in 2015, lawyer Dharitry Phookan received a call from a North-Eastern students’ association. A Naga girl had allegedly been molested by a lawyer, but she was now being prevented from appearing in Tis Hazari court by members of the bar association.

Phookan, who’s from Assam, rushed to the court only to encounter a shocking sight. Scores of male lawyers had blocked the girl’s way and were shouting insults at the victim and her friends.

“A mob of lawyers had gathered to support the molester. Friends of the lawyer then started pushing the students and then some of them started slapping the male students accompanying the victim. They were hurling unspeakable invectives at the women and pushing and shoving them,” Phookan said.

A report published on The Indian Express at that time carried the picture of Mavio Woba, a student activist whose face was bruised all over with red welts and cuts.

Phookan called up her juniors – three women and a man – all of who were lawyers hailing for various parts of North East India. Liyi Marli Noshi was one of them.

Eventually the police had to escort Phookan and the victim to a courtroom, and eventually helped them escape unnoticed through a back entrance.

But Noshi, Phookan’s junior, was physically attacked by a large group of lawyers.

“They will not be able to intimidate me, they can try. They have a whole gang of lawyers backing them, but I will not back down.”

“They descended on these women in hordes hurling abuses at them, calling them ‘chinki’ etc,” Phookan recounted. One of them, Phookan said, also slapped Noshi. As a horde of lawyers chased them, the women had to run for their lives and hid inside a police van.

Chauhan, who had initially said that no woman has ever been attacked in the court premises, admitted that he was aware of the incident. “Action was taken against him,” Chauhan said. He mentioned a single accused being referred to the bar council but added, “I don’t know what happened finally. It was not the secretary then.”

A group of women lawyers led by Indira Jaising approached the Delhi High Court and chief justice of the court, G Rohini for action. However, nothing came out of it.

“It was shocking,” said Phookan.

They then filed a contempt petition, demanding the court take action against the violent male lawyers for interfering with and disrupting the process of justice.

Days after Pracha filed her complaint, the Chief Justice of India issued an order asking High Courts to make sure that all trial courts comply to Vishakha guidelines immediately and set up sexual harassment complaint committees within two months.

But few expect these guidelines to be implemented in Tis Hazari, where even women judges aren’t safe.

In 2004, Sujata Kohli, a judge at Tis Hazari, complained that a group of mostly male lawyers, barged into her courtroom, and abused and threatened her when she refused to stop working and participate in a strike called by them.

The then secretary of the bar association told her, “Naukri Karni Hai, Ki Nahi (do you want to keep your job or not?)”, according to a petition filed in the Supreme Court by Kohli.

Kohli approached the High Court as well, but ­– like Noshi, the lawyer – got no relief. Instead, the lawyers, Kohli said, boycotted her court, and filed a complaint against her conduct.

But Pracha, the lawyer assaulted in May this year, is standing firm.

“They will not be able to intimidate me, they can try,” she said. “They have a whole gang of lawyers backing them, but I will not back down.”

Sex Workers #StandWithJNU , demand Azaadi from Goddess Durga
#India - Villagers speak- The Maoists Support Us, But We Haven’t Joined Them’
Wake UP- Destruction of mangroves causes damages of up to $42 billion each year
Grave concerns over security laws in Kashmir