Why does the government brutally silence local dissent and turns the public hearings invariably into cruel jokes, when it is so sure about the shining claims of nuclear energy? If it is the safest technology and the best solution for the people’s progress, why is their constitutionally mandated participation in the decision-making process denied so violently?

After travelling more than 1000kms, hundreds of adivasis from Chutka reached Delhi today and registered their protest at jantar Mantar, the designated spot in the capital of democratic India for expressing dissent.  On their way to Delhi, they also staged a protest in Bhopal, the state capital of Madhya Pradesh in central India. These people have not chosen such hard struggle, being anti-nuclear is  not an ideological choice for them. They have stood in opposition because a nuclear power park has been thrust on them against their will, threatening their lives and livelihoods. In Chutka, the govt owned Nuclear Power Corporation of India Limited (NPCIL) is building 2 Pressurised Heavy Water Reactors(PHWRs) of 700 MW each. 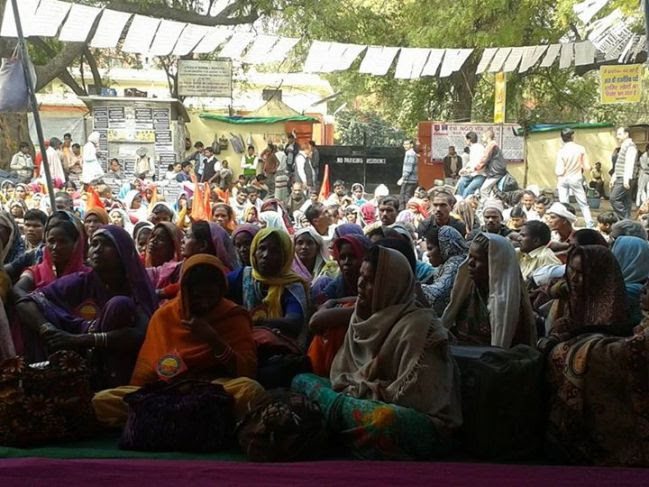 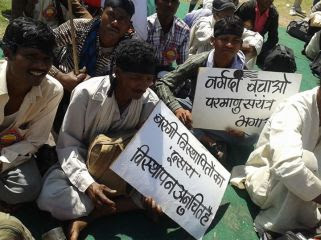 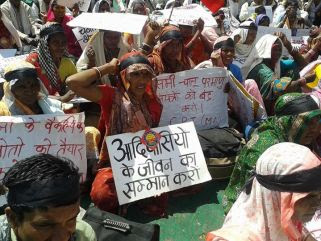 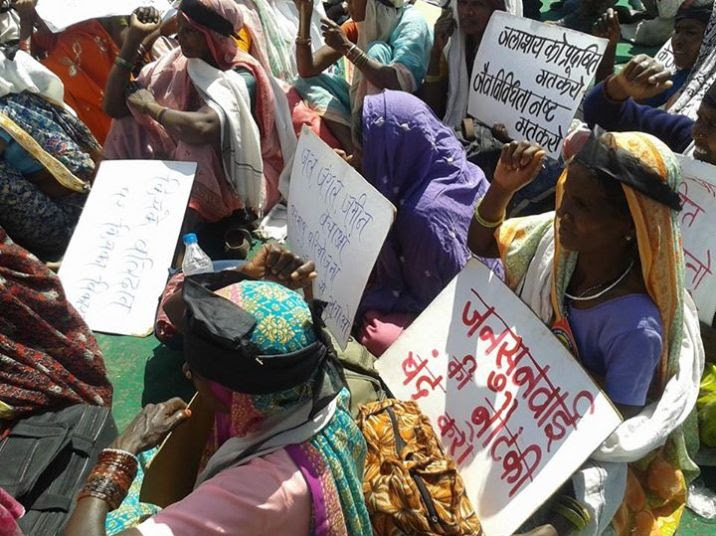 While the opposition for the reactor locally has stemmed from justified livelihood questions and the wider circle of activists and citizens have also joined them on the larger issues of nuclear safety and transparency and accountability of the nuclear establishment in India, it is the farcical public hearing that happened on February 17th that forced the Chutka adivasis to come up to Delhi this time. A public hearing is a constitutionally mandated procedure for taking people’s consent for the Environmental Impact Assessment(EIA) report, supposed to be prepared by an professional and independent organisation with proper accreditation. The EIA report is supposed to be given to the people in the area one month in advance, translated in their own language. The proceedings have to be duly recorded and the local people’s opinion has to be respected, as per the law. But on the ground, these hearings have turned out to be a complete farce played by the local administration, hand-in-gloves with the nuclear operator. Be it Jaitapur, Gorakhpur or Mithivirdi, we have witnessed a series of such public hearings where all the above norms are openly flouted and the local officials orchestrate a farce, often aided with heavy deployment of police to keep the real stake-holders at bay.

From a local Hindi newspaper: public hearing in Chutka at the gunpoint

In Chutka last month, the public hearing was conducted with 200 odd chosen people while more than 8,000 people were stopped from entering the official venue and they staged a sit-in protest a few hundred meters away. This was the administration’s third attempt to orchestrate such farce. Fierce local protest against the non-adherence of the procedures by the officials had thwarted two such exercises last year. But this time, the government deployed at least 10,000 para-military personnel to intimidate and isolate the villagers. After the project was announced, some 160 people from the nearby city and towns, most of whom are govt officials or contractors, have bought small pieces of land in the area to become stake-holders and ease the consent taking. While all of them jointly hold not more than 10-15 acres of the land, the protesting villagers own most of the land which which will be acquired for the project. Members of the Chutka Parmanu Sangharsh Samiti, the local forum spearheading the protests, claim that these people suddenly got interested in buying land in the hope that their better educated children will be compensated with jobs once the reactor comes up. Most of the tribal people in the area find no attraction in the promise of jobs as their children have little hope for better education, advanced enough to get jobs in the nuclear power plant. Buying of tribal land by non-tribal is blatantly illegal anyways.

Such brazen bulldozing of basic democratic norms is a obvious casualty for the Indian elite’s anachronistic obsession for nuclear energy, at a time when the entire world is moving away from nuclear technology and embracing sustainable sources of energy production. The current massive nuclear expansion of India has not stemmed from any rational cost-benefit analysis of India’s energy needs, rather a very abrupt concoction of myths of inevitability of nuclear technology for the country’s energy future, in order to justify the nuclear agreements with the US, France, Russia and other several countries which were done without any competitive bidding or techno-economic assessment, on the eve of Nuclear Suppliers’ Group meeting in 2008 to get exemption from its rules.

The existing process of Environmental Impact Assessment for nuclear projects by non-accredited bodies is unacceptable. So is the non-consideration of specific nuclear hazards, including radiation leaks, radioactive waste storage, transportation risks, accidents, etc. Environmental clearances to all nuclear projects must be tightened with mandatory public hearings and full disclosure of all pertinent facts, including those related to the generic problems of nuclear power generation – radiation, effluents and emissions, requirements and availability of resources such as freshwater, impact on forests, fauna and flora and local eco-systems, potential for accidents and mishaps, waste separation, storage and disposal, hazards from transportation of nuclear materials, and risks to public and planned measures to mitigate these. The definition of potentially affected population by nuclear mishaps must be severely revised in the light of the catastrophic accidents like Chernobyl and Fukushima.

Activists from Fatehabad, near the proposed Gorakhpur nuclear power plant in the neighbouring state of Haryana, also came to Delhi to express their solidarity with the Chutka villagers’ protest today. However, the political establishment of the country isn’t moved by such voices. At the beginning of this year, the Prime Minister claimed his nuclear policy to be the greatest achievement of his 10-year long regime and vouched that historians would assess him greatly. Apart from historians, the physicians who will deal with the disasters unleashed by these power plants being set up in complete disregard for procedures and safety norms, and the coming generations of the tribal population who are facing displacement and dispossession will also assess the PM in their own ways.