Denial of History- Facts be damned !

‘Politicians have always dealt in lies and propaganda.’
‘But the scale of the propaganda and the impunity with which it is being unleashed now is stunning,’ says Shuma Raha.
Illustration: Uttam Ghosh/Rediff.com 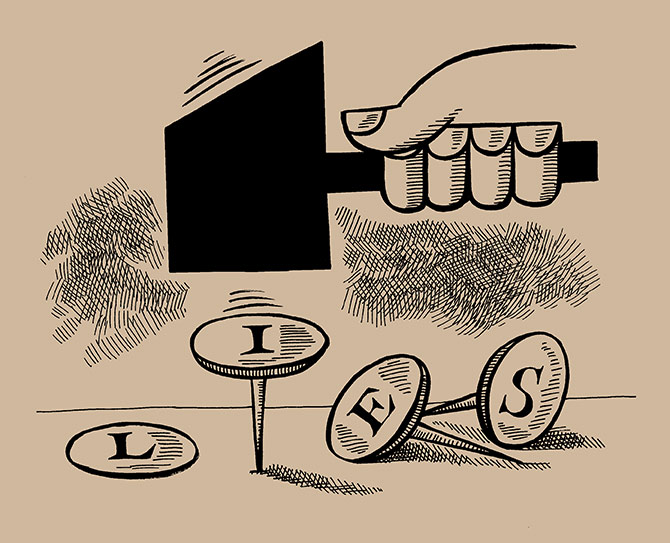 When Winston Churchill wrote the six-volume History of the Second World War, published between 1948 and 1954, he was probably playing out a saying which is often attributed to him — ‘History is written by the victors.’ He got the Nobel Prize in literature for that work.

And for many years, it was unquestioningly accepted as the most definitive history of World War II, one where Churchill, Britain’s great wartime prime minister, played a pivotal role.

If there were inaccuracies and facts glossed over, it was not until decades later that researchers began to point them out.

Britain and its allies had won the war and Churchill’s narrative was a winsome affirmation of that.

But Churchill is so last century. He merely tweaked a few facts here and there.

Look at the powers-that-be in India today — they are far more intrepid, far more insouciant in their attempts to deliver the history of their choice.

Facts and historical evidence be damned.

The latest effort in this regard is almost farcical in its audaciousness.

According to a report in The Indian Express, Rajasthan is considering rewriting history text books at the university level because it wants to depict Rana Pratap, the heroic Rajput king of Mewar, as having won the battle of Haldighati against the forces of Mughal emperor Akbar.

This is pure fiction, of course.

Historical records are unambiguous: Rana Pratap, who refused to submit to Akbar, lost the battle of Haldighati in 1576 at the hands of the Mughal army led by another Rajput royal, Man Singh.

Even the most exaggerated legends about Rana Pratap’s valour do not narrate a victory for him in this battle.

Evidently, the BJP government of Rajasthan doesn’t let such minor inconveniences as facts come in the way of its grand purpose of glorifying its cultural icons.

Evidently, it is not enough to celebrate Rana Pratap as a hero — he must be recast as a victor, a Hindu king who vanquished a Muslim ruler.

He must be redrawn to fit the narrative of right-wing nationalism, which wants to overturn the fact that at a certain period in history a large part of the landmass that became ‘India’ was ruled by Muslims.

But why blame the Rajasthan government for its brazen attempt to stand history on its head?

After all, an imaginative retelling of past events has become the hallmark of our post-truth world.

US President Donald Trump’s advisor Kellyanne Conway described as ‘alternative facts’ the White House’s assertion that the crowds at his inauguration were the biggest ever. (They were not).

Recently, she referred to a terror attack at Bowling Green, Kentucky, that never happened. Mr Trump himself is famous for his disregard for truth.

Our very own finance minister, Arun Jaitley, said recently that there was no shortage of cash at any point in the aftermath of the currency ban.

What about those who spent hours — and the 100-odd people who died — queuing up before banks and ATMs to withdraw some cash?

The minister did not go there, but they were clearly inhabiting an ‘alternative’ universe.

Of course, politicians have always dealt in lies and propaganda. But the scale of the propaganda and the impunity with which it is being unleashed now is stunning.

Today, whoever commands the bully pulpit gets the biggest shot at manipulating facts and megaphoning them until the lies settle in as the truth.

But to be fair to the Rajasthan government, it has been in the business of distorting history long before such phrases as ‘post-truth’ and ‘alternative facts’ became fashionable.

Last year, social science text books for Class VIII students of schools under the Rajasthan board of secondary education omitted references to Jawaharlal Nehru’s contribution to the freedom struggle and his role as India’s first prime minister after Independence.

The Rashtriya Swayamsevak Sangh, the BJP’s ideological fountainhead, makes no secret of its antipathy towards Nehru — the secular, liberal leader who was the architect of modern India.

Moreover, the remaking of history has long been part of the RSS’ nationalist agenda, which wants to indoctrinate the youth in the idea of India as a glorious monolithic culture.

A culture that is perhaps more rooted in myths than facts.

A culture that believes that our legends are sacrosanct and anyone who dares to deviate from them runs the risk of getting thrashed.

As filmmaker Sanjay Leela Bhansali was recently because it was rumoured that he planned to shoot a love scene between Rani Padmini of Chittor and Sultan Alauddin Khilji in his film Padmavati.

No doubt the Rajasthan government’s latest stab at altering history will evoke the usual hand-wringing by left liberals. It will give rise to the usual cry that education is being ‘saffronised.’

But I am optimistic. India is too vast and too diverse for a sweeping overhaul of its history.

Its youth are too invested in the future to worry too much about the past.

The denial of history — getting a kick out of portraying a Rana Pratap as a winner or a Nehru as a non-entity — will always be the preoccupation of sad old ideologues and their followers on the fringe.