Large scale violence broke out in parts of Haryana and Punjab soon after a CBI court in Panchkula convicted Dera Sacha Sauda chief Gurmeet Ram Rahim Singh of rape. Over 30 people had been killed in Haryana in the violence at the time of writing this story.

The BJP government in Haryana stands accused of gross administrative failure. On the eve of the verdict, it allowed lakhs of Dera supporters, or Premis as they are called, to gather at Panchkula. Dera supporters also mobilised themselves at Sirsa, the Dera’s bastion.

The administrative failure of the Manohar Lal Khattar government stems from its political compulsions. The BJP in Haryana enjoys close ties with Dera Sacha Sauda and this seems to have impaired it from cracking down on Dera goons on time.

Nothing embodies this failure more than Haryana education minister Ram Bilas Sharma’s comment that the Section 144 imposed in Panchkula “did not apply to Dera supporters”.

He even went to the extent of defending the people who had gathered at Panchkula. He reportedlydescribed the Dera supporters as “simple, peace-loving people” who wouldn’t “harm even a plant”.

Sharma’s links with the Dera are well known. He is reported to have recently donated Rs 51 lakh to the Dera as a mark of his support for the cult.

But it isn’t just Sharma. A number of leaders in the Haryana BJP have deep ties with the Dera and this close relationship has the blessings of the party’s top leadership

The other major backer of Ram Rahim in the Haryana BJP is health minister Anil Vij. Vij donatedRs 50 lakh from Haryana government funds to the Dera’s sports project.

Another minister, Manish Grover, who holds the portfolios of printing, stationery and urban local bodies, also donated Rs 11 lakh to the Dera from his discretionary fund.

The support for the Dera extended even to the Central government, with Union minister for sports Vijay Goel also promising to support the Dera with Central funds.

Between the three BJP leaders – Sharma, Vij and Grover – the Dera was given over Rs 1 crore. This is despite the fact that even at the time of the donations, Ram Rahim faced charges of rape and murder.

What is even more sinister is that the BJP’s Central leadership – Prime Minister Narendra Modi as well as BJP president Amit Shah – were active participants in this cosy relationship of the party with Dera.

During the campaign for the Haryana Assembly elections in 2014, PM Modi reportedly showered praise on the rape-accused godman while addressing a rally in Sirsa. Apparently, this was the first time that a major political leader had openly invoked the Dera during an election campaign. The Congress and Akali Dal leaders, who often sought support of the Dera in the past, made it a point not to publically name the Dera or its controversial chief.

On the other hand, the 2014 Haryana election was also the first time when Dera Ram Rahim chief openly voiced his preference for a political party – the BJP. Before this, Ram Rahim’s diktat to vote for one party or the other was communicated through more secretive ways to his followers, mostly through the political wing of the Dera.

According to a report, the deal with Ram Rahim was sealed by none other than BJP president Amit Shah. The report said that Shah met Ram Rahim in the first week of October and “sought his blessings” for the Assembly elections in Haryana and Maharashtra. The report said that six days after the meeting with Shah, BJP general secretary Kailash Vijayvargiya took 44 BJP candidates for the Haryana polls to meet the Dera chief. Apparently, Ram Rahim showered his blessings on the BJP candidates during the meeting. 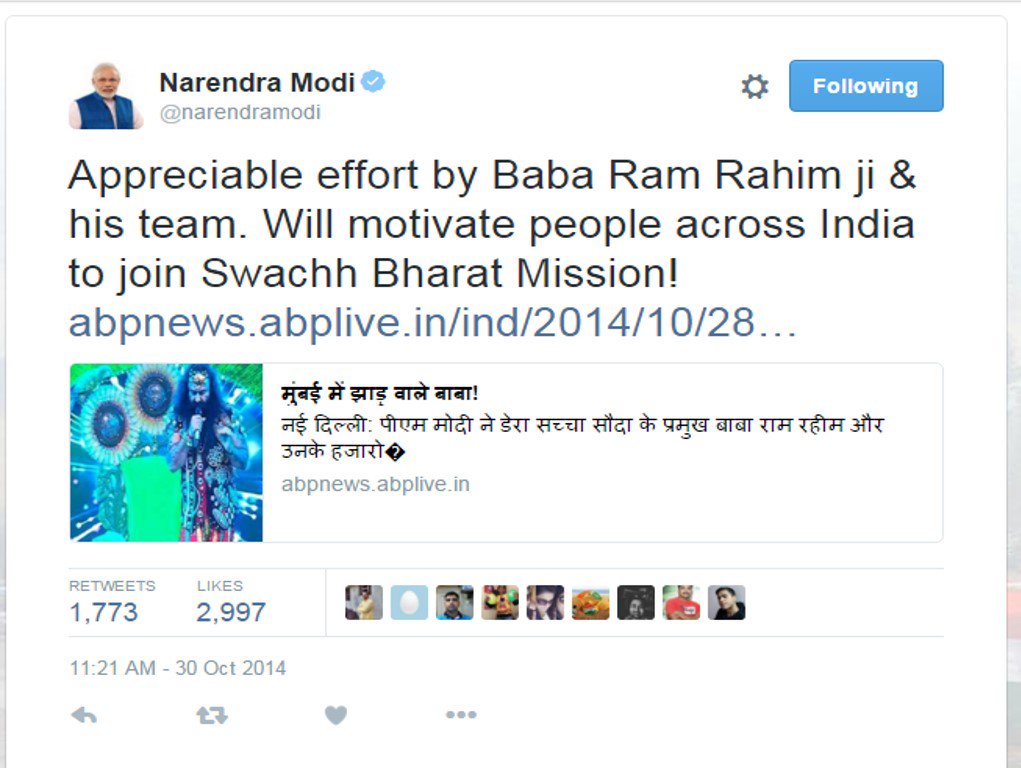 BJP insiders say that Ram Rahim is a valuable political ally for the party, as he commands the loyalty of over 1 crore followers across the country, particularly in Haryana and Punjab.

“Dera commands a large voter base of over a crore, with a large percentage of Dalits. They vote en bloc. BJP leaders have been in regular touch with Ram Rahim and expected him to play a major role in bringing votes the party’s way in Haryana and Punjab in the 2019 Lok Sabha elections,” a senior BJP leader told Catch on the condition of anonymity.

The leader admitted that the Khattar government had no choice but to go soft on the Dera supporters and let them have their way.

“Dera followers are not small in number, in fact they are huge. We have to move very, very cautiously. Patience is the need of the hour. A wrong move and things can go out of control. We have already seen that in the 2016 Jat agitation,” the leader said.

DERA AND THE RSS GAMEPLAN

For the BJP, the Dera’s significance isn’t just related to elections. It is said to occupy a key place in the broader gameplan of the BJP’s parent organisation – the Rashtriya Swayamsevak Sangh.

“Sangh’s aims are not always associated with the BJP. The BJP is focused on elections, Sangh works for society. Sangh has been cultivating various Deras – Radha Soami Satsang, Dera Sacha Sauda etc – for some years now,” a Sangh functionary based in Amritsar had told Catch during the Punjab elections earlier this year.

“The Deras work with the Dalit community, particularly Dalit Sikhs, who are ill-treated by Panthic Sikhs. The Deras help in bringing them back into the Hindu fold,” the functionary added.

The functionary was extremely categorical in saying that the interests of the Sangh were at odds with Panthic politics. “They (Panthic Sikhs) emphasise on the minority nature of Sikhs. We don’t see them in that way. Often even mainstream Sikh leaders take radical positions or appease radical elements. The Deras can help us counter this,” he added.

Apparently to pursue this agenda, RSS Sarsanghchalak Mohan Bhagwat spent some time at Mansa in South Punjab in 2014. During his visit, he reportedly met the head of the Radhasoami sect Baba Gurinder Singh Dhillon.

The Dera Sacha Sauda has its roots in the Radha Soami sect. Its founder Khema Mal aka Balochistani Shah Mastana, was a disciple of Baba Sawan Singh of the Radhasoami lineage.

It is clear that in Punjab’s socio-political landscape, RSS and the Deras are on the same side. Even Panthic outfits, mainstream as well as radical ones, realise that such an alliance has taken place.

According to Punjab police, the same radical group is said to have been behind the killings of RSS leader Jagdish Gagneja last year and Dera Sacha Sauda supporters earlier this year.

The violence by Dera supporters is likely to increase social tensions in Haryana and Punjab. The BJP’s political and financial supporthttp://www.catchnews.com/politics-news/dera-violence-how-bjp-funded-promoted-the-monster-called-ram-rahim-78829.html

NHRC issues notice to the Centre on allegations of illegal clinical trials on 3479 children in Delhi...
Maruti Labour Unrest: SC Sets Aside HC Order to Recall Witnesses
Confusion over #Aadhaar and #NPR #UID #Biometrics
#India - The Aadhaar joke is on us #uid