Desperate to get home, migrants at UP shelters ask ‘Are we criminals? ’ 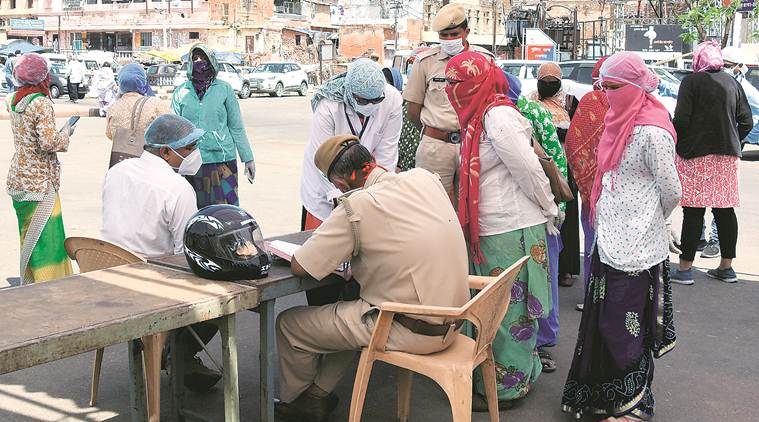 An official says many of those at the shelter were returning from Nepal. With the border near, a lot of men from the region cross over for work.

Nurses and paramedical personnel wait for a briefing on survey routes to detect coronavius cases at a camp at Ramganj Chaupar, Jaipur. (Express photo by Rohit Jain Paras)

The noise comes from behind a shutter on the premises of the Rajkiya Balika Inter College in Gurgutta village, around 50 km from the Bahraich district headquarters. Farmers returning from their fields barely raise their heads to look. From a distance, all that is noticeable of the people behind the shutter, with a big lock outside, are their outstretched hands. And their insistent queries to officials and a lone constable outside, “When will we go home?”

The officials have few answers for the 186 people on the premises — migrant labourers and their families (among them 55 women, 29 children and one infant), belonging to different states, rounded up as they tried to return home from big cities last week, and kept in shelters like this one across Uttar Pradesh. The unofficial date of “release” is April 14; word hasn’t got around that the lockdown may be extended.

Neeraj Kumar, who was brought here by police from the Nepal border, around 20 km away, pulls at the shutter grille as he asks, “Why is the government treating us like criminals?”

The 29-year-old says that his wife is running out of money as she looks after their three children back home in Ayodhya, 150 km away. Once the lockdown ends, he fears, he will have to walk there. “How else will I go when I have no money?”

An official says many of those at the shelter were returning from Nepal. With the border near, a lot of men from the region cross over for work.

Raj Kumar (52), who belongs to a village in Kaushambi, and worked at a brass factory in Banka district of Nepal, says he gets calls every day from his children asking when he would be back. As he slides down next to the shutter, he says, agitated, “Corona se humara kya lena dena? Woh toh ameer logon ki beemari hai aur videsh se aayi hai. Phir hume kyun iss jail mein band kiya gaya hai (What do we have to do with coronavirus? It is a disease of the rich, which has come from abroad. Then why are we being kept in this jail)?”

Balram Yadav, the village lekhpal and one of the caretakers at the shelter, says it has been very difficult for them too. “The migrants make noise all night. They don’t maintain distance from each other and keep banging their utensils,” says Yadav, sitting at a table with an attendance register. “Recently, one of them claimed a ghost had possessed her.”

The meals, including breakfast and evening snacks, are cooked on the school premises. The village head organises the rations from money provided by the administration. Nafees Ahmad Khan, whose wife Rubeena is the village head, says, “We are doing the best we can.”

Yadav says a doctor regularly comes around to check for ailments. “None of them has shown any symptoms so far.”

SDM, Nanpara, Ram Asrey Verma says they have made arrangements to keep the migrants until April 14. “We are awaiting directions from the state government regarding sending them back after that,” he says.

Unlike the Gurgutta shelter, the one at a primary school in Barabanki district’s Harakh town, 140-odd km away, has just one resident. The loneliness is becoming unbearable for Manoj Kumar, picked up on April 4 as he made his way from Meerut, around 600 km away — particularly as home is now just a kilometre away. He covered half the distance on foot, and then hitchhiked.

He has joined several school benches and spread out a thin blanket on them to fashion a makeshift bed. For company, he only has the priest of the Hanuman temple next door, apart from half-an-hour visits by his family every day. Once his food has been sent over by the village head, the priest shouts out and Manoj collects it. “It is tough to stay alone. I don’t even have a smartphone,” says the 25-year-old, who worked as a driver at a sugar mill in Meerut.

ADM (Barabanki) Sandeep Kumar Gupta assures that Manoj can go home after 14 days of quarantine. “That is what the protocol is.”

But Manoj fears his ordeal won’t be over. “I am a Dalit. As it is, we face untouchability. Ab iss beemari ka kalank bhi lag gaya hai (Now, there is also the mark of this disease on me),” he says.

Meanwhile, he hopes the administration would get him checked for coronavirus. “So I can feel reassured.”

Intently watching something on his phone, Sunny says that while the administration is giving them everything, “including electricity to charge mobiles”, they would rather be home in this time of crisis. The 18-year-old, who worked at an iron warehouse in Jaipur, says he is the eldest of three siblings and his family’s main breadwinner.

Sitting on his cot, spread out some 2 metres away from Sunny’s, Shyam Bihari (58) fears that his own teenage sons would find it impossible looking after the family’s wheat crop. His home is in Deoria district, around 220 km away. “I have a bigha of land. My children go to school and don’t have much experience in farming,” Bihari says.

Swami Vivekanand School in Colonelganj town, around 40 km from the Gonda district headquarters, holds 25 people. Naib Tehsildar Vijay Kumar Gupta, the shelter in-charge, says all 25 belong to Aurangabad, Bihar, and were brought by officials from a construction site in Gonda district. “We have arrangements for everything, but they want to go home,” says Gupta.

From the school balcony where he stands, looking at a truck go past on the nearby highway, Braj Nath (35) says it seems like the lockdown is only for the poor. At the shelter with his wife, Nath says, “I see cars moving around, I have heard people with emergencies are travelling. My children are alone in the village and don’t have anything to eat. Is that not an emergency?”