Despite govt claims, migrants continue to be vulnerable and abandoned 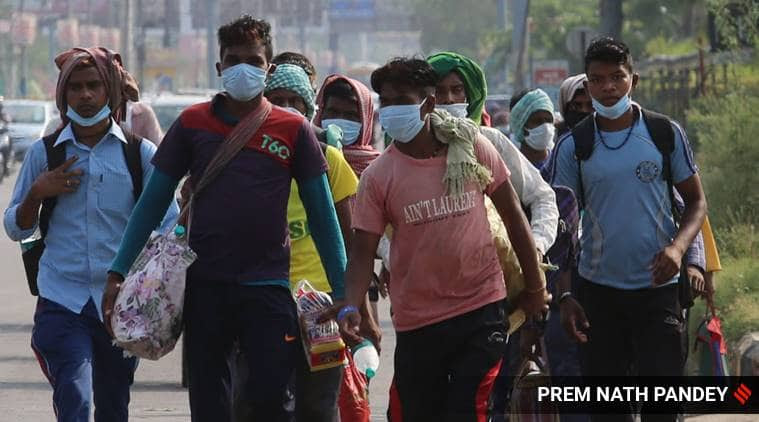 An interaction with around 200 migrant workers from Unnao, Sitapur, Varanasi, Lucknow, Kushinagar and Saharanpur districts in UP, gives a picture very different from what the government has been claiming.

In the wake of migrant workers returning following the lockdown, Uttar Pradesh Chief Minister Yogi Adityanath announced on May 24 that his government will set up of a commission to create employment opportunities in the state. He said the commission will conduct skill mapping of migrant workers and provide them jobs and social security.

An interaction with around 200 migrant workers from Unnao, Sitapur, Varanasi, Lucknow, Kushinagar and Saharanpur districts in UP, gives a picture very different from what the government has been claiming. Not one of the workers surveyed in these districts has been approached by the government for skill mapping or for providing them guidance for any kind of livelihood options in their home state. Only one of them had received monetary support of Rs 1,000 twice, though about half of them were provided with the 35-kg ration kit — benefits promised to all the returning migrant workers. However, the cash benefit could be availed only by those who had used state-owned transport, which was near absent.

Most of the migrant workers had been employed by the construction industry in the National Capital Region, Haryana and Punjab. Some of them worked with plaster of paris and did marble masonry. Some were polishing marble in Telangana. Still others were tailors in Ahmedabad, or worked in hotels in Mumbai. A few had work in factories producing crockery, hosiery and clothes. The farthest anybody worked was in a zarda factory in Karnataka. The few women among the returnees worked as domestic workers or were employed in cloth factories in Ludhiana.

Only less than 10 per cent of them got to travel free by government transport. Most of them spent their own money to travel by various kinds of private vehicles, on buses, auto-rickshaws etc, often changing the vehicle at some place, and even walking part or full distance. For example, when the police would not let their vehicles cross the Delhi-UP border, they would walk up to Ghaziabad or even Aligarh, some along the railway tracks to avoid the police, and then hail a vehicle. Often, they travelled in groups so that costs could be shared. The amount a person spent on travel was upwards of Rs 2,000.

About 10 per cent of them were quarantined — the quarantine centres were mostly neighbourhood schools — for 14 days. Others were told to go home and voluntarily quarantine themselves inside their homes. Relatives of workers quarantined at most centres were asked to arrange food for their quarantined family member.

Three-fourths of these workers are young, below the age of 35 years and close to 70 per cent of them belonged to the Scheduled Castes. Only 13 per cent of the workers were from the general category, indicating that the most underprivileged in the society continues to be from the bottom-most segment of the Hindu caste order.

Most of the workers who have returned, especially those belonging to the SC community, do not own enough land to sustain their families while living in the village. However, they are also aware that in the coming year, and possibly even the next one, there will be no work for them at the places they had left in desperation. Hardly anybody got paid for the period of lockdown, despite the appeal by the prime minister. About 20 per cent of them also have payments worth more than 7.5 lakh in salaries and wages pending for work done earlier. Overall, the workers stare at a bleak future.

Even though the chief minister announced more than once that needy people will get ration even without a ration card, the fact is that the returnee migrant labourers who don’t have ration cards or their names have been struck off from ration cards because they were not staying in their village, are neither getting the regular quota of ration nor the free quota made available during the coronavirus crisis period. Only a little more than 50 per cent of the migrant workers who have returned get their quota of ration. The situation with work under MGNREGA is worse. Less than a third of the people who have returned got work from one to 20 days. But only about a third of them had received payments.

Forgetting that workers have their own agency and rights over their lives, the chief minister had said that if states wanted to re-employ migrant workers they would have to take the UP government’s permission. Prem, a native of Sitapur who had been working with his family of six adults in Ludhiana for the last 12 years, laughed at this statement. He said: “It is not possible to start factories overnight or even in a few months or a year or two in UP. Our entire family works in factories and earns Rs 55,000 a month. Who will give us that sort of skilled work here? When we left we knew only agricultural work but now we know printing and other works. We will go back as there is no choice.”

Dhuru works with the National Alliance of People’s Movements and Pandey, a Magsaysay awardee, is with Socialist Party (India). The writers would like to acknowledge the help of Vishal Kumar, Shivi Piplani and Rakesh in collection, compilation and verification of data.