The CSC e-governance Services India Ltd. tweeted — through its official twitter handle @CSCeGov — a picture in which MS Dhoni’s fingerprints are getting scanned into the system. They went a step forward and tweeted a screenshot of the Jharkhand cricketer’s Aadhaar card application form. Dhoni’s wife Sakshi tweeted to IT minister Ravi Shankar Prasad regarding the event. MS Dhoni gets his fingerprints scanned while applying for Aadhaar Card. The picture was tweeted out by e-governance Services India Ltd. (Twitter.com)

When former India cricket team skipper MS Dhoni decided to get an Aadhaar Card made for himself, the government agency which handles the process couldn’t help but boast about it, landing in trouble.

The CSC e-governance Services India Ltd. tweeted — through its official twitter handle @CSCeGov — a picture in which MS Dhoni’s fingerprints are getting scanned into the system. They went a step forward and tweeted a screenshot of the Jharkhand cricketer’s application form, which Dhoni’s wife Sakshi complained about, tweeting to the Union Law & Justice and Information Technology minister, Ravi Shankar Prasad. 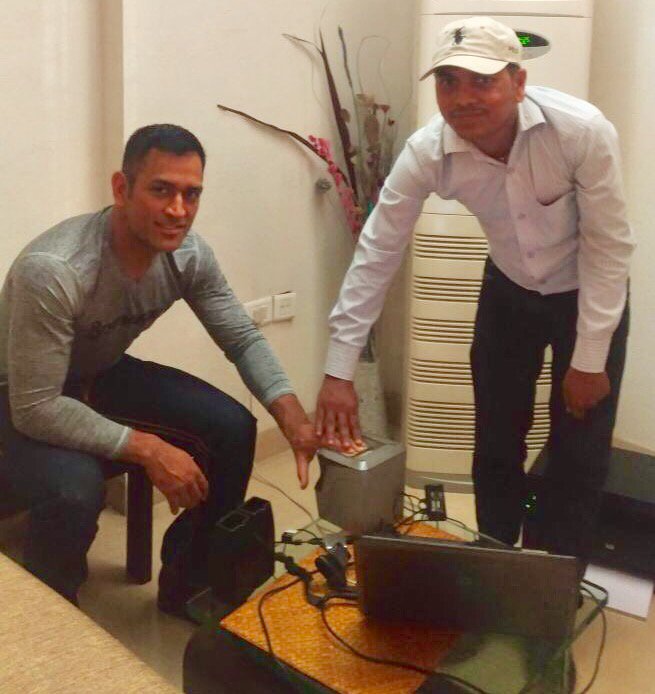 The irony here is that the minister himself was at fault as he too had, hastily, retweeted CSC e-governance Services India Ltd’s tweet.

Not grasping the full gravity of the situation, minister Ravi Shankar Prasad replied to Sakshi Dhoni hinting that nothing was leaked in the tweets, to which she posted the original tweet, marking the screenshot of the application form with an arrow.

While using Dhoni as an ambassador to push the Aadhaar card campaign is not bad, the minister and CSC e-governance Services India Ltd. should have been more careful about what they divulge in their eager tweets.

However, the minister quickly owned up the situation and tweeted that he would get to the bottom of the situation.

“@SaakshiSRawat Thanks for bringing this to my notice. Sharing personal information is illegal. Serious action will be taken against this,” tweeted Ravi Shankar Prasad.

BJP inflaming communal tensions for votes: Moradabad SSP
I grew up in the slums of India. Now I’m a scientist
Tarapur Atomic Power Project Real TRUTH Revealed by Villagers
Half of all US food produce is thrown away #WTFnews