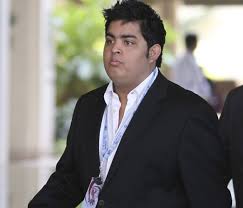 On Thursday, December 12 2013, Jammu & Kashmir Chief Minister Omar Abdullah tweeted, “If friends in Mumbai are to be believed, it seems the only people who don’t know who was driving the fancy Aston Martin are the Mumbai police.” (Read: Akash Ambani, son of Mukesh Ambani)

Probably that’s when the limelight hit the spot. During the wee hours of Sunday, December 8 2013, a black Ashton Martin Rapide (registration # MH 01 BK 99) belonging to Mukesh Ambani’s Reliance Ports, crashed into an Audi and a Hyundai Elantra, at Pedder Road, Mumbai. That’s estimated to be a 4.5 crore rupees worth of (now) scrap metal.

There was NDTV coverage, Bussiness Standard articles and other ambiguous reports which informed about the apparent details of the car crash; More recently, some news pieces have been making rounds on how the Mumbai police was not keen on arresting one of Reliance’s driver, Mr. Bhansilal Joshi – who, as per Reliance, was driving the car at that time.

He wasn’t arrested even after a full confession. Was that because of the tweets and the sarcastic remarks strewn all over the place about how things are being hushed up? (So if we weren’t in the internet era, 55-year-old Bhansilal Joshi would be behind bars by now?)

Some notable points about the case:

Isn’t it our right to know who was behind the wheels of that Aston Martin? Isn’t it the right of the families of those who died in this accident to know who was responsible for the death of their loved ones?

Forget individual rights, is it right of anyone who is trying to put a cover on this incident? And the fact that news outlets have either blocked this story or completely ignored it is truly nauseating.

Let’s not be hypocritical. Let’s not.