Did Cong loosen the CBI case against Modi for Nuclear Bill in 2010?

Nuclear issues have been a wild-card in the Indian politics in the recent years, affecting quite a few unexpected turns. Manmohan Singh who as a Finance Minister discouraged nuclear energy in the early 1990s for economic reasons, found merit in the same for political reason during his bonhomie with George W. Bush’s America.

The former PM got so obsessed with the nuclear deal that he put his government at the stake in 2008, and played a political maverick by shunning the Left allies and wooing the Samajwadi Party. This move surprised even his political mentor Sonia Gandhi as she maintained a distance from the UP satrap ever since Mulayam Singh ridiculing her during the 2004 campaign. 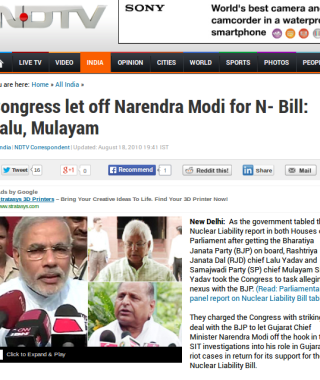 Later, when the Nuclear Liability Bill came to an impasse’ in the parliament, the Congress party again had to make amends with the principal opposition, the BJP. The BJP then was strongly opposed to several provisions of the draft Bill, including the ridiculously low cap on the liability and the attempts to let of the foreign suppliers.  On that occasion, the Congress party allegedly struck a deal with the BJP to loosen the CBI hook on Narendra Modi who was then facing serious charges of abetting communal violence in Gujarat in 2002 and the Shohrabuddin fake encounter case. The allegations about a Cong-BJP deal were leveled by two prominent regional leaders who themselves faced such arm-twisting at several occasions by the Centre using the CBI.

During the whole discussion on the nuclear deal, Modi did not utter a word then. Now it seems to be pay back time for him, with his government’s u-turns on nuclear policy and his nuclear shopping spree. The Modi government is unceremoniously dumping the positions taken by BJP over last 10 years when it was in opposition, be it its reservations on the IAEA protocol, nuclear liability, its demand to review the green clearance for Jaitapur or its support of the issues raised by Koodankulam villagers as genuine and real.

It would not be surprising if Modi uses the nuclear wild-card and allow exemption for the US companies from the Nuclear Liability Act, to enhance his stature with the US and other international powers looking for a pie in India’s nuclear market.

No, neither Afzal Guru is Congress’ son-in-law as Gadkari lambasted nor are minorities as Sudarshan bewailed. The VIP to claim such preference is none other than Narendra Modi who got a clean chit from CBI over Sohrabuddin encounter case as a quid pro quo for BJP’s support to the Congress’ pet project to offer immunity to the American suppliers of useless nuclear technology to India.

Almost all the opposition parties were stunned to see the new duet sung by the duo on the nuclear deal. Both the houses were paralysed when angry RJD and SP members stormed the wells of the two houses. “The Congress and the BJP are one,” accused Mulayam. Lalu declared, “They have struck a deal over the nuclear bill to bail out Modi.” The cordiality of the new “relationship” was seen at Shahnawaz’s iftar party where beaming Congressmen led by the prime minister himself were hugged by jubilant Saffronites.

For the Congress to seek BJP support was a priority. The nuclear bill has to be passed before Obama arrives next November. American firms supplying nuclear reactors will not be responsible for another Bhopal-like disaster. Indian life, we all know, is very cheap. The BJP, on the other hand, had to seek Congress “favour” as exposures involving RSS activists in bomb blasts across the country began upsetting them. The Bellary mining scam had been another thorn in their flesh as BSP and Andhra parties wanted the dismissal of the BJP government in Karnataka. For BJP, it was business as usual. Sushma tried to convince that they had agreed “with our point of view”. Arun Jaitley further said that the seven suggested changes incorporated now have made them join the bandwagon. So, Modi can relax. CBI is no longer “an extended arm of Congress”! The hand is out for Lotus friendship!

India - Growing up stunted
Did the scenario of a working-class woman drinking with a male acquaintance, younger in age, influen...
#India- Your Aadhaar data is being misused by banks #mustshare #privacy #UID
Aruna Roy slams govt for query on ideology #RTI