Disaster airport: Goa’s new runway in Mopa will run the ecology over 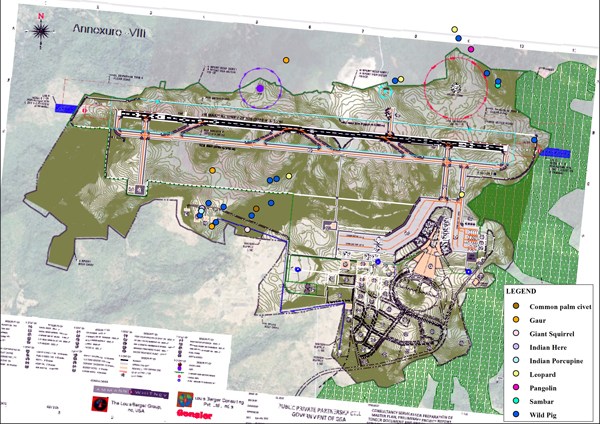 Goa is getting a new airport. It is coming up at Mopa, a small plateau in the state’s northern Pernem taluka. In the pipeline for some 15 years, the airport got a green clearance on 28 October 2015.

While the clearance was still being considered, a group of environmentalists did a month-long study, between December 2014 and January 2015, of the Rs 3,000-crore airport’s proposed location.

This is what they found in the area where the government wants to build an airport serving an estimated 31 million passengers a year.

A satellite view of the Mopa plateau.

It has since emerged, through several such independent studies, that the environmental clearance to the Mopa airport is a joke.

The project threatens several endangered wildlife and plant species, as it does a unique water recharge system that provides for thousands of people as well as countless ecosystems. The plateau is home to hundreds of species of plants and animals.

Green clearances are granted based on a study called the Environment impact assessment. Indeed, it’s the EIA that should do what the environmentalists did in Mopa.

Instead, the EIA for this airport mentions the presence of mice, cats and dogs where, it turns out, leopards and bisons roam.

Catch has written about how EIAs are done by agencies hired by the project’s promoters — a blatant conflict of interest written into the Environment Impact Assessment notification, 2011.

Mopa is probably the best example of how EIAs, and the entire environment clearance process, actively threatens ecological sustainability in this country. In the below blueprint of the proposed airport, coloured dots show spots where wildlife has been sighted. This includes leopards, bisons and pangolins, which are accorded the highest protection under Indian wildlife law. The EIA for the Mopa airport claims that “there are no major wild animals” in the area, and that it does not fall within 10 km of any wildlife corridor or protected area.

One scientist had to walk no more than 500 metres along one of the streams to find signs of the vulnerable Smooth-coated Otters. Atul Borker, a member of the International Union for Conservation of Nature‘s Otter Specialist Group, found that the mammals were staying around not just for the water, they were feasting on crabs and turtles that thrive in the streams.

During another study, Borker, along with wildlife biologist Girish Punjabi, walked about 17 km and found signs of three endangered animals — leopard, gaur and Indian pangolin. All three are accorded the highest protection under Indian the law, that’s Schedule I of Wildlife Protection Act. The pangolin is classified as “critically endangered” by the IUCN.

Yet another group of scientists – ecologist Aparna Watve and wildlife biologist Sanjay Thakur – found the peacock, also a Schedule I bird. A turtle found by activists on the proposed airport site. These are prey for smooth-coated otters, also found on the site.

It turns out, as Watve and Thakur found, that the EIA was done in a single season – winter of 2013 – which is not enough to gauge the full extent of biodiversity. They also point out that the report, bizarrely, mentions sand dune habitats when the site is far away from the coast.

In fact, according to a verdict of the Bombay High Court, forests between Sindhudurg and Dodamarg are a wildlife corridor. This falls well within 10 km of the airport, contrary to what the EIA claims. There have also been several incidents of elephants within a 10 km vicinity of the airport.

In addition to threatening endangered plants and animals, building an airport at Mopa would likely cut off a major source of water to thousands of people. The monsoon rain is soaked by the porous laterite rocks on the plateau, and this water eventually finds its way into springs and as groundwater.

A study by the renowned groundwater expert Himanshu Kulkarni shows that the Mopa plateau is anything but barren land. It recharges over 2 billion litres of water every year. That works out to over 6 million litres per day, nearly as much as a medium-sized dam holds.

In this map, blue dots indicate freshwater springs and blue streaks show the path of streams. It is clear how the airport will choke most of these water sources. This water flows out of perennial springs and into streams. Besides fulfilling local water needs, it supports the rich wildlife and tree cover in the region as well as countless habitations by feeding rivers.

Even though the airport directly blocks several springs — the runway will literally be built over at least three — the clearances allow it to draw water from an irrigation canal, which is fed by the Tillari dam in Maharashtra.

And Tillari has been struggling to provide enough water to households and for irrigating fields in the region. The people displaced by the project have frequently been damaging the canal, demanding that they be properly compensated first.

Sadly enough, as the environmentalists found, the exceptional concentration of life on the small Mopa plateau is because ecosystems elsewhere have been destroyed.

There are four sacred groves on the plateau. And a Buddhist-era cave that ought to be protected as an archaeological monument. Dr Madhav Gadgil during a visit to the plateau.

“The environment clearance is absolutely wrong. The EIA has wrong facts, and there is enough proof for that,” eminent ecologist Madhav Gadgil, who led a panel to examine the eco-sensitivity of the Western Ghats region, told Catch. Gadgil visited the plateau last monsoon on a study tour.

“If you are going to ignore all the evidence and still give an environment clearance then you are clearly being undemocratic,” he said, adding, “Some EIAs are exceptionally bad, the one for Mopa airport is one of them.”

But don’t be surprised that the EIA for the Mopa airport is sub-standard. It was prepared by a public sector firm, Engineers India Limited. The problem isn’t just that it’s controlled by the same government that wanted the airport to be cleared. It’s that EIL’s main business is building oil refineries, and oil and gas processing plants. As such, the firm earns more money destroying nature than evaluating it.

Then again, there is a good reason why there is no point in even discussing the merits of this case: the government had made up its mind to give green clearance to the project even before the expert body recommended its approval.

Eleven days before the clearance was finally granted, environment minister Prakash Javadekar was in Goa to attend a business forum. Speaking to a local newspaper, he did not mince words: “Mopa is essential for the development of Goa and my ministry will always have a positive viewpoint on any development project of a state.” The large amount of water stored by the plateau supports lush green forests and agricultural fields in the vicinity.

Side note: A new legislation being pushed by Javadekar’s ministry would create a new tribunal to hear challenges such clearances instead of the NGT. But this new tribunal would have none of the independence of the NGT as all its members would be government employees.

Letter to CJI from Women's and People's Organizations on 4 Police Encounter Deaths in Hyderabad
Tamil magazine's idea of morality: Shaming women wearing leggings on their cover #WTFnews
Alleged mastermind tells Obama 9/11 was America’s fault
What Is Striking In India Is The Indifference Of The Privileged- #Noamchomsky