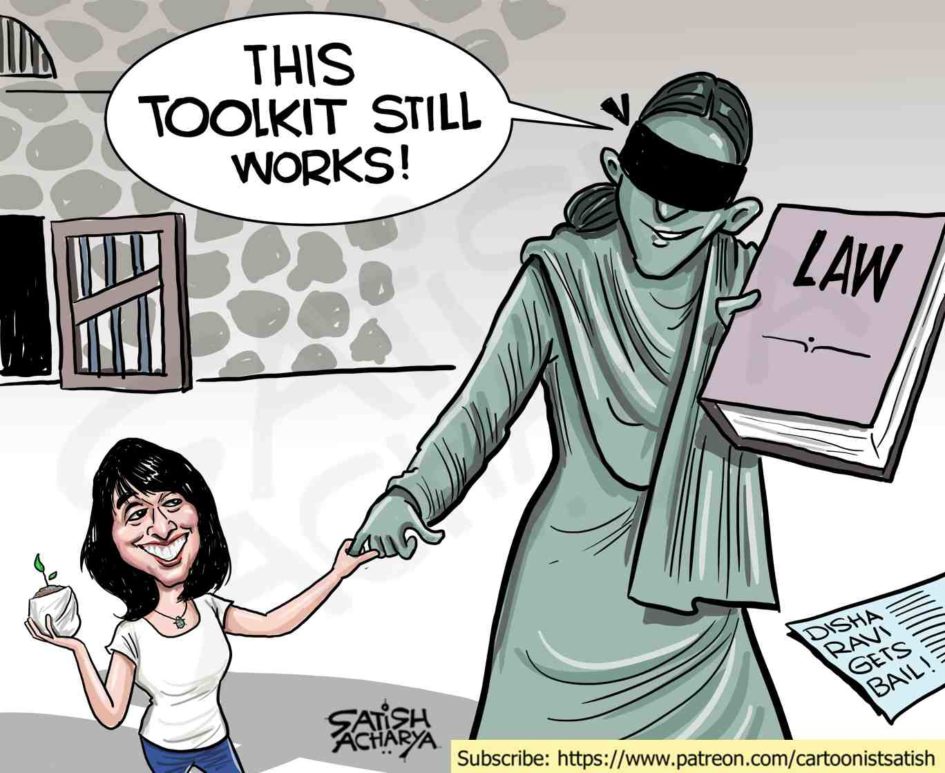 The Delhi Police has accused Disha Ravi and activists Nikita Jacob and Shantanu Muluk of collaborating with the pro-Khalistani group Poetic Justice Foundation for creating the “toolkit” .

Disha Ravi was arrested from her home in Bengaluru last week (File)137New Delhi:

Disha Ravi, the 22-year-old climate activist arrested February 13 in connection with the “toolkit” case and charged with sedition and conspiring against the country, was granted bail by a Delhi court on Tuesday afternoon – subject to provision of two sureties of ₹ 1 lakh each.

“Considering scanty and sketchy evidence on record, I do not find any palpable reason to breach rule of bail for a 22-year-old girl who has absolutely no criminal antecedent,” the judge said, adding , “… sedition cannot be invoked to minister to wounded vanity of the government”.

In his full order Additional Sessions Judge Dharmendra Rana made several strong observations on the right to dissent and freedom of speech and expression.

“Even our founding fathers accorded due respect to divergence of opinion by recognising the freedom of speech and expression as an inviolable fundamental right. The right to dissent is firmly enshrined under Article 19 of The Constitution of India,” Judge Rana said.

He also dismissed Delhi Police claims that Ms Ravi’s sharing of the ‘toolkit’ with teenage Swedish climate activist Greta Thunberg amounted to conspiring against the country.

“A citizen has the fundamental rights to use the best means of imparting and receiving communication, as long as (it) is permissible… to have access to audiences abroad,” he noted.

Judge Rana also dismissed arguments that Ms Ravi had conspired with the Poetic Justice Foundation (PJF) – Delhi Police alleged that several Zoom calls were held by Ms Ravi and Mo Dhaliwal in the days leading up to the Republic Day violence.

“… in the absence of any evidence (that) the accused shared a common purpose to cause violence (on January 26) with the founders of PJF (Poetic Justice Foundation), it cannot be presumed by resorting to surmises or conjectures that she also supported secessionist tendencies,” he said.

“There is not even an iota of evidence brought to my notice connecting the perpetrators of the violence on 26.01.2021 with the said PJF or the applicant/accused,” Judge Rana added.

During last week’s hearing Judge Rana had specifically asked how certain motives could be presumed simply because Ms Ravi had met someone with bad credentials.

The police answered: “Everyone knows Mo Dhaliwal. Why would you meet with such a person.” The judge shot back: “No. I don’t know who is Mo Dhaliwal.”

Ms Ravi is accused by Delhi Police of creating and spreading an online document linked to the farmers’ protest against the centre’s agriculture laws – a document the police says was meant to revive a Khalistani group and “spread disaffection against the Indian state”.

Ms Ravi, who earlier this month told the court she had only edited two lines of the document and not created it, has said she only “wanted to support the farmers” in their campaign to get the controversial laws – which they say endangers their livelihoods – scrapped.

Under the terms of the bail, Ms Ravi must continue to co-operate (and not obstruct) with the investigation and not leave the country unless allowed by the court.

Shortly after her bail was granted, a second judge – Pankaj Sharma, the Chief Metropolitan Magistrate of the Patiala House Court – disposed off a Delhi Police application seeking extended custody; the police had sought further four days of custody.