Do You Know These Six Braveheart Women In Sikh History 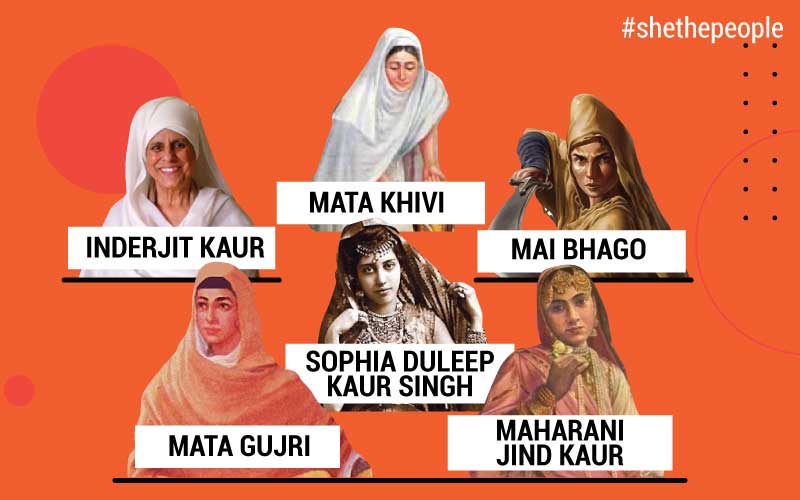 Women are the backbone of any society, culture, tradition and religion and Sikh history places women at par with the men. This equal position of women is evident in words of Guru Nanak Dev Ji, the first Sikh Guru. He said, “From the woman is our birth, and in the woman’s womb are we shaped. To the woman we are engaged and to the woman are we wedded. The woman is our friend and from woman is the family. Through the woman are the bonds of the world. Why then call her evil, who gives birth to the world’s leaders? From the woman is born woman, without the woman there is none”.

Mata Khivi was the wife of second Sikh Guru, Guru Angad Dev Ji. They came to Sikhism around the same time and through different people. And once Guru Ji got the Guruship, she took an important role in spreading the teachings of Sikhism to women. Apart from this, she stepped outside the realm of her house to spread and supervise the tradition of langar (meals to everyone) propagated by Guru Nanak Dev Ji. She used to take utmost care like an affectionate mother while cooking the meals. This made the langar to be an instrument of ‘Sewa’ (service), referred to as ‘Mata Khivi Ji da Langar’ (Mata Khivi Ji’s Langar). Furthermore, she is the only woman to have a reference in Guru Granth Sahib Ji (the holy scripture of Sikhs).

(Balwand, Khivi, is a noblewoman who gives soothing, leafy shade to all. She distributes the bounty of the Guru’s langar; the kheer- the rice pudding and ghee, is like sweet nectar.)

Today, Gurdwaras serve millions of people every day and serve as her legacy. She gave the message of equality which makes all the children of God entitled to food.

Mata Gujri was the woman of unwavering conviction with unmatched divinely shining legacy. She was the wife to Guru Teg Bahadur Ji, mother to Guru Gobind Singh Ji and grandmother to the four sahibzade. Above all, she was a woman of undying courage who emphasized on the institute on martyrdom. She did not bulge when the duty called her to sacrifice her family for dharma. Hence, she gave her followers the direction by walking on the path of death herself. She became distinguished by being the wife of saint martyr, mother of martyred king and grandmother of the bravest kids (four sahibzade). Eventually, she became the first female martyr in Sikh History. There is a shrine called Gurdwara Mata Gujri (Thanda Burj) at Fatehgarh Sahib near Sirhind in her honour where she spent the last days of her life.

Mai Bhago was the first woman to fight on the battlefield in Punjab for Guru Gobind Singh Ji. She grew up in Jhabal Kalan where she learned both the art of homemaking and warfare. Also, she was trained in martial arts, hand-to-hand combat, archery and gatka (Sikh swordsmanship). Above all, she was unafraid to challenge her husband and other men who had forsaken Guru Ji when they left the Khalsa Army after being outnumbered. She put on the battle outfit and strode to the battlefield of Khidrana (Battle of 40 Muktiyan or Muktsar) along with the 40 Sikhs, a radical symbol of what she felt empowered to do. She was the lone survivor in this battle. Finally, she became one of Guru Gobind Singh Ji’s bodyguards. Today, there’s a hall compound in Takht Hazur Sahib to mark the place where she resided.

Born in the 1660s, Mata Sundari Ji courageously provided the much-needed leadership after the death of her husband Guru Gobind Singh Ji. She helped in maintaining the Gurdwaras and the sanctity of Guru Granth Sahib Ji. As people say, under her rule, Sikhism was able to sustain itself and flourish for 40 years. She completed the unfinished works of the Tenth Sikh Guru and contributed significantly to the Sikh community. Furthermore, she faced all the misfortunes thrown at her to show the right path to the people. She was a mother but did not hesitate to disown her adopted son when he became power-hungry. Consequently, she became the inspiration we all look up for guidance. The compound of Gurdwara Bala Sahib, New Delhi houses her memorial today.

Unfortunately, most mainstream Sikh history doesn’t accord this leadership role to Mata Sundari, and only keeps her in the role of mothering her fearless sons.

She was a rebel and continued to be so until her death bed. Maharani Jind Kaur was the wife of the revered Maharaja Ranjit Singh of the Sikh Empire which at one point ruled all of Punjab. Also, she was his youngest wife. After his death, her son Duleep Singh came to power at the age of five. The British considered Jind Kaur aka Rani Jindan too rebellious. She ruled Punjab on behalf of her husband and believed in the power of Sikhs and of India against the Western rulers. But, she couldn’t hold on to the empire for too long as Sikhs lost Anglo-Sikh wars and she was soon after exiled to Nepal and separated from her son Duleep Singh.

She was born in modern-day Pakistan in Gujranwala to a family that oversaw the royal kennels. In January 1861, Duleep Singh was allowed to meet his mother in erstwhile Calcutta and took her with him back to England, where she remained until her death in Kensington, London, on 1 August 1863 at the age of 46. She was temporarily buried in Kensal Green Cemetery and cremated the following year at Nashik. The film Rebel Queen (2009) directed by Michael Singh tells her amazing story. She was considered a fearless Maharani who waged two wars against British rule in India. She remains a very inspiring countrywoman for Indian women even today.

Princess Sophia Duleep Kaur Singh was the granddaughter of Maharaja Ranjit Singh, the last King of Punjab and Rani Jind Kaur. Also, she was the goddaughter of Queen Victoria. While in England, she became a political radical and joined the suffragette struggle to give women the right to vote. For this, she used to adorn a yellow and green badge with her motto “Votes for Women”.

In light of this struggle, she refused to pay the taxes and participated in Women’s Tax Resistance. She also served as the President of the Committee of the Suffragette Fellowship. At times, she even clashed with the police. Posthumously, Royal Mail’s stamp set “Votes for Women” features her. The documentaries, Sophia: Suffragette Princess (2015) and No Man Shall Protect Us: The Hidden History of the Suffragette Bodyguards (2018) depict her struggle.

With nine decades of her life, Renaissance woman Inderjit Kaur has many accomplishments to her name. The lady with pleasant demeanour rehabilitated more than 400 refugee families during partition. She also set up Mata Sahib Kaur Dal School in Patiala for children of refugees. She became the first female Vice-Chancellor of North India by serving at the Punjabi University Patiala. This well-educated woman, when asked about being a feminist, retorted, “Not the bra-burning kind”. She has represented the country at various international conferences. She was among the three women university heads of the world at the International Conference of the Executive Heads of Universities, held in Boston, USA.

Several Sikh women have lived extraordinary lives. Their legacy inspires the coming generations to lead a better life. Even today, they are making many contributions in the world just like their ancestors.

Why Someone like Shiv Kumar had to be tamed
#FTIIMahabharat - Students get more support, mull legal option
Lot of natak over Sangeet Akademi's decision to honour director Sunil Shanbag
Kudankulam nuclear power project cost up 14%