Doctor, Doctor: Healthcare For The Homeless 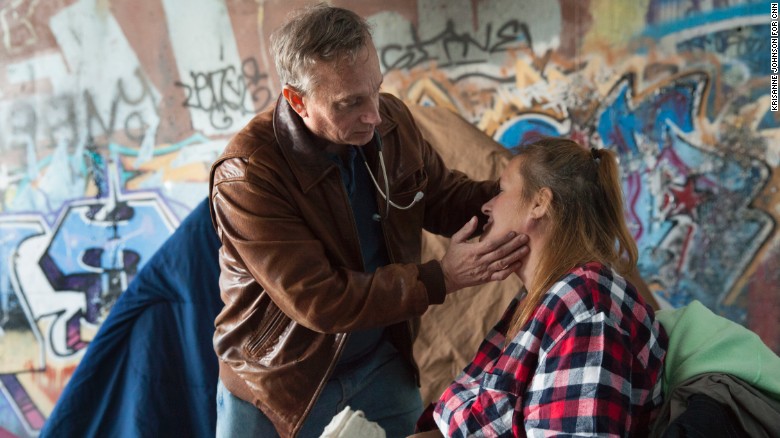 He used to dress like a homeless person. On purpose. Two or three
nights a week, he’d rub dirt in his hair and clothes before walking
the dark streets of Pittsburgh searching for the very people he was
trying to impersonate. This was his way of connecting with those who
had been excluded from healthcare. Meet Dr Jim Withers, a.k.a. Street
Doctor, who has pioneered the concept of street medicine.

As Founder and Medical Director of Operation Safety Net, part of
Pittsburgh Mercy Health System and Trinity Health, he, along with his
staff and a band of volunteers, brings quality healthcare to the
homeless right where they live – under bridges and overpasses, in
alleys, and along the rivers. Says Dr Withers, “I was really shocked
[to see] how ill people were on the street. It was like [being
transported] to a third-world country. Young and old, people with
mental illness, runaway kids, women [who had] fled domestic violence,
veterans… and each one has their own story.”

For over 23 years now, Dr Withers has been treating the homeless. He
explains his reasons for taking this stand, “As a teaching physician,
I became convinced that we needed a new [kind of] ‘class room’ in
which we could more directly experience the reality of those who were
socially excluded from healthcare, and from society in general.”

In 1992, he began to dress as a homeless person and interact with
those living on the streets. “My guide was a formerly homeless man and
soon there were other volunteer nurses, medical students and formerly
homeless partners who joined in. Realising that a new healthcare
system was emerging [one that is more commercially oriented], I
developed services, including electronic records, case management, a
hospital consult service, a medical education curriculum and an
office, specifically for the homeless,” he says, adding, “Over time,
we have grown to become a significant street medicine programme
providing 24×7 coverage for all those who sleep on the streets. We
have brought people into [the ambit of] primary care, housed over
1,200 chronically homeless persons in the past 11 years, created a
severe weather shelter, introduced legal services and educated over
100 students per year. Not only are the lives of many being saved [as
part of this initiative], but we have been able to reduce the costs
incurred by emergency rooms and hospitals.” When Dr Withers had
started Operation Safety Net it was a very novel concept. However, he
had figured out that, as healthcare increasingly became a profit
driven profession, a programme like this would have the potential to
make a real difference.

Interestingly, it was his time spent in India, as a medical student in
the early 1980s and then again in the early 1990s, when he had the
opportunity to meet up with Mother Teresa in Kolkata, that opened his
mind to the idea of practicing medicine for the benefit of the masses.
“I have a deep connection with India. In early Eighties, I was
influenced greatly by a two-month medical school experience I had in
Mysore [Karnataka] during which I saw scores of female burn victims
coming into the Mission Hospital. They seldom had any visitors and
would not speak to anyone. I sensed an indescribable sadness in them.
Many eventually died. When I asked the attending physician about this
situation he told me these incidents happened because the stoves were
dangerous and the women’s saris caught fire. It was much later that I
discovered that in reality these women had been burnt for dowry by
their husbands’ families. What was even more shocking for me was the
fact that this was a common occurrence and that the attending had
chosen to misrepresent this appalling reality. During that time I had
ended up marrying a south Indian woman whose brother-in-law was a
judge. He was constantly called to take statements from dying women
who had been burnt. Almost never would they testify against their
husband. I never forgot this brutal domestic violence and it later
encouraged me to dedicate my medical career to those who suffer from
all forms of social injustice,” he shares candidly.

He came back to India in 1993 after he had started Operation Safety
Net to look up a Dr Jack Preger, who was doing similar kind of work in
Kolkata. “He had been doing this since 1979 and I wanted get a chance
to interact with him; learn from his experiences. But as I was on my
way to call on him, on a whim, I decided to take a slight detour to
Mother’s Home. At the door, I told the nuns the work I was trying to
do and about street medicine and asked if the administrator would be
able to take out time to meet me and share the work being done at
Mother’s Home. To my immense surprise they invited me to meet with
Mother Teresa! I was able to spend nearly an hour with her during
which I found her to be a brilliant and forward-looking woman. Even
though she was in her eighties, she did not dwell on the past, but was
focused on the future. Her clear commitment to her principles
reinforced my own values. I saw how sending a clear, simple moral
message could have a global impact. Street medicine, I believe, is
having that same kind of impact,” explains the good doctor who
received CNN’s Top Hero Award last year.

Talking about homeless women he shares that “the percentage of women
living on the streets in the US has gone up in the last two decades –
it’s nearly 30 per cent today. Most of them have experienced some form
of violence and the majority has actually escaped domestic violence”.
According to him, homeless women generally battle with “depression,
post traumatic stress disorder, mental illness and addictions”. “All
of these issues are inter-related and cannot be addressed in
isolation. By ‘going to the people’, street medicine allows us to
become a part of their lives and gain their trust. Relationships
forged among those living on the streets are very complicated. As a
rule, I never force anyone to do what I think they should but simply
provide them with a consistent, loving support system so that they can
reclaim their own self determination,” he points out.

Gender violence, Dr Withers believes, has multiple, far-reaching,
physical and emotional consequences on the survivors living on the
streets. He says, “Denial and silence are the real enemies in such
cases. Nonetheless, I have seen how reaching out can result in
positive action. I have a dear friend who went through a lot before
she was able to get her life back in order. Lois had a long history of
unstable living circumstances, violence by those she trusted and
homelessness. I was called in to see her one winter; she was sleeping
next to a church in the snow. From that freezing night when we rescued
her it took her a long time to first trust us enough to help her and
then to get back on her feet. Her recovery has been a remarkable
lesson to us all.”

Having firmly established the efficacy of his programme Dr Withers is
hopeful that he would be able to take it to countries, especially
India, where it can truly impact the lives of those in dire need of
assistance and competent medical care. “Having street medicine in
every community transforms us,” he says, “We begin to see that we’re
all in this together. You can’t solve difficult problems if you can’t
get close enough to see them. That’s why I insist on ‘going to the
people’.”

India - BJP has highest no. of MPs, MLAs with cases of crime against women #Vaw
Sunanda Pushkar murder case: 3 suspects who covered it all up?
Joint Statement Condemn Police Excesses in Lower Suktel Project area in Balangir, Odisha
BJP leader among 90 held for Vadodara violence