‘Donald Duck? He is the Emperor of the World!’ 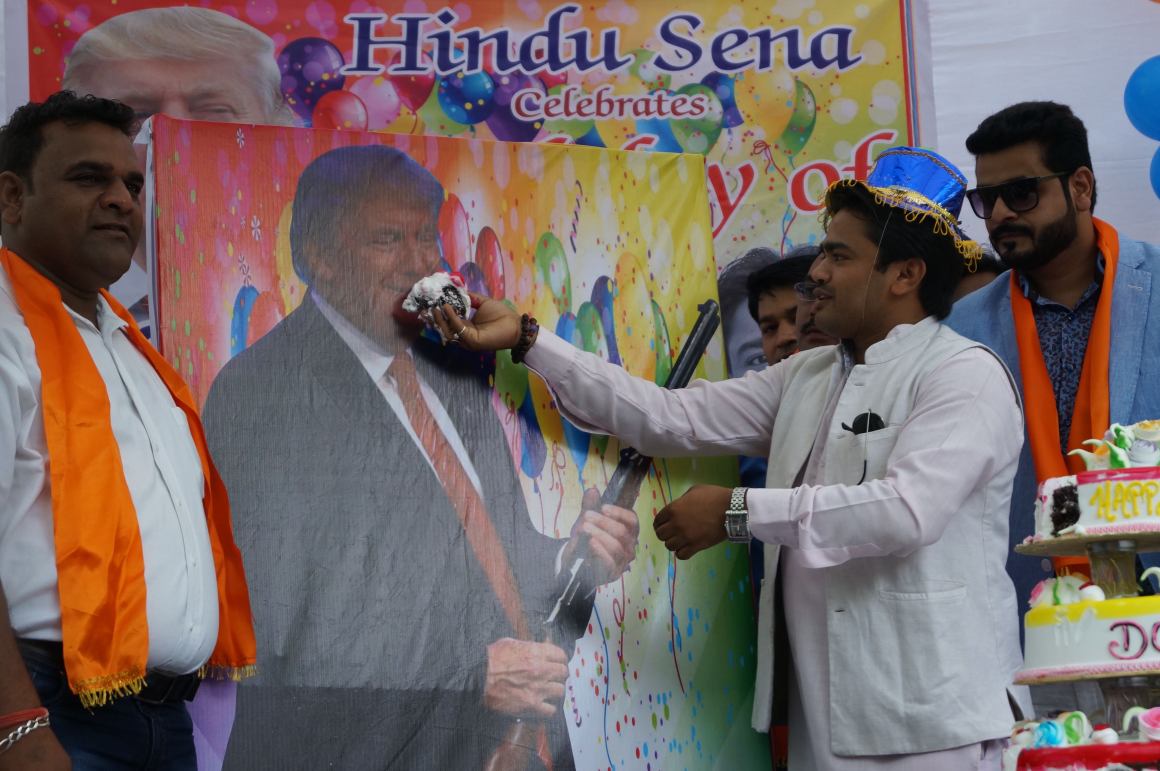 A tweet announced that a group called the Hindu Sena would be celebrating the birthday of Donald Trump, and welcomed everyone for their celebrations. By noon a bunch of media people had reached Jantar Mantar. Inside a makeshift tent was a flex wishing Trump, the Republican candidate for the approaching US presidential election, a happy birthday. Another framed flex showed Trump carrying a double-barrel rifle. A table in the centre, decorated with blue and orange balloons, awaited a cake. Eventually a couple of boys brought out their guitars and a kahoon that had been hidden below the table. They were the live orchestra for the occasion.

Vishnu Gupta, founder and national president of the Hindu Sena, wore a pale pink kurta-pyjama and a white waistcoat. He emerged leading a loyal following of about 20 young men. The same party made news on a previous occasion, when they ransacked the kitchen at Kerala Bhavan, alleging that beef was being served there.

Gupta is a self-proclaimed bhakt of Trump. Members of his Sena brought in a three-tier cake. On each level was written, ‘Happy Birthday’, ‘Donald’ and ‘Trump’. “It weights seven kgs!” said an excited Gupta as he went about arranging it.

One of the group fished out bright orange scarves for everyone to wear them around their necks. Another member had a plastic bag filled with shiny party caps. ‘Yeh Daanal Trump ka favourite colour hai!” (This is Trump’s favourite colour) said Gupta, as he put on a metallic blue cap. Others in the group were given red caps. This explained the blue balloons hanging everywhere. 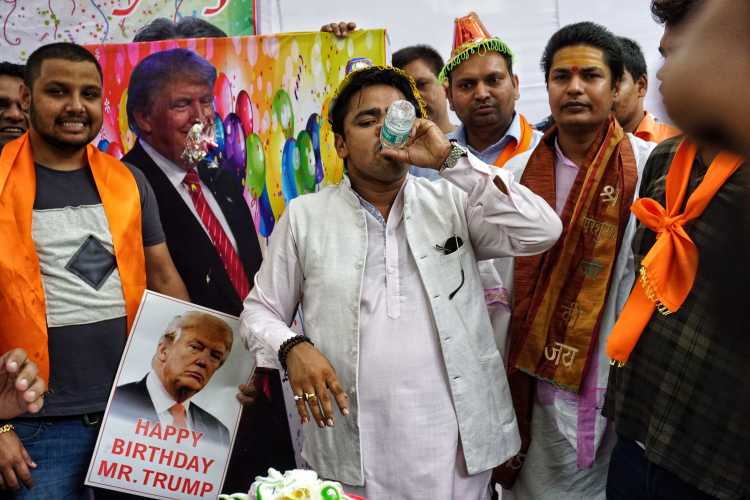 After the celebrations. Credit: Shome Basu

A press photographer objected that the flex showing Trump with the gun was being covered. The framed flex was repositioned next to Vishnu. ‘Orlando me jo Islamic aatankvaad dwara maare gaye, unke aatma shaanti ke liye ek minit ka maun rakha jaayega.’ Gupta announced (‘A minute’s silence for those who died in Orlando because of Islamic terrorism’).

The orchestra was signalled to begin. The group sang ‘Happy Birthday Donald Trump’ in every pitch possible. Gupta cut the cake. He scooped up a slice of it and held it where Trump’s mouth was printed on the flex. He then fed his colleagues, all of whom seemed excited as a small group of journalists looked on.

‘Does Trump know you and your group exist?’ I asked.

‘Par Orlando me jo hadsa hua, woh samlaingink group ke khilaaf hua! Aapke kya vichaar hain?’ I asked. (The attacks in Orlando targeted homosexuals. What is your take on that?)

‘Jinke khilaaf bhi hua ho… woh Islamic aatankvaad tha. Waisey homosexuality hamare sanskriti ke khilaaf hai. Uske khilaaf ham bhi hain!’ (Whoever is was against, it was Islamic terrorism. By the way, Indian culture is against homosexuality. We are also against it.)

‘But aren’t you against guns? You’ve even showed Trump holding one. The attack was possible because of gun laws, right?’

‘Yeh mera favourite photo hain. Trump hamare vishwarakshak hain. Hamara raja hain’ Gupta proclaimed. (This is my favourite photo. Trump is the saviour of this world. He is our king!)

The man had little to say, excepting repeat these words of admiration. As other members of the press began to ask him questions, I spotted one of the Sena wearing a t-shirt that had Donald Duck on it. I asked him why he supported Trump.

The young man looked confused. ‘Donald Duck? Woh tho duniya ka Shahanshah hain! Ham unke janamdin manaane aaye hain aur unko support karne!’ (Donald Duck? He is the emperor of this world! We are here to celebrate his birthday and support him!”). I asked if I could take his photo. He became self-conscious and backed into his group. Meanwhile one of the members began poking the balloons with the knife they had used to cut the cake, and everyone shouted ‘Donald Trump Zindabad! Bharat Mata Ki Jai!’ (Long live Donald Trump, Victory to Mother India!)

As I exited the tent, opposite this whole fiasco I saw two placards left behind by an earlier protest. ‘Hamari Bhool, Kamal Ke Phool’ and ‘Bharat Ke Bachchon Ko Bachaao’ (Our mistake: the lotus flower) and (Save India’s children!). These two placards ironically brought us back to the hard hitting reality of our times. They both struck close to home.