Don’t abandon the walking class: Help is needed for those in hapless transit on roads, highways, trains and media photos 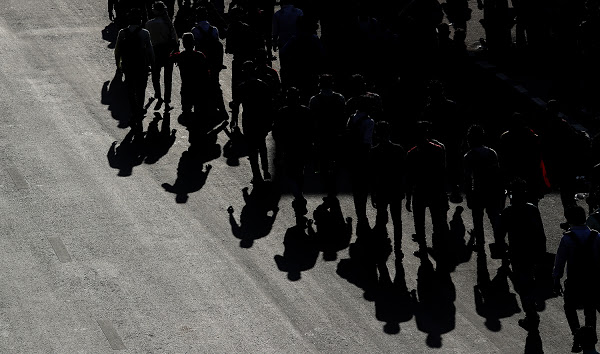 In this Friday, March 27, 2020, file photo, migrant daily wage laborers make the journey to their respective villages on foot following a lockdown amid concern over spread of coronavirus in New Delhi, India. Over the past week, India’s migrant workers - the mainstay of the country’s labor force - spilled out of big cities that have been shuttered due to the coronavirus and returned to their villages, sparking fears that the virus could spread to the countryside. It was an exodus unlike anything seen in India since the 1947 Partition, when British colothe subcontinent, with the 21-day lockdown leaving millions of migrants with no choice but to return to their home villages. (AP Photo/Manish Swarup, File)

Never was so little owed by so few to so many. And so we continue to see processions of these so many, their figures – and faces, if we have the time or inclination – segueing into one blob of a species: homo mercennarius autem migrans.

India has been used to processions in its various nomenclatures – ‘march’, ‘michhil’, even the barely used ‘juloos’. Such processions bear the weight and mass of the political, of a strategically minded protest, however naive this kind of strategy may be. In the more innocent sense, the procession can be celebratory (as in a wedding) or funereal (as in a funeral).

Crowds are the only real ingredient for such processions, usually associated with holding up the traffic. And for them, as the glib line goes, the journey is the destination. Whether the procession moves from India Gate to Jantar Mantar, or from the groom’s house to the wedding reception venue, or from a home to the crematorium is secondary. The procession itself is the main point – to showcase protest, celebration, or mourning.

That is not the case with the processions making long treks back to their home towns or villages from cities and urban centres where means of their livelihood have stopped – overnight – since the midnight of March 24-25. With little to no savings to dip into during this 52 days-and-counting Covid-instigated lockdown and layoffs, their journey is certainly not the destination; their destination is the destination. It is a self-rescue mission closer to historically sepiaed ‘moments’ of 1947 and 1971.

But unlike the traditional notion of the procession, these self-rescuing exoduses are atomised. Apart from teeming, social distancing-distanced crowds forming in bus depots and railway stations, many of these processions have been walks by individuals or small groups of families, that to us morning or evening walkers will seem interminable. But to these walkers, their walk is terminable, reaching the terminal being the whole point and purpose of their terrible but hopefully life-saving pilgrimage.

Despite both central and state government authorities claiming to have made provisions for such travellers – perhaps modelled on the amenities provided to kanwariyas in happier, pre-Covid days – on the ground, many of these facilities do not exist, or are patchy. The trains are running again. But confusion has already ensued, with planned trains cancelled, towing streams of people along in their tracks.

This is no Mahaprasthanika, or Great Journey, where the Pandavas walked their way up to heaven on Mt Sumeru from Indraprastha. And more than four Pandavas and Draupadi will languish during their passage from India to their homes, in India – as so many already have, including the 16 killed on the tracks by a freight train near Aurangabad, not to mention people walking along highways killed by speeding vehicles earning a separate daily count of their own.

That these people are collectively, and not incorrectly, being described as ‘workers’, ‘migrant workers’ to be more precise, perhaps makes it easier to deal with them as (only) a ‘kind of people,’ rather than individuals likely to share the physical and mental characteristics, demands, capabilities and limitations with people who have not had to face the choice of staying or leaving, to literally sustain their bodies.

Not only are the distances to be traversed if transport is unavailable or unreachable inhuman, but so is the time. The longer one delays the decision of whether to stay or leave, the tougher it gets if that decision is wrong and help doesn’t arrive.

The ease with which the authorities, never mind the ’employee classes’, are able to dehumanise them when needed – during ‘peacetime’ they double as the ‘electorate’ – was evident with the Karnataka government stopping the plan of trains transporting them to their home states. The reason cited was that Karnataka’s industry could not afford the sudden flight of labour. Luckily, decision makers in the original IT City of India, from where so many H-1Bs bloom, decided to let these trains run the very next day.

Industry is keen that blue/no-collar workers are now allowed to quickly get back to work so that companies and firms don’t bleed to death, and, in the process, these workers can earn their daily pav again. But many of these people – walkers-workers – by dint of human metabolism, never mind economics, do not have the kind of cushion that would allow them to ‘make sacrifices’ and ‘dig deep’ and first resist and then grudgingly normalise the ‘new normal’.

The moving members of these processions need that cushion from government and society now. Some help has been provided in GoI’s stimulus package announcement yesterday. More is needed to get them off the walking track, and back in a living space.

Industry is worried that these people won’t return, at least not in a hurry, delaying the nation-rebuilding project. But many of them are preferring to be atma nirbhar (self-reliant), the trust holding up a different kind of supply chain broken. Contemplating ‘disciplinary action’ against workers who don’t return to work ‘by a specified time’, as some states reportedly are, is not the best way to reestablish this trust. For a country – nay, economy – that chants ‘demographic dividend’ as a karmic mantra, such a policy makes little HR sense.

A vanished workforce, surely, would be far more horrible than the ‘old normal’ apathy towards these still-cheaper-than-AI working ‘classes’.

Why is govt afraid of a wheelchair bound former professor of Delhi University with 90% disability
IMMEDIATE RELEASE- CPI(ML) General Secretary Dipankar Bhattacharya Arrested while Entering Koodank...
India - Who's talking exodus in Kairana?
#BhimaKoregaonArrests: UAPA is writing the obituary for Indian democracy by curbing dissent and must...